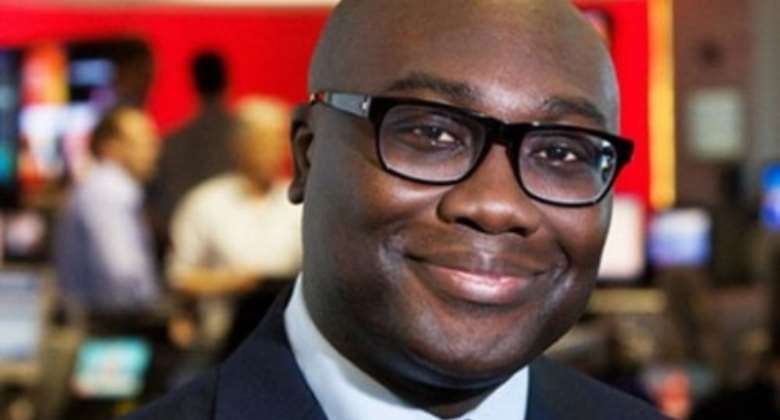 Komla Dumor BBC Small Komla was born 3 October 1972 in Accra to a family of academics. His mother, Cecilia, was an educationist, editor and writer of children's books, and a key influence in encouraging Komla to take up journalism. His father, Ernest, was a professor of sociology, and his sister, Mawuena, a geologist, who worked in communications for mining companies.

His grand- father Philip Gbeho was a renowned musician who was asked by the country's founding father, Kwame Nkrumah, to compose the country's national anthem following independence in 1957. Komla was said to have inherited both his powerful voice and striking physique.

Komla attended St Thomas Secondary School in Kano State, Nigeria, and then won a place at the University of Jos in Plateau State to study medicine in the late 1980s. However, unlike his brother, Korshie, who went on to become a doctor, Komla returned to the University of Ghana to take up a degree course in sociology and psychology and then studied for a master's in public administration at Harvard.

During his time as a radio broadcaster in Ghana he took a pride in his attempts to challenge corruption in the public sector. Komla started his broadcasting career on the back of a motor scooter, negotiating the crowded streets of Ghana's capital, Accra, telling Joy FM listeners how to beat traffic jams and then racing off to attend lectures at the University of Ghana.

By the time Joy FM, the country's leading commercial radio station, offered him the role of host of its morning show in 2000, Komla had become a household name. It was a busy news year for Ghana, as the country elected a successor as president to the soldier-turned-civilian Jerry Rawlings. He was the Journalist of the Year 2003 awarded by the Ghana Journalists Association.

In 2006, Komla moved to London to join the BBC's African service. Three years later he became the pioneer presenter of Africa Business Report, a monthly BBC World News television programme that each time took him to a different country on the continent.

With BBC Radio facing stiff competition in Africa, in 2012 the corporation launched Focus on Africa, a daily news and current affairs television programme, and Komla was the natural choice to host it. He fronted it till the day before he died.

Asked what he loved about Africa, he once replied: "Its resilience. After all we have been through, we are still here." In November 2013, New African magazine named Komla as one of the 100 most influential Africans.

He married Kwansema Quansah, a lawyer, in 2001. She survives him, along with their daughters, Elinam Makafui and Emefa Araba, their son, Elorm Efadzinam, and siblings, Ernest, Mawuena and Korshie.