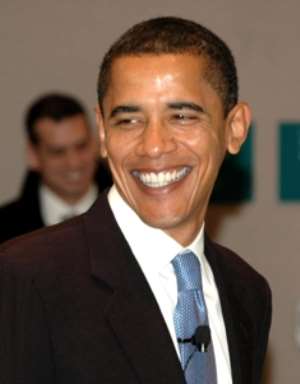 President Barack Obama acted swiftly after his inauguration on Tuesday (January 20th, 2009), suspending all trials at the Guantanamo Bay detention camp for 120 days, and freezing all last-minute legislation—known as "midnight legislation"—passed by former President George W. Bush. Obama also plans to meet with military and economic advisors today (January 21st, 2009) to discuss the $825 billion fiscal stimulus package as well as the Iraq war.

Obama's request on Guantanamo would stop the proceedings for 21 pending cases, including the death penalty case against the five prisoners accused of plotting the September 11th attacks. The president has made it known over the last few months that he intends to shut down the prison camp at Guantanamo, the detention center that was viewed globally as a gross violation of human rights. Plans are also in the works to have American troops withdraw from Iraq over a period of 16 months, and aides say Obama is also considering pulling all troops before the planned date of 2012.

The president's cabinet appointments are also in their last stages of approval through the U.S. Senate today. Officials are set to debate, and most likely approve, Sen. Hillary Clinton as secretary of state, in addition to Janet Napolitano for homeland security secretary; Steven Chu as energy secretary; and Timothy Geithner for treasury secretary.

Biography: Barack Hussein Obama was born Aug. 4, 1961, in Honolulu, Hawaii. His father, Barack Obama, Sr., was born of Luo ethnicity in Nyanza Province, Kenya. He grew up herding goats with his own father, who was a domestic servant to the British. Although reared among Muslims, Obama, Sr., became an atheist at some point.

Obama's mother, Ann Dunham, grew up in Wichita, Kansas. Her father worked on oil rigs during the Depression. After the Japanese attack on Pearl Harbor, he signed up for service in World War II and marched across Europe in Patton's army. Dunham's mother went to work on a bomber assembly line. After the war, they studied on the G. I. Bill, bought a house through the Federal Housing Program, and moved to Hawaii.

Meantime, Barack's father had won a scholarship that allowed him to leave Kenya pursue his dreams in Hawaii. At the time of his birth, Obama's parents were students at the East–West Center of the University of Hawaii at Manoa.

Obama's parents separated when he was two years old and later divorced. Obama's father went to Harvard to pursue Ph. D. studies and then returned to Kenya.

His mother married Lolo Soetoro, another East–West Center student from Indonesia. In 1967, the family moved to Jakarta, where Obama's half-sister Maya Soetoro–Ng was born. Obama attended schools in Jakarta, where classes were taught in the Indonesian language.

Four years later when Barack (commonly known throughout his early years as "Barry") was ten, he returned to Hawaii to live with his maternal grandparents, Madelyn and Stanley Dunham, and later his mother (who died of ovarian cancer in 1995).

He was enrolled in the fifth grade at the esteemed Punahou Academy, graduating with honors in 1979. He was only one of three black students at the school. This is where Obama first became conscious of racism and what it meant to be an African–American.

In his memoir, Obama described how he struggled to reconcile social perceptions of his multiracial heritage. He saw his biological father (who died in a 1982 car accident) only once (in 1971) after his parents divorced. And he admitted using alcohol, marijuana and cocaine during his teenage years.

After high school, Obama studied at Occidental College in Los Angeles for two years. He then transferred to Columbia University in New York, graduating in 1983 with a degree in political science.

After working at Business International Corporation (a company that provided international business information to corporate clients) and NYPIRG, Obama moved to Chicago in 1985. There, he worked as a community organizer with low-income residents in Chicago's Roseland community and the Altgeld Gardens public housing development on the city's South Side.

It was during this time that Obama, who said he "was not raised in a religious household," joined the Trinity United Church of Christ. He also visited relatives in Kenya, which included an emotional visit to the graves of his father and paternal grandfather.

After law school, Obama returned to Chicago to practice as a civil rights lawyer, joining the firm of Miner, Barnhill & Galland. He also taught at the University of Chicago Law School. And he helped organize voter registration drives during Bill Clinton's 1992 presidential campaign.

Obama published an autobiography in 1995 Dreams From My Father: A Story of Race and Inheritance. And he won a Grammy for the audio version of the book.

Obama's advocacy work led him to run for the Illinois State Senate as a Democrat. He was elected in 1996 from the south side neighborhood of Hyde Park.

During these years, Obama worked with both Democrats and Republicans in drafting legislation on ethics, expanded health care services and early childhood education programs for the poor. He also created a state earned-income tax credit for the working poor. And after a number of inmates on death row were found innocent, Obama worked with law enforcement officials to require the videotaping of interrogations and confessions in all capital cases.

In 2000, Obama made an unsuccessful Democratic primary run for the U. S. House of Representatives seat held by four-term incumbent candidate Bobby Rush.

Following the 9/11 attacks, Obama was an early opponent of President George W. Bush's push to war with Iraq. Obama was still a state senator when he spoke against a resolution authorizing the use of force against Iraq during a rally at Chicago's Federal Plaza in October 2002.

"I am not opposed to all wars. I'm opposed to dumb wars," he said. "What I am opposed to is the cynical attempt by Richard Perle and Paul Wolfowitz and other arm-chair, weekend warriors in this Administration to shove their own ideological agendas down our throats, irrespective of the costs in lives lost and in hardships borne."

"He's a bad guy," Obama said, referring to Iraqi dictator Saddam Hussein. "The world, and the Iraqi people, would be better off without him. But I also know that Saddam poses no imminent and direct threat to the United States, or to his neighbors, that the Iraqi economy is in shambles, that the Iraqi military a fraction of its former strength, and that in concert with the international community he can be contained until, in the way of all petty dictators, he falls away into the dustbin of history."

"I know that even a successful war against Iraq will require a U. S. occupation of undetermined length, at undetermined cost, with undetermined consequences," Obama continued. "I know that an invasion of Iraq without a clear rationale and without strong international support will only fan the flames of the Middle East, and encourage the worst, rather than best, impulses of the Arab world, and strengthen the recruitment arm of al-Qaeda."

The war with Iraq began in 2003 and Obama decided to run for the U.S. Senate open seat vacated by Republican Peter Fitzgerald. In the 2004 Democratic primary, he won 52 percent of the vote, defeating multimillionaire businessman Blair Hull and Illinois Comptroller Daniel Hynes.

That summer, he was invited to deliver the keynote speech in support of John Kerry at the 2004 Democratic National Convention in Boston. Obama emphasized the importance of unity, and made veiled jabs at the Bush administration and the diversionary use of wedge issues.

"We worship an awesome God in the blue states, and we don't like federal agents poking around our libraries in the red states," he said. "We coach Little League in the blue states, and yes, we've got some gay friends in the red states. There are patriots who opposed the war in Iraq, and there are patriots who supported the war in Iraq. We are one people, all of us pledging allegiance to the Stars and Stripes, all of us defending the United States of America."

After the convention, Obama returned to his U.S. Senate bid in Illinois. His opponent in the general election was suppose to be Republican primary winner Jack Ryan, a wealthy former investment banker. However, Ryan withdrew from the race in June 2004, following public disclosure of unsubstantiated sexual allegations by Ryan's ex wife, actress Jeri Ryan.

In the November 2004 general election, Obama received 70% of the vote to Keyes's 27%, the largest electoral victory in Illinois history. Obama became only the third African-American elected to the U.S. Senate since Reconstruction.

Sworn into office January 4, 2005, Obama partnered with Republican Sen. Richard Lugar of Indiana on a bill that expanded efforts to destroy weapons of mass destruction in Eastern Europe and Russia. Then with Republican Sen. Tom Corburn of Oklahoma, he created a website that tracks all federal spending.

Obama was also the first to raise the threat of avian flu on the Senate floor, spoke out for victims of Hurricane Katrina, pushed for alternative energy development and championed improved veterans´ benefits. He also worked with Democrat Russ Feingold of Wisconsin to eliminate gifts of travel on corporate jets by lobbyists to members of Congress.

His second book, The Audacity of Hope: Thoughts on Reclaiming the American Dream, was published in October 2006.

In February 2007, Obama made headlines when he announced his candidacy for the 2008 Democratic presidential nomination. He was locked in a tight battle with former first lady and current U.S. Senator from New York, Hillary Rodham Clinton until he became the presumptive nominee on June 3, 2008. On November 4th, 2008, Obama defeated Republican presidential nominee John McCain for the position of U.S. President. He is now the 44th president of the United States.

Obama met his wife, Michelle, in 1988 when he was a summer associate at the Chicago law firm of Sidley & Austin. They were married in October 1992 and live in Kenwood on Chicago's South Side with their daughters, Malia (born 1998) and Sasha (born 2001).