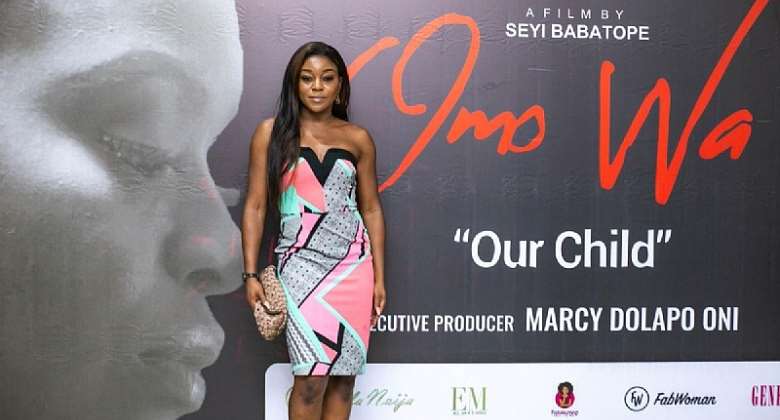 The short film shows the struggles of an expectant woman who tries to work hard to figure out why her husband is not on the same page as her as they both embark on a new phase in their lives.

Directed by Seyi Babatope, Omo Wa the young couple are played by Folarin (played by Baag Adebuke) and Salewa, (Marcy Dolapo Oni) who live in Lagos.

Dolapo said “ I’m calling this year, the year of the mother because it seems my entire projects are centered around motherhood. I’m talking about what I know and what I’m currently experiencing. That’s why I produced a short film about pregnancy and motherhood and the fact that it is what women are going through, and it can be tough – you have two people who are about to parents, it can be exciting but at the same time the couple may be processing things in completely different ways - it is something I wanted to highlight.”

The short film, being only 15 mins long was impactful and met with rave reviews, the screening was quickly followed by a panel session which was moderated by Toyosi Etim- Effiong, joining here were Marcy Dolapo Oni, Tito Bez-Idakula, Oscar Oyinsan, Anita Okoye, and Noble Igwe who spoke through the issues depicted in the film and on how creating a healthy family is part of a growth process.

Synopsis of Omo Wa
The pregnancy journey is a profound one. Many women find greater purpose in their lives by becoming mothers although it is not always the case. But it is no less a profound journey for a man. We see Folarin and Salewa, a young couple living in Lagos, as they maneuver their way through their relationship. They are about to embark on a new phase of their lives. Parenthood. While all seems well and straight forward, cracks soon begin to show as it becomes clear they are not on the same page. While becoming a parent, in theory, sounds wonderful the reality of it becomes all too daunting for Folarin.

See all the photos from her TW Magazine Cover and the premiere below!

A/R: One dead, six arrested after clash over land at Adum Af...
59 minutes ago

You are going to IMF because of the way you mismanaged covid...
1 hour ago