Fans Responsible For Our Quarrel—P-Square 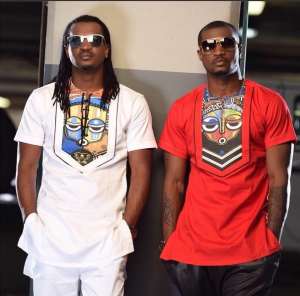 The duo of Peter and Paul in a recent interview have disclosed that their fans were the once that helped escalated the crisis between them.

According to the Square brothers, they are human and have blood running through their veins and as such wants their fans to know that brothers and parents do quarrel and reunite again.

Peter explained that though he was not under pressure when the crisis occurred but as time went on, he started feeling it as the fans kept challenging him on the whereabout of his brother Paul.

P-square noted that though they had issues with each other, but it never had any effect on their songs because the group were still together.

Peter despite blaming the fans, also attested that they helped make them identify their difference and they were able to come back together as one.

They also thanked some top officials in the country who also lend their view and advice towards ensuring that they came back as brothers.

Speaking on their new album, they revealed that they want to break the record which they set with the 'Do Me' video which they say is still their best song.