'Which Blood is Thicker Than The One Of My Children?- Peter Okoye Replies Critics 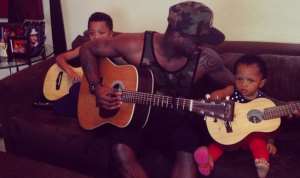 Peter Okoye of singing duo Psquare has been receiving insults and criticisms from his fans for not attending his elder's brother wedding at Anambra state on the 17th of July.

Peter was busy having fun with his friends while the wedding was going on and since then lots of fans have been attacking him on social media. Peter ends up fueling rumour that all isn't well between the Okoye brothers. It would be recalled that Jude was also absent at Peter's wedding to Lola last year, a reason many think Peter also decided to fight back.

Meanwhile, Peter has opened another chapter to the on going feud. He took to Twitter late last night to say the music group, P-Square is made up of just Peter and Paul, leaving out Jude's name, but fans acknowledge Jude's huge contributions to making the group a success.

He also said the only family he knows is the one he built "mufus talking about family! My number one family for now is the one I built,and nobody can change that amount, Does your mum and dad care about there own siblings more than they care for you, mufus."

He also made an outburst saying that no blood is thicker than the one of his children, stating that anyone who talks shit again will be blocked. The angry Peter also called the people talking hypocrites and mufus.