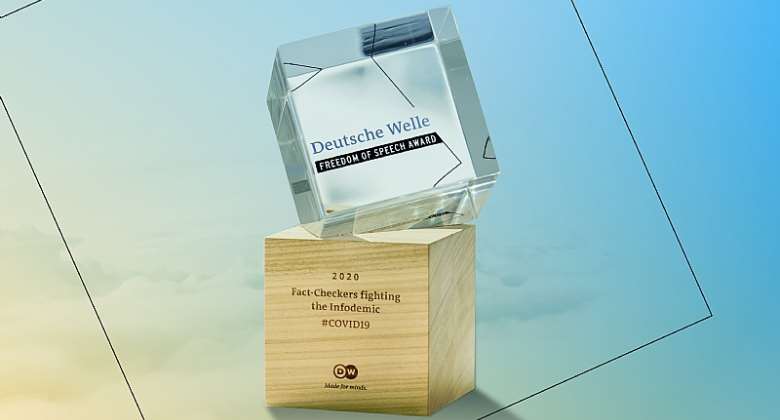 DW Director General Peter Limbourg: ‘The Freedom of Speech Award 2020 is dedicated to all courageous journalists worldwide who are suffering repression because of their reporting on the pandemic’

"We honor all our colleagues who are being prevented by force from doing their job in these difficult times,” DW Director General Peter Limbourg said in Berlin. “Deutsche Welle is demanding that all journalists worldwide, who have been arrested because of their coverage of the COVID-19 crisis, are released immediately.”

Since 2015, DW has presented the prize annually to a person or initiative for showing outstanding commitment to human rights and freedom of expression in the media. In 2020, in the midst of the Corona crisis, DW has decided to honor 17 journalists from 14 countries, representing all journalists worldwide who have disappeared, were arrested or threatened because of their reporting on the COVID-19 pandemic.These are the laureates: https://p.dw.com/p/3bfKj

UN High Commissioner for Human Rights and former President of Chile Michelle Bachelet is this year’s laudatory speaker. “Now, more than ever, we need information to flow, and people to have access to it,” Bachelet said in a video message. “Governments need information to make accurate decisions that respond to the realities on the ground. The general public – all of us – need full and accurate information about the pandemic, and to be involved in the decisions that are being made on our behalf. Participating in those decisions increases people's understanding of, and compliance with, measures that are being taken.”

Bachelet added: “It is shocking, in such a context, that journalists are being attacked, threatened, arrested, accused of spurious crimes and even disappeared because of their reporting about the pandemic. These are attacks on media freedom, and attacks on the public's right to be informed.”

One reaction of many governments around the world to the COVID-19 pandemic has been the violation of human rights, especially the freedom of expression and media freedom. Politicians manipulate data, withhold facts and launch personal attacks on journalists. Detained journalists remain in prison despite the spread of the virus.

According to international organizations like RSF, IPI and CPJ, journalists reporting on the Corona crisis have disappeared, been arrested or threatened over the last few months. Reports of incidents come from a growing list of countries including China, Iran and several African and Latin American countries. DW honors all these journalists for their stance on the freedom of the media in the light of the threats posed to them by governments and security forces.

UN High Commissioner Bachelet: “I am here to honor the courage of the journalists who, despite such attacks, speak up and continue to investigate and report critically without fear. I pay tribute to the courage of those who have been disappeared, arrested or threatened for their work. My office and the United Nations will continue to stand up for their rights.”

“At a moment of a global health emergency, journalism serves a crucial function and each journalist bears great responsibility. Citizens of any country have the right of access to fact-based information and critical findings,” Limbourg said. “Any form of censorship may result in casualties and any attempts to criminalize coverage of the current situation clearly violate the freedom of expression.”

Former laureates of the DW Freedom of Speech Award

The Freedom of Speech Award ceremony is usually one of the highlights of the Deutsche Welle Global Media Forum in Bonn, Germany, which this year was canceled due to COVID-19. However, the award will still receive broad coverage on DW’s TV channels, news websites and social media in 30 languages.