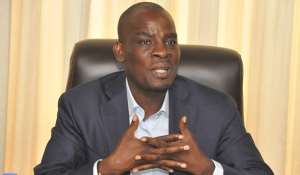 Plans by the Electoral Commission (EC) to compile a new voters' register for this year's December general elections have left members of the opposition National Democratic Congress (NDC) anxious, with relentless 'negativity' and 'a skewed view' about the exercise.

The Minority Leader, Haruna Iddrisu, has confirmed that the biggest opposition party is living in 'uncertainty' about the register the EC will use for the presidential and parliamentary polls scheduled for December 7, 2020.

In Parliament on Friday, May Day, the NDC Member of Parliament (MP) for Tamale South Constituency expressed fear of his party becoming a victim of what he claimed to be an unfair and not credible election to be conducted by the EC.

He stated that it was regrettable that some seven months into the presidential and parliamentary elections there was still a debate about the kind of electoral roll that would be used by the EC.

Delivering his closing remarks as the House was set to adjourn sine die the First Meeting of the Fourth Session of the Seventh Parliament, the Minority Leader said, “It is regrettable that, Mr Speaker, at this hour – eight (seven) months into presidential and parliamentary elections, Ghana is still debating what time and which register or electoral roll will be used for the purpose of the elections.”

“Our position on the matter has not changed. What we want is free, fair and credible elections to be conducted by the Electoral Commission. It must respect Article 42 of the 1992 Constitution,” Mr. Iddrisu stated.

The NDC MP continued that it was interesting the birth certificate which gave birth to a passport and the National Identification card had been made an unqualified document by the EC for registration.

The EC, as part of the process to compile a new register, accordingly, asked Parliament to amend Regulation 1 of Constitutional Instrument (C.I.) 91 to enable the national identification card and passport to be used as the only evidence of identification for a person who applies for registration as a voter.

The amendment will also allow two registered voters to guarantee for any person without a national identification card or passport, and would become the substitution for sub-regulation (4) of 4 of the C.I. 91

But the amendment has excluded a driver's licence and the existing voter identification card from documents to be presented as evidence of identification as a Ghanaian citizen, and the NDC is crying foul.

Sarcastic Haruna Iddrisu said, “Only in Nana Addo-Dankwa's Ghana that birth certificate is no longer a relevant document for purpose of voter registration in pursuance of Article 42 of the Constitution.”

“It is like your son is a citizen but the grandmother or grandfather is not a citizen. That is what we have seen happening in Ghana,” he said.

The NDC MP, on April 30, demanded the EC to be summoned to Parliament to brief the House about its preparedness for this year's presidential and parliamentary elections.

According to the Minority Leader, it is important for the country to know the roadmap for the December 7 elections in the midst of the coronavirus (Covid-19) pandemic, indicating that the 1992 Constitution requires that the presidential and parliamentary elections be held this year.

However, the Majority Leader, Osei Kyei-Mensa-Bonsu, responded that the EC would not conduct any voter registration exercise until the maturation of the new Constitutional Instrument (C I) laid before the House.

The news immediately calmed the nerves of the opposition MPs, particularly when he said there was a legal duty for the EC not to begin the registration exercise, intimating that whoever was alleging that the EC would go ahead to compile a new voters' register, whilst Parliament was in recess, was doing so “in ignorance.”

“We are to know that the EC cannot do any registration for now even if it intends to do so because the constitutional instrument it submitted to us has not matured.”

“So no registration exercise can go on without the maturation of the CI. It is as simple as that. So whoever is alleging that is doing so in ignorance; it is complete ignorance. The EC cannot do and it is not doing that. They know what they are required to do if they intend to do what they advertised earlier,” the Minister of Parliamentary Affairs posited.