Paul Adom-Otchere Was Just Singing For His Supper -Must Apologise To Dr. Zanetor Rawlings 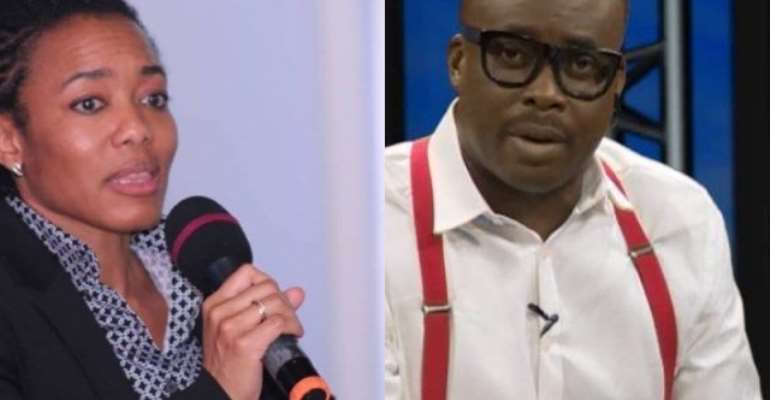 As much as I respect freedom of expression I was highly disappointed by the behaviour by that gutter journalist. As Africans, we should respect leaders (young or old) particularly putting into context that Hon. Dr. Zanetor Rawlings is occupying a revered position of a member of Parliament.

The silly remarks Paul Adom-Otchere made on his programme (Good evening Ghana) and the Mayor of Accra's appearance on the show after Paul's uncouth behaviour, proved that it was a pre-planned onslaught on Dr. Zanetor Rawlings.

If journalism in Ghana has come to be this, then God helps Ghana since nobody has monopoly over such uncouth misconduct. I am shocked at how such a gutter journalist could have access to important places including being at an arm's-length of the President. The conduct of Paul not only showed serious contempt and disrespect for Parliament and Dr. Zanetor respectively but also exposed his platform's complicity in the whole media stunt.

The Ghanaian media is now the junior team of the NPP and the Akufo-Addo government. There is a credibility crisis, in that some television and radio programmes, in particular, are driven by a tendency to put sensation and unnecessary propaganda above sense in the search for ratings. Journalists like Paul Adom-Otchere who survive on government officials support, always show an unwillingness to robustly challenge the official narrative on key issues partly out of their own failings but also largely out of fear of being denied access to the presidency and government officials. It is unethical to use your media platform run down people. He did exactly what he accused Zanetor of. And did the Gender minister and the Mayor call Zanetor before reacting publicly to her statement? Did Paul give Dr Zanetor the opportunity to explain or clarify her statement? He did not do any of the above but decided to run down the lady on his show just to appease his pay masters.

A journalist accepting money, government contracts or gifts to attack opponents of his or her paymaster violates his or her trust with the audience. The audience always expect that journalists operate with their interest at heart. A story is worthy of coverage because it benefits the public in some way, not because of the bribe or gift the presenter or reporter has received. Has he (Paul) seen videos of Ghanaians lamenting over how people without Npp party card are being treated at the food distribution centers?

When did Paul Adom-Otchere become an admirer of Chairman Rawlings and the wife? Was it not same Paul who recently spearheaded the anti-Rawlings crusade on his platform? Was it not same Paul who twisted facts about the Revolution on his platform just incite the post-revolution generation against Mr Rawlings? Today hailing Rawlings on his platform because he wants to get at his daughter. It shows the kind of character we dealing with- very dishonest, arrogant, and selfish. His deceptive practices and nefarious deals have damaged his once-respected platform.

When did Paul start admiring appointees of the various NDC governments? What he did was practical display of hypocrisy, yellow journalism and dishonesty. His own media house has been showing some of these unacceptable practices by officials of Nadmo and the Gender Ministry. Ghanaweb is not a credible source of information? Is that what Paul wants us to accept or believe? What he did today on his show was childish, primitive and journalistically unacceptable. He must apologise to Dr Zanetor, her constituents and the Parliament of Ghana.

I don't expect a Metro TV journalist to be ignorant of the fact that government's food for the poor is being shared on party lines. His behaviour and conduct on his platform did not reflect the kind of behaviour and research that we expect of journalists before sitting on a Metro TV platform. This is a character clearly singing for his supper. His conduct was outlandish and outrageous. He is a gangster, not a journalist. His approach and conduct were unprofessional and unjournalistic. He has an enviable record of spewing lies on his programme.