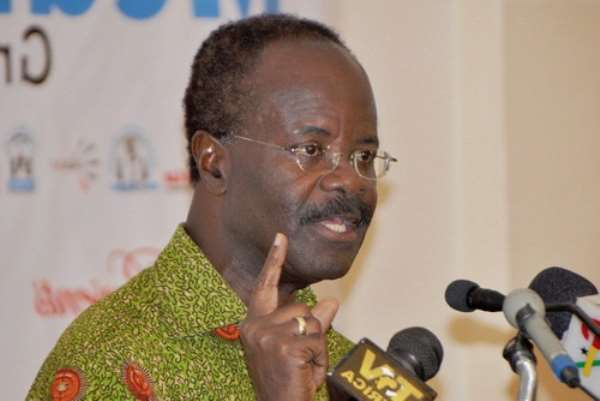 Lawyers for Dr Papa Kwesi Nduom have told an Accra High Court that the Ministry of Finance maliciously lied to the Bank of Ghana that the Government only owes Groupe Nduom only GH¢ 30.33 million.

“The evidence, as shown by the turn of events narrated in the previous sections of this address, suggests strongly that the patent misrepresentation by BoG (that the total value of the Interim Payment Certificates was a meagre GH¢ 30.33 million only) was not innocent or, even, negligent”, the lawyers argued.

A written address signed by counsel for the applicant, Justice Srem-Sai submitted that both the Minister of Finance and the Governor of the BoG, knew very well that the government owes Groupe Ndoum far in excess of GH¢ 629,091,335.00.

According to counsel, a few days before the revocation of the applicants’ licence, the BoG wrote a letter in which they asked Groupe Nduom to assign up to GHC 170 million of the government’s debt it. The letter was attached to the address as Exhibit PKN 9.

Written address
In a 39-paged written address in support of the originating motion on notice for various orders for the enforcement of the fundamental human rights of the applicants, counsel argued that all evidence pointed to the fact that GN Savings was, as at the time of BoG’s decision, truly solvent; and BoG did not take into account all the relevant factors before concluding that GN Savings was insolvent.

“In this regard, the applicants contend that not only did BoG fail to take into account all GN Savings’ assets before concluding on its solvency, but also that there was a malicious design by the respondents between and among themselves to supress the value of GN assets so as to enable them to come to the pre-determined conclusion that GN Savings was insolvent,” counsel submitted.

What follows from here, therefore, is a summary of some of the key factors that BoG and the Minister of Finance should have taken (but have, either by neglect or refusal, failed to take) into account before coming to a decision on GN Savings’ solvency.

According to the applicants, independent assessment of their books showed they were solvent adding that “all this notwithstanding, BoG, which has not conducted any known independent, fair or truthful assessment or evaluation of the GN Savings’ books – assets and liabilities – was able, quite bizarrely, to come to a conclusion that GN Savings was insolvent and, consequently, revoked GN Savings’ licence on August 16, 2019.”

“The Applicants’ argument, therefore, is that BoG has failed to conduct a true, fair and independent assessment of GN Savings’ books – matching the value of its total assets against the value of its total liabilities. And, indeed, if BoG had conducted a proper, true, fair and independent audit into the books of GN Savings, it would have known or come to the obvious conclusion that GN Savings was solvent and, therefore, capable of meeting its debt obligations as at the time that BoG revoked its operational licence,” the address pointed out.

Counsel further submitted that by revoking the licence of GN Savings and going ahead to appoint a Receiver to liquidate or wind it up without complying with the tenets of administrative justice, and failing to take into account matters of fact which had been acknowledged by the BoG and the Minister of Finance themselves in correspondence captured on the record, the respondents have, are or are likely to deprive the applicants their right to the property in the GN Savings.

According to the applicants, the BoG’s conclusion that GN Savings was insolvent has no basis at law or in fact. “Rather, we have demonstrated that the decision was, at best, reckless, fraught with stark malice and in self-evident violation of basic public law rules. We have showed in the affidavit and the exhibits attached (refer to the schedule below) that GN Savings was not only solvent, but also that it has assets far more than its total liabilities,” counsel added.

Citing authorities to buttress its argument, counsel is accordingly praying the court to grant its reliefs because the applicants had amply demonstrated the respondents, who were mandated by law to ensure businesses thrived; acted unfairly and capriciously leading to the loss of 2,840 jobs.

Background
It may be recalled that the BoG revoked the licence of GN Savings and Loans on August 16, 2019, with the reason that the savings and loans company was insolvent.

The BoG and the Attorney-General are, however, yet to file a defence.

Rather, the applicants argue they have kept exploring one legal technicality after the other, thereby, causing the trial judge to finally order them to file their final address by April 13, 2020.