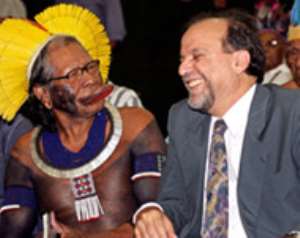 It was billed as the most important conference about indigenous peoples in Brazilian history but may have fallen short of its stated goals.

For the first time since its inception the Brazilian government indigenous agency, Funai, toured the villages of the 400,000 surviving indigenous Indians to listen to their demands - which included setting up an indigenous parliament, receiving royalties for looking after "the biggest biodiversity in the world", the Amazon, and compensation for destroyed ancestral lands.

Both groups refused to send representatives saying they did not "recognise the legitimacy of the conference to put forward indigenous politics".

There is a long history of mistrust and polemic between Funai and indigenous groups, particularly over land rights and mining in indigenous territories, which currently account for 12% of Brazil as a whole.

One proposal, from the Cinta Larga, Apurina, Makurap and other tribes from the south-west Amazonian region, had asked for a guarantee that 50% of available position within Funai should be filled by the Indians themselves.

The conference, which spanned hundreds of dwindling languages and cultures, wrapped up on April 20 with an agenda to create a special working party to "study, debate and propose mechanisms for the social inclusion and the right to citizenship for indigenous peoples".

The body will have a term of 249 days to complete its work.

The final document of the conference deferred the proposal for a ministry for indigenous people arguing that "that it is not the moment to create another structure which can't count on the necessary support to function."

Nevertheless, Megaron Txucarramae, leader of the Kayapo Indians, felt the conference was a success, but said that there was still "a lot of land to identify and demarcate.

"There are many languages so we had to adopt the style of the 'whites'. But the people met together and the next conference will be easier, for sure."

Last year, Txucarramae had called for the resignation of Funai's president over land appropriation differences. But this was brushed aside this year, showing a warming of relations between indigenous tribes and the government.

The conference also agreed to include the "history and social reality of indigenous peoples" in Brazil's national school curriculum and to pay for environmental damage.

Indigenous groups have been growing in influence and political onus since the Rio de Janiero Earth Summit in 1992.

With elections looming in Brazil, many indigenous groups want to create their own political party saying their voices are rarely heard.

Momentum is growing after neighbouring Bolivia saw the first indigenous leader in the history of the Americas, Evo Morales, was elected to lead the country in January.

In March, Luiz Inacio Lula da Silva, the Brazilian president, created the National Commission of Indigenous Politics, a body charged with setting up April's unprecedented conference and to follow and support the process.

It has elected 30 members – 18 from indigenous groups, 10 from the federal government and two from non-governmental organisations.

"The commission will signify the union of the indigenous with the Brazilian state," claims the president of Funai, Mercio Pereira Gomes.

According to the World Bank, 10% of the population of the Americas are indigenous. But in Brazil, which makes up almost half of Latin America in terms of territory and peoples, only 0.4% of indigenous peoples have survived.

According to the non-governmental organisation, Survival International, there were around five million indigenous when the Europeans arrived in 1550, now there are only 400,000 left comprising 225 tribes.

After the "slow genocide" many groups are near to extinction. A third of Brazil's tribes number less than 200 people each.

The largest tribe - the Kaiowa-Guarani - once numbered 1.5 million but now there are only 30,000 remaining. They have been plagued by young suicides - in one village on the Brazilian-Paraguayan border they have suffered from one of the worst suicide rates in the world.

The indigenous Indians say that this is because they are forced to subsist on a tiny patch of land which has broken down their traditional way of living.