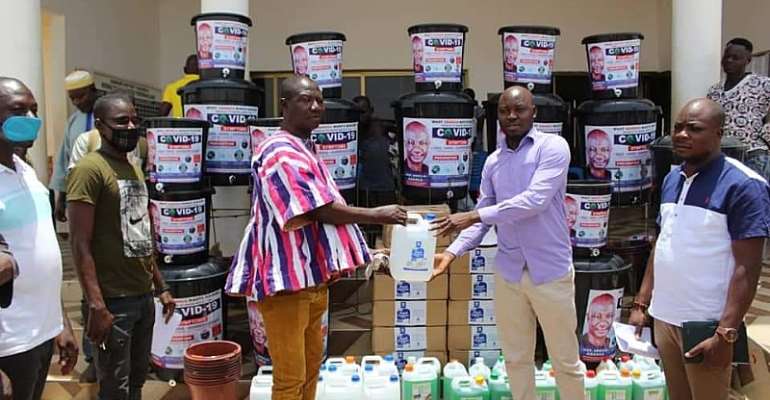 The opposition National Democratic Congress NDC in the Binduri district of the upper east region has accused the District Chief Executive, Ayinga Abagre Yakubu of diverting items meant for the district to fight the covid-19 pandemic.

The items which were received from the Ministry of Local Government and Rural Development (MLGRD), the NDC alleged that the DCE not only diverted the items but embossed the image the New Patriotic Party Parliamentary candidate in Binduri constituency.

The items were procured with taxes for the Binduri District Public Health Emergency Management Committee but were presented as though, the NPP parliamentary candidate procured the items solely.

At a press conference in Binduri, the National Democratic Congress Constituency Secretary, Imoro Mahama alleged that the items being donated to the district don't belong him (Abdulai Abanga the parliamentary candidate) but rather from the taxpayers.

Below is their full address"

Ladies and gentlemen of the media, good morning and thank you for honouring our invitation despite the short notice for this brief but very important press conference.

It is an urgent one which is to protect and safeguard the lives of the good people of Binduri so far as the world’s pandemic; COVID-19 is concerned.

Friends from the media, you will recall that since the outbreak of COVID-19 in December 2019, all countries across the world have been battling this very deadly disease and Ghana is no exception. It is in the light of this that the president of the Republic of Ghana H.E Nana Addo Dankwa Akufo Addo through executive powers rolled out a number of measures however poor and reactive they maybe, which included closing down of schools, ban on religious activities as well as public gatherings such as funerals, night clubs, beaches and many others. These were followed by a partial lockdown of Accra, Kasoa, Tema and Kumasi all aimed at bringing COVID-19 under control.

More importantly, it is also worth mentioning that the president through his finance minister has also gone in for a loan of One Hundred Million Dollars ($100m) from the International Monetary Fund (IMF) to acquire logistics, PPEs, human resource capacity building among many others. This loan will be paid by all of us tax payers. The president has also called for a united front and de-politicization of COVID-19 right from the presidency to the MMDAs.

Surprisingly ladies and gentlemen of the media, the conduct of the District Chief Executive (DCE) for Binduri; Hon. Ayinga Abagre Yakubu and the ruling NPP’s parliamentary candidate in the constituency is blatantly to the contrary. We have found out from reliable sources and have evidence that the DCE for Binduri District Hon. Ayinga Abagre Yakubu decided to divert portions of our fair share of the district COVID-19 logistics from the Ministry of Local Government and Rural Development (MLGRD) to Hon. Abdulai Abanga; the parliamentary candidate for NPP in Binduri constituency to emboss his posters on these items procured through the taxes of the ordinary Ghanaian and presented to the Binduri District Public Health Emergency Management Committee as if the NPP parliamentary candidate procured these items from his personal or party resources.

Ladies and gentlemen of the media, it is shocking to know that all the above listed items donated in the name of PC Abanga Abdulai does not belong to him, and he never contributed a penny towards the procurement of the said items. I know you people are outraged too, regrettably, that is the truth for you to battle with. You can contact him to produce the various invoices covering the items. I bet you, you will either be presented with fake invoices or none at all will be made available for your perusal. So far, they have in reaction to the leak of the news circulated a fake invoice covering 10 200ml sanitizers, their own donation and publication says 480 200ml hand sanitizers. Things are simply not adding up.

The NDC in Binduri constituency finds this development disheartening, illegal, immoral, disrespectful to the rule of law, criminal and above all a blatant disregard of the executive authority of the President of the Republic of Ghana whose directive these two inconsiderate gentlemen of the NPP disregarded.

We find the action of the DCE as one that smacks of disrespect and an outright violation of the president’s directives. We will like the DCE and PC of NPP to note that, COVID-19 has no political colours and is a no respecter of persons. Therefore using resources from central government to score cheap political advantage will not wash.

Again, we are by this statement calling on the DCE to as a matter of urgency tell the good people of Binduri how many items he has received so far from the central government, how it has been distributed including quantities for verification purposes. The people also deserve to know how many PPEs are yet to be distributed. Any cash remaining must be made public as well. We are aware of his shoddy deals and daylight corruption; we are aware of the properties he has acquired within this short period while he has been a DCE; we want him to know that we are closely watching his moves and will in the coming days expose his corrupt nature.

We will also like to bring to the notice of the president of the republic, H. E. Nana Addo Dankwa Akuffo Addo that ever since Hon. Ayinga Abagre Yakubu was nominated and subsequently confirmed by the Assembly members in May, 2017, he has been running the assembly in his own interest as if the District Assembly is his personal property. We base this claim on the following reasons:

He succeeded in changing three different District Coordinating Directors for only God knows why and what the crime of these directors maybe within two years in office. It is sad to also note that the Binduri District Assembly has not had a substantive presiding member since the Hon. DCE assumed office due to his divide and rule tactics.

He refused to stay in the official residence of the DCE. He stays in his personal residence which he only managed to reconstruct after becoming a DCE and still draws rent allowance from the district assembly further depleting the scarce resources of the assembly. It is sad to note that, the residence meant to accommodate the DCE is now a habitat for animals.

Ladies and gentlemen of the media, it is also sad to note that the Hon. Ayinga Abagre Yakubu used a district assembly Navara pickup meant for Rural Enterprise Development to carry stones, water and sand for the construction of his private residence at Nayoko No: 2. The DCE ignored several calls from the sub sector committee to stop using the said pick up for others purposes except for its official use. The said pickup is broken down and packed at the district assembly.

He totally disregarded H.E the president’s directive to all his appointees not to use government resources to enhance their education. The DCE uses his official vehicle to attend lectures at Valley View University on weekends of which the vehicle is fuelled by the assembly. He has on two occasions driving himself got involved in accidents with assembly’s official vehicle registration number GT. 8469-19.

Our friends from the media we want to find out from the DCE the source of the money that was used in repairing the damaged vehicle. Your guess is as good as ours; the assembly’s limited resources. Is this what this poor assembly resource should be used for?

He refused to cooperate with the MP for the area in his quest to help develop the constituency. He was recently heard shouting at the top of his voice in a meeting with assembly members that he will never work hand in hand with the MP. Evidence of which we can prove on demand. We want the DCE to note that political difference should not deprive the poor constituents of development.

We are of the firm conviction that it is this his stance that has resulted in his refusal to approve the following projects proposed by the MP. Please note that these are just a few of his excesses and crass display of arrogance and ignorance;

Construction of pavilion to be used as classroom in Gotesaliga D/A Primary School.

Purchase of hospital equipment for the new maternity block at the Binduri Health Centre.

Financial assistance to tertiary students in the constituency.

Construction of boreholes in several communities within the constituency which are in dire need of portable drinking water.

Request to procure logistics to support COVID-19 fight in the Binduri district.

Distribution of logistics from central government were done by NPP party executives and communicators at the blind side of assembly members. This conduct is totally against the norm and practice of the assembly.

He refused to work with Mr. Godwin Abindabs who was appointed NADMO coordinator for the Binduri district. It is sad to note that this young man had no option than to sit home in expectation of the next miracle.

Interestingly, this is the same man (Hon. Ayinga Abagre Yakubu) who has borrowed seventy thousand Ghana cedis (70, 000.00) from the MPs share of the common fund has since refused to pay back for about a year now depriving constituents of the needed development from the Hon. Mp.

Ladies and gentlemen of the press, the dubious and despicable attempts by Hon. Abdulai to gain political advantage not through hard work but through such bizarre and dishonest manoeuvring with the connivance of a clearly clueless and vindictive DCE must be exposed. We submit that, this gross disregard and wanton diversion of state resources for personal political gain is criminal by law. We call on the special prosecutor as a matter of urgency to commence investigations into such conduct of abuse of power and the use of public office for private gain by Hon. Ayinga

We again submit that, Hon. Abanga Abdulai also stands liable for abetment of crime in this unholy act and must be made to answer for such criminal negligence and connivance.

Our friends from the media, in conclusion, we are serving the DCE a stern warning that we have had enough of his excesses, ignorance and arrogance. We are left with no option but to match him boot for boot. Several options are on our table. He should in his own interest put a stop to his needless shenanigans before things get out of hand. He must be minded that, the wheels of justice grinds slowly but his days of reckoning are numbered.

Thank you all for coming, may God bless you; bless our dear Binduri district and our dear nation Ghana. Remember to observe the basic health protocols of hand washing with soap under clean running water, use hand sanitizers as much as you may need them, avoid handshakes and stay home. Stop the spread, spread calm and not fear.

More NDC News
ModernGhana Links
Election 2024; NDC needs a fresh candidate to claw back power - Dela Coffie
Calling on gov't to complete your projects is an endorsement of NPP's 'break the 8' agenda for 2024 — Stephen Atubiga to NDC
Withdraw fraudulent suspension of Salaga South Constituency Executives immediately — Concerned NDC Supporters
‘Give us our harbour or resign for being unfaithful, untruthful’ – Cape Coast NDC tells Akufo-Addo
“Even those who lost elections are thanking people, what are their problems with me inspecting projects?” – Akufo-Addo jabs NDC
We appalled by machiavellian tactics to get MCE nominees confirmed — Western North NDC
2020 polls: We could've also gone on promise spree like NPP – NDC
Tell your family and friends choking the payroll to forfeit their juicy jobs and go into entrepreneurship — NDC’s Basintale
NPP no match for NDC, we'll win 2024 elections hands down – Ofosu-Ampofo
TOP STORIES