Coronavirus: Cheating in the Midst of Need. How Religions Have Failed us. 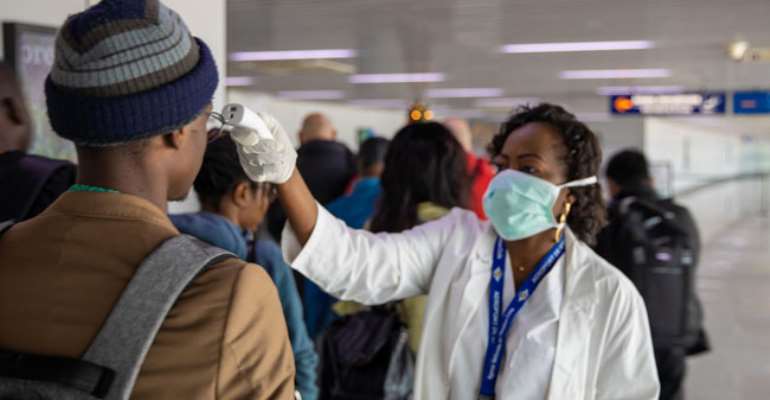 When it was officially confirmed that we had some imported coronavirus cases on our hand, things have never been the same in most parts of Ghana, especially in most major cities.

Some few days before the official confirmation of coronavirus cases on our land, I bought a 50 millilitres hand sanitizer for my daughter at ¢3.00. A few days when COVID-19 was announced and the President of the Republic of Ghana announced the first measures in combating COVID-19, prices of sanitizers shot through the roof. The 50mls of alcohol-based sanitizers sold at ¢3.00 all sudden jumped to ¢6.00 and some cases ¢10.00.

In a story that appeared on www.independeng.co.uk and written by Lizzy Buchan said among others that the Prime Minister of the United Kingdom "Boris Johnson has said the government could bring in new laws to crack down on profiteering to prevent unscrupulous traders cashing in on the coronavirus outbreak.

The prime minister said MPs may have to look at legislation to ban people from ramping up prices amid reports of sky-high price tags on vital goods such a toilet roll, hand sanitizer and baby milk".

This shows that people of all races have the tendency of taking advantage of others in times of need. We all know and agree that when demand outstrips supply, prices would automatically soar. Traders would want to cash in and make unscrupulous profits not taking into consideration the plight of the ordinary citizen.

The UK is a regulated economy and the words of the PM Johnson would carry weight and possibly be adhered to.

In a related story written by Cristina Krilpahl titled "Price hikes in Africa aggravate the coronavirus crisis". In this story it is reported that "prices for basic food staples are rising in Africa, as shoppers stock on essentials and sellers seek profits amid the coronavirus scare. Across the continent, people are calling for governments to intervene" .

In Kigali, Jean Marie Mutsinzi often shops at the Kimironko market, among the largest of Rwanda's capital. He said he was caught by surprise by the rapid rise of prices. "The food I was buying last week at RWF1500 [US$2, €1.80] increased by more than RWF1000 and this is a problem for the people, " he told DW (m.dw.com).

The story continued that, the Kenya authorities have relied on appeals to traders to curb speculation. The Health Cabinet Secretary Mutahi Kagwe said that "this is not the time to make abnormal profits." The Competition Authority of Kenya has also warned traders against piling up goods, threatening them with some penalties. But the Kenyan government has set no limits on food prices (Krilpahl, 2020).

Back to my country Ghana, when rumors started going round that a Lockdown was possible, prices of items escalated to astronomical proportions and this is where my beef lies. The government did not announce any price ceiling for essential commodities neither did it announce any form of punishment for offenders but, rather the Minister for Food and Agriculture, Dr Owusu Afriyie Akoto, has advised against panic buying in the wake of the partial lockdown announced in parts of the country. The lockdown forms part of measures by the government to contain the spread of the coronavirus, which has so far claimed five lives in the country.

Dr. Owusu Afriyie Akoto went on to state, “I’m prepared to bet that in the next week or two, prices of goods will come back to normal… There’s more than enough food in the system. They don’t need to rush to stock up because this is not a war situation. We’re talking about just two weeks and with a possible extension of the movement depending on whether we’re successful with what we want to do, in two weeks, it’ll come to normal. So, it is a very odd period of interruption. There’s no need to stock up".

From the forgoing, my question is where is religion in all this matter? And, how has religion moulded our character? Have these foreign religions helped us at all?

From the above data, 88.8% of our population are Christians and Muslims. So, which people are hiking the prices of essential commodities in our markets? If others are stocking up because of fear of coronavirus, should they be cheated like this?

I agree that we all work or engage in business to make profits, but reasonable profits is the watch word. Why would majority of Christians and Muslims behave this way? Why would we sell essential goods like hand sanitizers, food and others at such exorbitant prices when we all know that, "these are not normal times" to quote the president?

This depicts as a bunch or very corrupt people who are quick to blame politicians for being corrupt. The Church and the Mosque has failed us. What moral and or ethical principles have religion be instilling in us all these years we have been attending churches and mosques? Something needs to be done differently.

When I was young, I was taught by my parents to abdicate my seat in a vehicle should I see an older person standing in same vehicle. I was told to assist the elderly carry their luggage, anytime I come across such scenes. What is the situation today with the preponderance of churches and mosque in every nook and cranny of our country?

We allowed foreign religion to denigrate our culture and custom to extent that, anything from our culture is seen as antiquated and fetish. Is this what the so-called Christian and Islamic religion can teach us?

I've been told that the prices of gari, tomatoes, plantains, onions and other foodstuffs have gone up than the norm. Abnormal times like these, is when I expect to see the exemplary leadership and the show of love from the religious leaders and their adherents and not the other way round.

Some churches, individuals and private citizens have sent some donations to government to help fight COVID-19. A mention of some of them is in the right direction. The Church of Pentecost has donated, personal protective equipment worth over GH¢45,000 to aid in the country’s fight against COVID-19.

According to the Church, the PPEs are to be distributed to all frontline health personnel in the country. Some of the items donated includes; face shields goggles, nose masks, N95 respirators, hand sanitizers among others.

The Church Of Pentecost notwithstanding the items donated, also released 10 cinema vans to the National Commission for Civic Education (NCCE) to intensify education on COVID-19 public across the country.

The Deputy Minister of Health, Alexander Kodwo Kom Abban, on behalf of government took delivery of those vans on Tuesday, March 24, 2020, after the signing of a Memorandum of Understanding (MoU) between the church and the NCCE. The vans are fitted with public address system (modernghana, 2020).

In a related story, the Presbyterian Church of Ghana (PCG) through the leadership of its Moderator of the General Assembly, Rt Rev. Prof. Joseph Obiri Yeboah has decided to provide food for frontline health workers working in connection with the COVID-19 pandemic at the Greater Accra Regional Hospital, Tema General Hospital and the Ga East Municipal Hospital.

The story continued that, PCG is to provide lunch every day for 300 medical staff working at the three designated health centres managing COVID-19 cases in the country for the next seven days (www.graphic.com, 2020). Still on the church, the founder of Anointed Palace Chapel, Rev. Francis Antwi, popularly known as Rev. Obofour and some members of the church and Cash TV Foundation have donated GH¢100,000.00 to the Tema General Hospital. The hospital also received tissue, gloves, sanitizers, Veronica buckets, beds, among other items worth over GH¢50,000.00 to help in the fight against COVID-19.

The above gestures are good because the church must help the state and do more in times of need but the behaviour of most Ghanaians in relation to how essential items were sold and are still being sold depicts that, there is a disconnection.

I think that the teachings from most pulpits across the country over the years hasn't impacted well on us nor made any significant change in our moral fibre. What would it profits us if we cheat our fellow men who are in need and go and pay heavy tithes or offerings to the church? There is something absolutely wrong with religion and its impact on us especially Christianity.

In conclusion, I know and must admit that, we trade to make profit but not to profiteer at the expense of the citizenry in times of need. That isn't Godly and frowns upon the basic tenets of Christianity and Islam. So who are the cheats in our midst?

In a conversation with a friend of mine who is a parliamentary aspirant recently, he said he wanted to buy hand sanitizers to help some of his constituents but one is being sold to him at ¢10.00 and assuming he is able to procure 500 pieces. Assuming it was sold to him at ¢3.00 per one per that same size, then it means he would have been able to procure over 1,500 pieces to assist a lot more people.

This is what religion has failed to teach us. In our socio-cultural setting, our communal spirit was good and held society together. With the advent of foreign religion (Christianity and Islam) such communal spirit is dying off and being replaced with individualism, greed, selfishness and corruption.

Coronavirus has come with a lot of hardship and difficulties including financial hardships on citizens and countries across the globe but has also exposed a lot of lapses within our governance structure and other aspects of our life.

It has exposed us as a very greedy, selfish and unreligious people who lack fellow feeling for one another. According to statistics, majority of us are very religious (Christians and Muslims) but in my humble view, such religions haven't helped us to imbibe proper moral and ethical values to help one another.

All those who cheated others who wanted essential items are either Christians or Muslims and that depicts the defects in the teaching of these religions or those teachings haven't impacted positively on us. If not so then, pastors and Imams haven't help us to develop a sense of fellow feeling and love for one another.

We can still belong to our religious persuasions of our choice but must revert to some of our socio-cultural ethos such as communalism and being each others keeper.

Coronavirus has exposed us all badly and the earlier we sit up the better for us.