What African scholars think of studying in Denmark 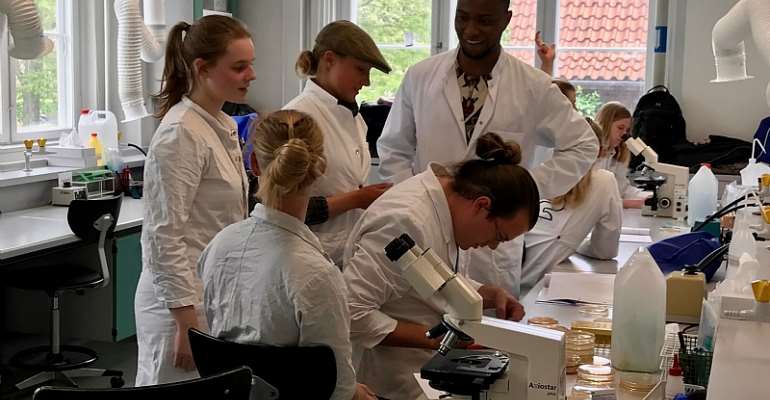 Dr Gildas Hounmanou with his colleagues at the University of Copenhagen. Hounmanou, from Benin, studied in Denmark. - Source: Danida Fellowship Centre/Vibeke Quaade

During the 1990s, the World Bank and other major aid organisations focused on primary and secondary rather than higher education in Africa. The Scandinavian countries had another strategy. They made partnerships and so-called research capacity building programmes at higher education level with African countries.

Over the past three decades, more than 500 African scholars have been to Denmark as part of such partnerships funded by Danish Development Assistance (Danida). The partnerships take different forms, but their main objective has been to contribute to the solution of developing countries' problems, both in terms of new research results and in building research capacity.

In 2018, Danida Fellowship Centre initiated a study of the experiences and reflections of the African scholars who'd taken part in such partnerships.

The scholars reflected on their experiences, and listed both benefits and drawbacks of studying in Denmark. These included access to supervision and having the opportunity to share and discuss knowledge in their research groups, as well as being able to access libraries, laboratories, and other facilities that may have been lacking in their home countries.

The majority of those we interviewed were still involved in research and were publishing at international level. Those not working in the research environment said they continued to apply their training in critical thinking and knowledge sharing. Almost all of the researchers were active in local development in their home countries. Some were active in politics at home or internationally.

Overall, the study's findings suggest it is vital for African researchers to have access to international funding, for example through Danida's research capacity building programmes. This benefits individual scholars, Denmark and Danish universities – and, crucially, the countries from which these researchers come. Their experiences can be used to build research capacity on the African continent.

The study targeted all the approximately 500 African scholars who had been involved between 1989 and 2019. We managed to get in touch with 60% through a questionnaire, which asked about respondents' current employment, research collaboration, publications and mobility. There were also open-ended questions regarding their ideas about the benefits and challenges of being involved in research capacity building.

Most respondents were originally from Tanzania and Ghana; around 65% were currently employed in the university sector.

We also had 15 qualitative interviews with current and former PhDs, and researchers involved in current research capacity building projects. Finally, we conducted a workshop with 45 participants that posed broader questions about the purpose of going to Denmark and notions of empowerment.

Most of the people we interviewed hadn't particularly wished to come to Denmark. They were keen to go wherever funding was available. But they all had very positive feelings about the country – apart from the Danish weather – after having been there. Some participants shared their experiences in Denmark in video interviews.

The current PhD fellows were making the most of their stays in both Denmark and in their home countries. They said the most important advantage of studying in Denmark was supervision and having the opportunity to share and discuss knowledge in research groups. Conducting fieldwork and being supervised were the most important aspects of their stays in their home countries (which formed part of the fellowship).

Less than 5% marked the item “disappointed” on a list of 11 items (multiple entries allowed) describing their PhD training. Some elaborated by noting the difficulties of leaving family behind.

Many of those who had already completed their PhD studies said they remained in contact with their supervisors and other people in Denmark.

The vast majority of the African researchers we interviewed considered their stay to have been intellectually stimulating, adding to their personal development and empowerment. Participants said their home countries had benefited, too.

They emphasised that they appreciated being able to discuss and share knowledge with their Danish colleagues, and the relatively high level of social equality and flat social hierarchies in Denmark. They had learned critical thinking and to work independently. This shows the importance of physical mobility – of actually being in Denmark.

And what of the benefits to the researchers' own countries, and the African continent more broadly?

The researchers educated through the projects were useful to their countries, although it is not possible to link this directly to the capacity building. The majority were employed either at universities or in the public sector; some of those working in the public sector were still conducting research. Only 1% were unemployed. Others were no longer involved in research, but had important positions in society due to their academic and intellectual skills.

We also questioned issues of power in the engagement between Denmark and the African countries involved. Any kind of so-called research capacity building is invariably embedded in power relations and debates about colonisation of knowledge.

We were quite surprised by the African participants' positive perception of research capacity building. We have both worked in the field as practitioners and researchers for quite a few years and have followed the debate about the decolonisation of universities. As we have also written about the power and politics of knowledge , we were prepared for critique. We asked for it and about it. But it seldom came across.