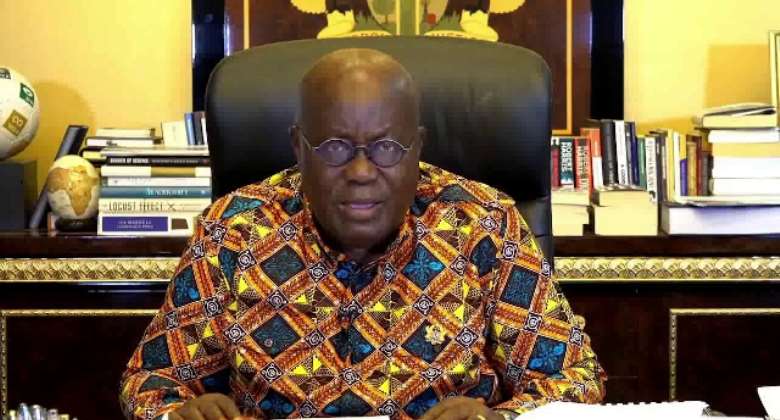 Fellow Ghanaians, President Akufo Addo's grossly skewed order to disassemble groupings of all forms in the country, makes me appreciate the local philosophical saying of our elders that, “a warmonger who shouts to his people: "we shall fight to the last man!", he's actually the last man behind his people.”

The latest careless brandishing of political highhandedness by government in respect of the embargo placed on gatherings of all kind excluding the Ghana Card Registration Exercise by the National Identification Authority, NIA, has really exposed the government's pursuit of its narrow agenda. It is a demonstration of zero regard for Ghanaians’ safety as far as the deadly coronavirus outbreak is concerned.

On March 15, 2020, President Akufo Addo, like a deputy God, announced the closure of all borders, discouraged the arrival of immigrants and banned all forms of gatherings including worship in Africa in the country. However, the government iNn silent approval has shot itself in the foot, and broken its own record of hypocrisy, infamy, and outright insensitivity to the life of Ghanaians by endorsing the activities of the NIA registration exercise to continue.

What a bundle of hypocrisy?
As every levelheaded citizen is aware, if there is any gathering currently in the country which has the tendency of spreading the deadly virus of corona and must be banned by any responsible leadership, it is the Ghana Card mass registration exercise and its kind. People are literally packed like sardines in queues to get registered. Only God knows the number of people who would be infested if an infected sneezes in the queue.

Personally, I slept twice at two registration centers and couldn't register it in Kumasi. Finally, I was considered and favored to register because I was identified as a Teaching Assistant in the Religious Studies Department at KNUST.

True is, people start queueing before 10pm and they remain in the queues till the next morning for the NIA officials to arrive and begin work at around 7am. And the reality is that, those who could not do it in their various regions for some reasons when it got to their turn, now migrate to the region the exercise is presently taking place.

Consequently, it is not only aborigines of a particular region who are patronizing the registration process. Unregistered Ghanaians from other regions the exercise already took place, take advantage to register as well. This is because, there's a notion in the general air, that Ghanaians who couldn't register within the stipulated timeframe of government, have to pay money in order to register later if they don’t register now.

Ghanaians who think they may not be able to mobilize the needed resources to register later due to the octopus of economic hardship the Akufo-led government has brought on Ghanaians, go to other regions to get themselves registered to escape the rumored penalty that awaits them.

Therefore, it's a fact that not only the people of the Eastern Region who are currently engaged in the registration process, other unregistered Ghanaians from all over the country, are trooping into the Region to get registered. In which case, the purpose of the ban on movements has been defeated.

The implication is that, the virus could be carried internally into that Eastern Region from infected persons of other Regions.

Apart from that, the headless monster of horror and danger with the continuation of the exercise is this. It's an open secret that foreign nationals usually are sponsored into the country by political parties in Ghana to vote for them. The Ghana Card mainly going to be the basis for a person to be registered as a Ghanaian voter means, political parties would have to wave the magic wand at all cost to get foreigners registered as many as possible. Although the exercise is to purposely curb this phenomenon, if you understand Ghanaian politics you would appreciate why that mafia-style of registering foreigners cannot be avoided.

Why then is government is embarking upon the exercise?

For me, I think government having realized the agitation of the disgruntled Ghanaian voters for their abysmal management of their affairs, it's employing all tactics and strategies to "loot" the election.

May Allah forbid such a move!
Be that as it may, if foreigners are going to be part of the registration exercise which is more certain than the Devil's place in hell, Ghana risks a rapid contraction and spread of the corona virus.

The government knows this. The president knows it. His ministers are aware of that, and the masses who are queueing up to get registered know the full implication of allowing the exercise to go on. But that's what the practice of blind and ethnocentric politics can do to us. Lives must be compromised for someone to rule forever.

Let President Akufo Addo remember that "the battle is still the Lord's". And that, in our local philosophy, no human being has ever governed forever on the throne of time.

Sooner rather than later, the throne would become a thorn and torn.

Just as former President Mahama could not maintain and retain the power by any foul means he could lay his hand on when he needed it the most, President Akufo Addo and his ATM and "food-for-cronies" government, shall kiss goodbye to the Flag Staff House.