During This Time of Crisis, is the Black American Truly African ? 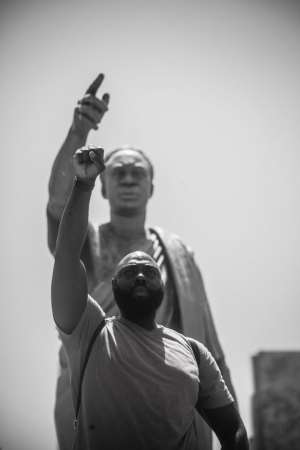 Just 3 months after the conclusion of the Year of Return festivities, who would have thought on the 15th of March, 2020 Ghana President Nana Akufo-Addo would announce that at-least temporarily, no one could return.

I arrived in Ghana the 27th of February as part of a promotional trip for my entertainment company. My Ghana itinerary consisted of 6th March events, Accra Fashion week, the Kwawu Festival, networking events, meetings with Ghanaian influencers, and the nurturing of previously established relationships.

As various African countries started confirming cases of COVID-19 in their country, I noticed a common theme. The confirmed cases were predominantly of foreigners entering the country from China, the Middle East and Europe. Those of African descent who contracted the virus were few and those people were mostly reported to have been in close contact with travelers from the aforementioned regions. My own prejudices and bias started to show. I began to blatantly avoid all non-Africans in Ghana. I would look in disdain at all tourist who were not of African descent as potential carriers of the virus. I would look at them spreading Corona germs all over clothes, jewelry and any items they would touch from hawkers and in stores. I thought I was fine, it was a non african sickness and all non African’s should just go home and stop spreading their germs getting us sick here. Then one day something happened that I will never forget.

I was at a restaurant I frequently visit and I heard two of the workers having a discussion. The two were speaking in Twi. In the middle of the conversation I heard “Corona virus, twi twi twi, Americans, no Black Americans too”, then one of the workers glanced at me with a worried looked, then quickly looked away. Right there I knew things would change. For the very first time, besides being charge a higher fees for items and services, this was the first time I knew as a Black American, I was a foreigner too. As public awareness spread about the virus and Nana Akufo-Addo made his historic announcement regarding the travel ban, I began to notice changes in the way I was being perceived and reacted to as a Black American in Ghana.

Places I would frequently visit such as the stores inside Shell and Bonjour filling stations would not only serve me from a distance as health regulations would require, but they would actually serve me in what seemed fear. People who would speak to me regularly in town would barely make eye contact with me. Street hawkers wouldn’t offer to sell me items as regularly and more often than not, they would look at me then go over to their colleague to make attention to my presence and never approach me.

It didn’t take long for me to realize I am stereotyped as a carrier of the virus and I make most people uncomfortable with my presence. Including my previous stop in Ivory Cost I been on the continent almost a full month, I have no symptoms of COVID-19 but just because I’m from America I’m feared. and rightfully so. People from the northern hemisphere are bringing Corona onto the continent and if it spreads an outbreak could happened. I have been told tha many people believe Ghana wouldn’t be able to control an outbreak of the virus. My personal beliefs is that warmer climates are not at risk for a Corona outbreak but I am not a doctor, biologist or chemist. I’m just a traveler, social influencer who chooses this think for himself.

I have been battling my own stereotypes against Africans as well during this trying time. In America we are fed stereotypes about Africa all the time. One is that we are led to believe that when there is civil unrest in Africa. People from African countries mercilessly kill each other. Thoughts of Rwanda genocide, and Xenophobia from South Africa and Zimbabwe constantly run through my mind. When will talk and looks of fear towards me become harsh words and physical violence! What if Ghana becomes overtaken with COVID-19? Am I a causality of civil unrest waiting to happen? Wait, no, not Ghana? Ghana, Ghana? Right of Adobe Ghana? Dual citizenship Ghana? Year of Return Ghana? Beyond the Return Ghana? Let me relax, Africa is 54 countries with different traditions, cultures, spiritual beliefs, languages etc. not just one huge country that reacts to everything the same.

Thank you to the Ghanaians who still come visit me, watch movies and eat with me. They laugh and say they know I been here long enough and I’m not sick so it’s fine. But what about people who don’t know me, don’t know how long I been here, and don’t know my health status? I don’t think people are wrong for fearing me, I just hope that I can stay long enough for things to calm down and I can enjoy my favorite country again. If I was bored and restless in America before the outbreak, imagine how miserable I will be if I returned home under marshal law.

Oh my how the tables have turned. Africa has now banned Europe, Asia and America from their boarders in fear of disease and sicknesses. You have Americans such as myself in Africa not wanting to return home because of the current state of affairs. As a pro-black activists, this is the day my ancestors dreamed of. Africa is the place of preference and America, Europe, and Asia is where mass hysteria, sickness and chaos reigns. But now that this time has come, are we the Black American really welcomed home? Not my American dollars or my U.S passport being welcomed, but me? Rashad McCrorey, the descendant of those sold off into slavery 401 years ago? Am I welcomed as I am already in Ghana while the world is in crisis? I guess temporarily for the next 4 weeks or until further notice, the answer is still to be determined.

Rashad McCrorey is an American Entrepreneur and Writer. Rashad specializes in Entrepreneurship, Human Rights for individuals of the African Diaspora, Self Care, & Self Empowerment. ​To Learn more about Rashad and planning a trip to Africa visit www.ghcrossculture.com , www.egyptcrosscultur