MH17 trial opens in The Netherlands 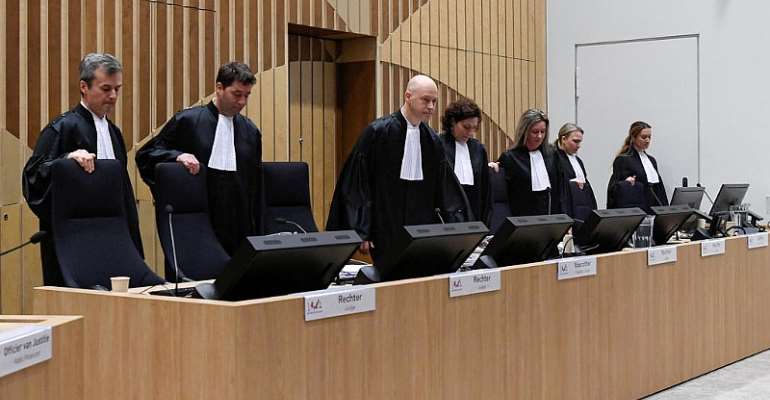 Four men accused of murder over the downing of Malaysia Airlines Flight 17 over Ukraine in 2014 have gone on trial in The Netherlands. Russia says it was not responsible for the deaths of all 298 people on board, but blames Ukrainian forces.

The suspects, three Russians and a Ukrainian, were not present in court but judges ruled that the hearing could continue in their absence.

Before the start of the trial, a prosecutor read out the names of each of the men, women and children who died when the Boeing 777 was shot down by a Russian-made Buk-missile over Ukraine while flying from Amsterdam to Kuala Lumpur.

Head judge Hendrik Steenhuis declared the trial open at the court near Schiphol Airport where the flight took off, deploring the "tragic loss of human lives from all around the world".

Prosecutors say all four were linked to pro-Russian separatists on whose territory the plane's wreckage fell near the start of Ukraine's bitter civil war.

They argue the men were instrumental in bringing the Buk-missile system to Ukraine from its original base in Russia, even if they did not pull the trigger.

Moscow again on Friday accused The Netherlands of a "crude attempt to put pressure on the court" while pro-Russian media try to discredit the investigation. Tass news agency cited a report by a platform of independent journalists, Bonanza Media, claiming that the Dutch prosecutor knowingly considered "breaching Russia's sovereignty" by approaching witnesses.

Ukrainian forces
Sputnik, another pro-Kremlin publication, quotes Moscow as saying that the missile that shot down MH17 “belonged to Ukrainian forces”, but it deplores that “evidence provided by Russia was never taken into consideration by Dutch investigators”.

"In the last days before the hearings, everything was done to fill in the gaps in evidence presented and to camouflage the falsification of the facts of this version in advance," Russian foreign ministry spokeswoman Maria Zakharova said.

But Dutch Prime Minister Mark Rutte said the trial was being held in "full independence" and was a "very important step to get to the truth and to find justice for the victims and their relatives".

More than two-thirds of the 298 victims were Dutch.

Full confidence
US Secretary of State Mike Pompeo lent his support on the eve of the trial, saying he had "full confidence" in the Dutch justice system and those responsible "must be held accountable".

Dubinsky, 57, who has also been tied to Russian intelligence, allegedly served as the separatists' military intelligence chief while Pulatov, 53, was an ex-Russian special forces soldier and one of Dubinsky's deputies.

If found guilty, the four suspects could be handed life sentences.