Which One Is Easier To Say, Akufo Addo Is Corrupt Or A Thief? 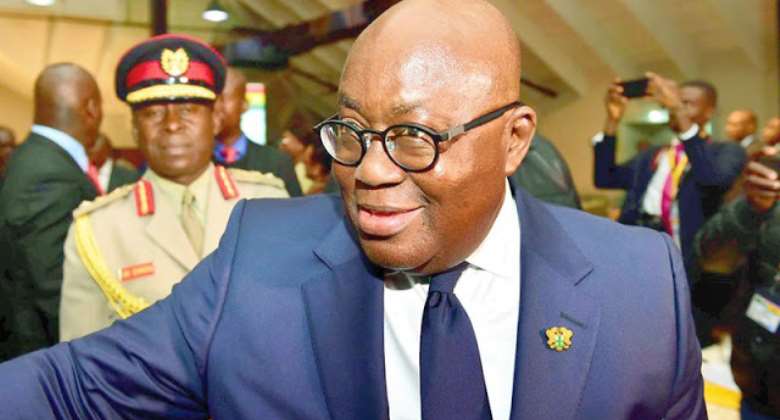 Corruption at the moment has ruined the economy of Ghana but the fact is Akufo Addo like other Ghanaian politicians is also corrupt. I have written many articles openly revealing all Akufo Addo corruptible deals, including the printing of the new 100 and 200 high currency notes and the missing excavators.

I am, therefore not surprised, the Member of Parliament for Sagnarigu Constituency in the Northern region, A.B.A Fuseini, asking Akufo-Addo to render a detailed account of his administration’s fight against illegal mining to Ghanaians.

Akufo Addo wants Ghanaians not only to understand but to believe that only the NDC or John Mahama, the ex-Ghanaian leader is the most corrupt in Ghana's political history but for anyone who will believe this is indeed living in Ghana but actually doesn't know what is happening in the country or simply a hypocrite.

However, I don’t blame Akufo Addo; I blame Ghanaians and want to know why they persist in believing this man who has made Ghana the third corrupt country in the world and yet not free from the pocket of Nyantakyi, the former president of Ghana Football Association.

Nyantakyi became a scapegoat to suffer disgrace alone with his family but like me, I know that other Ghanaians know that Akufo was involved in the football corruption scandal.

Politicians in democratic governments continue to distort the truth, denying involvement in questionable affairs or minimizing the harmful consequences of their decisions, yet what surprises me today is the ability of voters to support these leaders who seem to be openly savoring their lies.

Four hundred tricycles belonging to the Northern Development Authority (NDA) have been stolen and over 500 seized excavators from illegal miners also couldn’t be traced, yet those crimes weren’t issues of concern to the Ghanaian, leader.

However, Akufo Addo has appointed the Special Prosecutor, Martin Amidu to investigate the Airbus corruption scandal because of opposition leader, John Mahama. This is the kind of disgraceful and embarrassing politics going on in Ghana.

Ghana is a strongly religious country but at the moment, there is more shame in the country. Part of the population continues to support the lies and the criminal activities of Akufo Addo but often forget that they will harvest the products of the bad seeds he is sewing. Politicians don't suffer, always it's the vulnerable people.

Those living outside Ghana or overseas, praising the bad Ghanaian government are pure hypocrites with a full belly. If they live in Ghana, wake up each morning with the suffering Ghanaians, eat the same food with them, when sick can’t go to the hospital because of money, they will stop that nonsense overseas.

Some of the labourers, including cleaners and handymen in Belgium, have their own houses or rented beautiful apartments, cars, with at least 1,500 Euros every month. That’s the way every common Ghanaian must live.

Belgium doesn’t even have one-tenth of the resources Ghana has but the fact is that the country’s 15 Ministers, plus the Prime Minister, are not stupid like the Akufo Addo’s elephant-sized Ministers. They know how to create jobs and maintain a flexible economy.

Which one is easier to say, Akufo Addo is corrupt or a thief? As for me, both are easy to say because the Ghanaian leader is not a Messiah. The entire government of Akufo doesn't only lacks intelligence, they are all filthy corrupt.

According to Mr. Kofi Akpaloo, the founder of one of the new political parties in Ghana – Liberal Party of Ghana: “No Reasonable Ghanaian Will Vote For Mahama Again,” Mr. Akpaloo, please, let me tell, don’t join the dirty pigs for someone to mistakenly consider you as dirty or one who lacks intelligence.

The fact which many Ghanaians due to hate or ignorance wouldn't like to admit is nobody will ever vote for Akufo Addo again for abandoning projects which belong to Ghana because they were started by the opposition in any Eastern bloc country, including Romania, the poorest, let alone Western Europe.

Mr. Akpaloo, it seems you don’t actually see the error and stupidity behind this political blunder by Akufo Addo because Ghana, like all African countries, considers everything that glitters gold, that's the reason those that lack intelligence will vote for Akufo Addo.

Despite all the rich resources, Africans are never considered as human beings by the developed world because we never proved our intelligence significantly in anything we do or say.

To your information, the political scene in Ghana is a disgrace and embarrassing because the current government has built the country on the foundation of hate, jealousy, and nepotism, which will grow for those Ghanaians that lack the intelligence in the country to reap its bitter fruits. Time will tell.

I am very glad that Akufo Addo has been in some European countries, including Norway, recently. I don't think he went there as a spectator or a tourist, just to watch things in those countries and also don't think the Norwegian leader, Erna Solberg, told him that she abandoned projects which were left uncompleted by the opposition party.

He must learn something significant from his trip to improve the poor condition of the suffering Ghanaians. Indeed, Akufo Addo is a disgrace to Ghana.