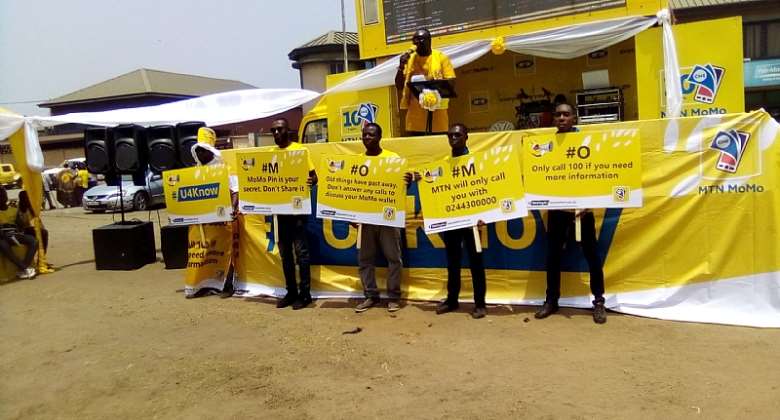 An event has been held to officially launch the MTN ‘MoMo U4Know’ fraud education Project to help users safeguard their MTN MoMo wallets from fraudsters.

The event which took place on 27th February, 2020 at the forecourt of Domod Roofing Limited, Agbogbloshie, Accra brought together some community key stakeholders such as chiefs, religious leaders among others who were expected to carry the message to their communities so as to conscientize them at various platforms.

Eli Hini, General Manager, Mobile Financial Services (MFS) indicated that they will continue to improve and enhance the platform with the state of the art security features so that together with their customers they can work and grow the space and eliminate the incidence of fraud.

According to him, they will be taking the campaign to the local level to sensitise customers at the lorry parks, churches, mosques, homes and community centres to interact with them on the issue.

Eric Yeboah ­– Asiamah, Manager, Mobile Money Implementation, South East (Greater Accra, Eastern and Volta Regions) in his submission noted that in as much as MoMo is becoming a household name by providing convenience, fraudsters are taking advantage and defrauding customers.

He said as a way of addressing the issue, they decided to launch the ‘MoMo U4Know’ project by way of engaging all the stakeholders involved through customised education at the local level to get people aware of the various tricks that fraudsters use and how they can protect themselves.

The venue for the launch was chosen because MTN had been at that community several times and registered over thousands of the ‘Kayayeis’ (head porters), market women, the chiefs and the rest who are mostly on MTN MoMo.

As they are perceived to be the most vulnerable and not well informed and become the target of fraudsters, the project sought to use targeted education in their local languages with specific examples and drama to make them well aware of the various tricks used by fraudsters in order to protect themselves.

The ‘MoMo U4Know’ has been coined into four basic rules where the first ‘M’ indicates that ‘MoMo PIN Code is your secret which should not be shared.’

The ‘O’ means ‘Old things have passed away, do not answer any call to discuss your MoMo wallet.’