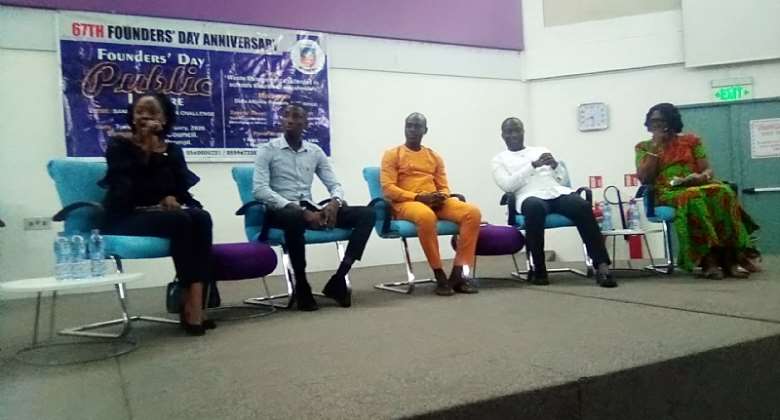 A Public Lecture has been held by Keta Senior High Technical School to commemorate it 67th Founders’ Day anniversary.

The event which was held on February 25, 2020, at the British Council, Accra, was organized under the auspices of the Board and Management of Keta Senior High Technical School through the Past Students Association and had the topic: “Waste Management challenges in schools: The Role of Stakeholders.”

The theme for the event was ‘Sanitation: A Major Challenge of Our Time.’

Sanitation as a topic was chosen due to the fact that it bothers on discipline and also a major national issue.

One major way of working as Ghanaians to address the challenge is to educate the future leaders who are the students in the various schools.

Asiwome Agbenyega, Chairman of the Board of Governors and President of the Past Students Association of the school, underscored the need to train future leaders to know about sanitation issues. "It will go a long way to help our country because they are going to be the ones to steer the affairs of the country in the nearby future."

The Chairperson of the occasion, Mrs. Bridget Katsriku in her speech indicated that waste management is the responsibility of all and should be a collective effort involving different stakeholders who are the general public, researchers, educational institutions, government and regulatory bodies, the private sector, Non – Governmental Organizations (NGOs) and the media.

The Mayor of Accra, Mohammed Adjei Sowah during his submission noted that Accra which is densely populated has a major sanitation problem.

He noted that the Assembly is making efforts in addressing the situation through diverse ways like placing bins at vantage points to keep the city clean.

The Special Guest Speaker, Makafui Awuku, Mckingtorch Africa said there is need for all to be very responsible with the waste disposal. "We generate and also provide information to the Ministry of Sanitation in terms of those abusing the bins placed within the city for them to face the appropriate authorities to serve as a deterrent to others."

Isaac Kofi Dzidzienyo, Headmaster of the school noted that the issue of waste management is attitudinal which should be addressed right from homes and teachers too must lead the campaign of insisting that students separate waste and dispose of appropriately.

A former student of the school who is studying at the University of Ghana Medical School, Cyril Xedidor admonished that "we all have to instill the culture of proper waste management in ourselves to achieve a clean environment in our society going forward."