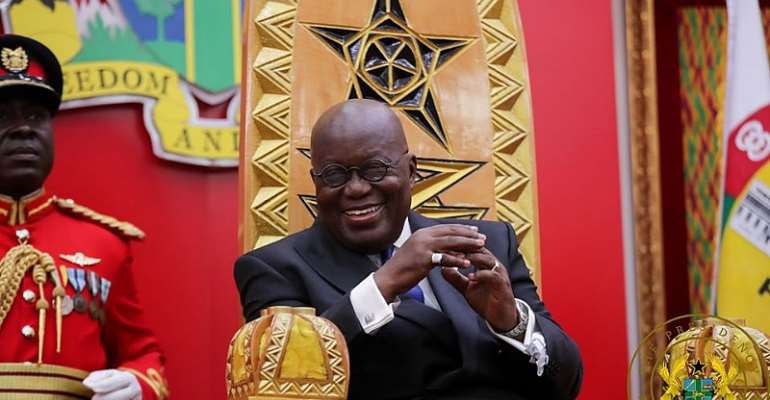 Fellow Ghanaians, when I saw some uncomplimentary comments commented on social media by a section of the Ghanaian populace, chastising the Minority in Parliament House for their staging of a walkout on the arrival of the President in Parliament just before the commencement of the State of the Nation Address, I remember the lamentation of a Syrian Arab reformer, Mohammed Rashid Rida: The Syrian said that, "to revolt on behalf of an ignorant people, is like to set yourself ablaze in order to light the way for a blind man"!

Those Ghanaians who took the Minority to the cleaners may not have been ignorant, but the breathtaking level of Stockholm syndrome that has gripped this section of Ghanaians is what does the miracle. Despite the obvious thieving leadership, many Ghanaians still bow down to the now “Executhief” arm of government.

President Akufo Addo and his New Patriotic Party's unfortunate declaration of war on prudence and truth, their betrayal of wise counsel from the Minority, have brewed this ceremonial acrimony and brawl. It was not a calculated attempt to disgrace an already embarrassed President Akufo Addo since his inception as some Ghanaians want to believe.

Indeed, had it been in other climes, it would have been a civil responsibility for the entire august House not to listen to the President's predicted cocktail of lies and cacophony of propaganda.

But because the 1992 Constitution of the Republic gives the President the mandate to remote-control some Members of Parliament (MPs) through his appointment of many of MPs as Ministers of State, such “stomach legislators” and incentives grabbers could not disobey their paymaster but had to remain seated. Shame!

You see, the continuous deployment of unintelligent lies by the NPP government, has, in the last three years, made the President of the Republic unpopular and a mockery in the sight of the Minority in Parliament.

For three years, President Akufo Addo has consistently exuded immaturity of leadership by reducing the Presidency and its powers to a factory and manufacturer of falsehood and propaganda and a retaliatory entity, where every imaginary foe of his is hankered after in a most callous of ways.

Where in the world does a colossal damage such as what is going on with the trade fair demolition exercise by the government, is done? What at all is the government going to achieve that is worth the demolition and destruction which is being done to the owners of the companies and shops? And even if there's something worthwhile to accomplish with such level of soulless destruction of others' properties, didn't our elders bequeathed to us a conventional wisdom that says one must not destroy old cloths because of new ones? What form of stupidity is this?

We have an imposter government (NPP government) that has become too obsessed with propaganda and blinded by arrogance of power that, it hardly distinguishes between State's functions and that of the NPP's. Neither President Akufo Addo nor Vice President Bawumia knows when to be a statesman and when to be on political campaign platform. The latter has been running in their veins always. Every opportunity to speak to the citizenry is uselessly used to score cheap political points against political opponents. Yet, the Nation's "watchman" which is supposed to oversight this anomaly, has been partly and badly silenced by ministerial gifts. Consequently, the President always takes the undue advantage to campaign even in occasions of statesmanship such as State of the nation's address (SONA). And we think Minority should not walk out of such a "camouflaged" NPP's grand campaign platform?

Come on! Ghanaians can do better.
It's high time discerning Ghanaians realize the irredeemable disaster and damage President Akufo Addo and his largest government is causing to this country. Ghanaians must appreciate why their "responsible Representatives" in the House of legislature must not, in the least, pay attention to what the President claims to have done over the last three years against the wise counsel of the Minority MPs (responsible Representatives).

Just imagine. Imagine someone you have hired and paid GH¢30 to buy you a new pair of sandals excluding the amount you hired him with. This person goes to the market and decides to dishonestly borrow GH¢1000.00 on your behalf to buy the same sandals. Meanwhile, you hired another person to monitor and advise against imprudence. The "buyer" refuses to listen to the advisor's advice and they both contacted to inform you about the change of trends as far as the buying of your sandals is concerned to which you keep mute.

Fellow Ghanaians, what do you think the "counselor" should do if they arrive at home? Stay to say what or do what? Help account to you about a fraudulent transaction?

The Minority stormed out of Parliament in anger due to the level of impunity and dishonesty proudly displayed by the Akufo Addo-led government in the last three years. How can the President don't listen to the Minority and wants the Minority to listen to him?

How can the President borrow almost GH¢3500 on behalf of each Ghanaian, old or young, rich or poor, parent or ward, to pay for a Senior High School that was hitherto cost less than GH¢700 in public schools against the good advice of the Minority, and yet, he expects the Minority to listen to his account? "Did we go or did we come?"

Culminating what the President said in his State of nation's address (SONA), in my quiet mode of observation, one thing I figured out was the fact that, President Akufo Addo has come to the end of his stay in the Flag Staff House. The entire speech was simply saying goodbye to Ghanaians.

I don't entirely blame those who failed to understand the president was in essence, saying goodbye to us. Because, farewell speeches delivered even by religious leaders like Jesus Christ (Peace Be Upon Him, pbuh) and Prophet Muhammad (pbuh), were never easily and readily comprehended. Even reformers like Dr. Martin Luther King Jr had their farewell messages grossly uncomprehended let alone a President who leads a people majority of whom are governed by their emotions than their intellect.

Having enumerated what he had borrowed money to accomplish, it was very clear that the President was saying "as a result, I would not be able to continue with this leadership for another term. The wealth I envisioned Ghanaians sitting on in the buildup to the 2016 general elections, has since turned to a mirage and disappeared into thin air."

President Akufo Addo's State of the nation's address (SONA) depicted an unqualified apology to the people of Ghana because he promised to fight corruption which backfired him big time.

His Excellency told Ghanaians in his SONA that the previous government was better considering how recklessly he ballooned the size of government to 123 ministers from 85 ministers, and over one thousand "presidential staffers" in the Flag Staff House, a Guinness world record ever set. "Ayikoo" to the President.

President Akufo Addo told Ghanaians in his SONA that, of two evils, one goes for the lesser one as the saying goes and as a result, Ghanaians must go back for the NDC government that is a lesser evil, comparing the NPP's insensitivity showcased in the management of the public debt when it skyrocketed by an amount of over 100 billion cedis in three years. Recall President Mahama borrowed 40 billion and all hell came crumbling down to earth.

Therefore, come December 7 this year, let's do the needful and bring back a government that is sensitive to the real growth of this country.