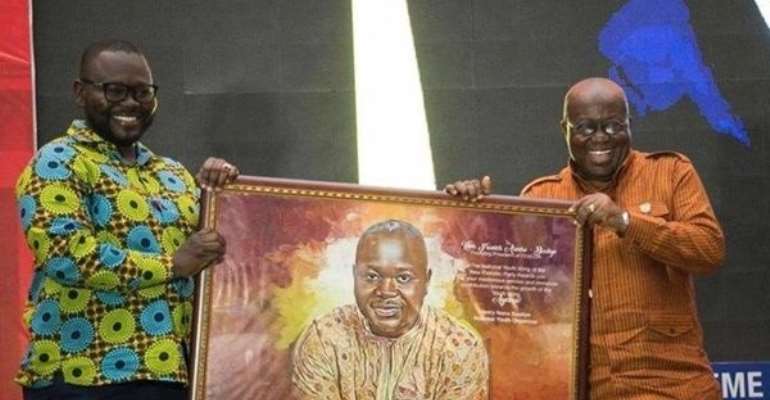 President Akufo-Addo has commended his deputy Chief of Staff and Political Assistant, Francis Asenso-Boakye, for his contribution to the formation of the Tertiary Students' Confederacy of the NPP (TESCON) and to the development of the NPP.

He was speaking at a durbar organized by the National Youth Wing of the NPP to commemorate 20 years of TESCON’s inauguration, under the theme, “20 YEARS OF COMMITMENT WITHOUT INDUCEMENT: TESCON OUR GENERATIONAL PILLAR”, which took place at Ho in the Volta region, on the 18th of February, 2020.

President Akufo-Addo said, “I have the force also to mention the name of my deputy Chief of Staff and Political Assistant, Francis Asenso-Boakye, the Founding President of TESCON who has proved to be invaluable to me in my work and is desirous of joining his colleagues in parliament. This is the nature of my umbilical link to TESCON which cannot be cut.”

“In the year 2000 when TESCON was inaugurated, he took the lead in mobilizing the youth of our party and of our country to make the historic change of 2000. For the first time in Ghanaian history, an opposition party, the New Patriotic Party, under the outstanding leadership of John Agyekum Kufuor came to office through the ballot box.

That event gave a great boost to the consolidation of the principles of democratic accountability in our body politic”, President Akufo-Addo concluded.

Prior to the 2000 general elections, the NPP had lost the two previous elections (1992 and 1996) to Jerry John Rawlings' National Democratic Congress (NDC), amidst widespread controversy. Key among the reasons assigned to the two consecutive defeats were rigging on the part of the ruling NDC, arising from the NPP's inability to mobilize its sympathizers to serve as party agents at the various polling stations to monitor the polls.

The idea to form TESCON was, therefore, conceived at a meeting at the Kwame Nkrumah University of Science and Technology (KNUST) branch at the Republic Hall.

At that time, the NPP group on the various campuses were known as the NPP students' wing, a name that lacked the vitality and vigorousness, according to Francis Asenso-Boakye, that would make the group stand up to the challenge posed by the then vibrant TEIN of NDC.

TESCON, since its formation has contributed constructively to the political development of the country through active participation in the national political discourse and election monitoring.

The commemoration of TESCON at 20 years brought together representatives of all TESCON institutions, regional TESCON coordinators, regional youth organizers, national officers, as well as various dignitaries of the party.

The two-day program which commenced on the 17th February and ended on the 18th involved various activities including community campaigns, the procession of achievements across the principal streets of Ho and a health screening exercise. The final day was crowned with a durbar at the Ho Technical University where President Akufo-Addo was the Special Guest Speaker.