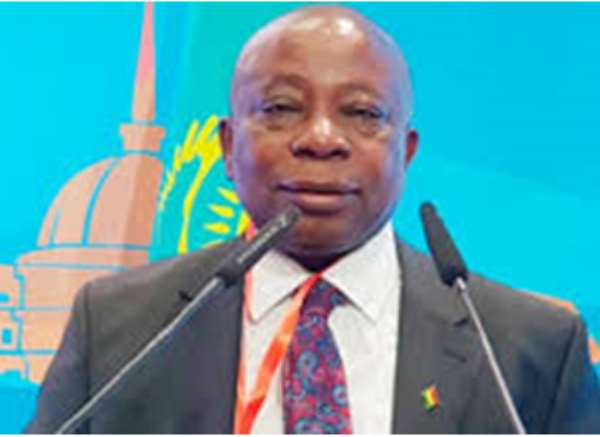 The world at large and China, in particular, is dealing with the deadly Coronavirus, which has claimed so many lives so far. The issue of whether or not Ghana is truly prepared to deal with such a deadly disease outbreak has been part of our national discourse over the weeks.

Various health experts have assured the public to be calm but to adhere to personal hygiene practices including but not limited to frequent handwashing practices as well as not coughing or sneezing anyhow in public. Whereas health education on such preventive measures is essential, the most important thing is for the country to prepare adequately to handle the curative aspects of such an outbreak to forestall many people dying.

We heard of how some health workers of the Korle-Bu Teaching Hospital panicked and were running helter-skelter who the hospital recorded two suspected cases, which were later not confirmed. We cannot blame these frontline workers of the KBTH. Perhaps they were aware of how unprepared their system was for such cases. After all, natural human behavior follows the guide that in the face of adversity or danger, there is irrepressible instinct to survive and human beings are likely to strive for survival.

Despite the fact that China is wealthier and far more developed than Ghana, the commitment with which they have handled the situation so far is commendable. Sometimes, you may not have enough money but your orientation or attitude to solving a problem may be equal to or better than that of a wealthier person.

So far, we have heard from the Ghanaian authorities that Tema General Hospital, Ridge Hospital and the newly established Ga East Municipal Hospital will serve as holding and treatment bays should we record cases. It is unclear whether or not these hospitals have been supplied with adequate number of Personal Protective Equipment (PPE). It appears that the Coronavirus is very expensive to treat in terms of the logistical supplies required. We must not leave things to chance. This is like death staring in our faces and we have to struggle for survival. We should not pay the usual lips service to the preparedness required.

So far, the country has only one laboratory facility, Noguchi Medical Research Institute, which has the capacity to test for the Coronavirus. What are we doing to strengthen the capacities of some of our teaching hospitals to be able to test for the virus at their laboratories? We know that Noguchi alone cannot take such a load from all over the country.

We have built the University of Ghana Medical Centre (UGMC) and called it a quaternary health facility and therefore it is higher in medical capacity than most of the teaching hospitals. Yet we had spent so many months fighting over whether or not the University of Ghana or the Ministry of Health is the owner of the facility. What is the role of the UGMC in our preparedness for the Coronavirus? It has been said that China even built a new hospital within six days for handling the outbreak. If the UGMC, a quaternary health facility is not made to lead the way in our preparedness for such an outbreak, then which other facility should be made to do so?

Knowing the kind of health system we run, all the major hospitals in the country should have been supplied with PPEs for now and the teaching hospital laboratories tooled to be able to test for the virus. We must act proactively as if the virus is already in Ghana.

Just last week, the managers of various health facilities across the nation, Association of Health Service Administrators, Ghana (AHSAG) made a press release relating to a number of healthcare issues. Regarding the PPEs, AHSAG stated inter alia, “Government must ensure that all frontline staff and Emergency Departments/Units at all levels of healthcare are provided with adequate PPEs and other logistics to enable them deal with the threat.”

The people of Mepe my hometown often say that one must not take it with a pinch of salt, if tilapia reports that crocodile’s mother is dead. This is because both tilapia and crocodile live in the same aquatic habitat. The members of AHSAG are the ones managing various health facilities in Ghana and per their press release, they are calling on government to supply PPEs. It means that AHSAG knows that there are no PPEs for now at the hospitals or even if they have stock, it is woefully inadequate. They are speaking the voice of the Mepe proverbial tilapia who says the mother of crocodile is dead so we must not take for granted, their press release.

AHSAG also advised that education should be intensified so that public awareness of the disease will facilitate early case detection and prompt intervention. In Ghana, we use private and commercial vehicles mostly to transport patients to and from health facilities. In the process, these drivers will infect more people should we record Coronavirus cases. Methinks we should commend AHSAG for the advice to government and we hope government takes it seriously and works with it for the good of the public.

Lack of the required health commodities in the face of a disease outbreak can overburden health professionals and lead to preventable deaths as well as nosocomial infections.

What we did when we had cholera outbreak in 2014 should not repeat itself. In 2014, the Public Relations Officer (PRO) of the Ministry of Health and other government officials announced to the nation that cholera treatment at the public hospitals was free. Meanwhile, government through the Ministry of Health only supplied the hospitals with intravenous (IV) fluids and other medications but even the cannulas needed to give the IV fluids to patients were not supplied. The public hospitals funded the cholera treatment largely from their Internally Generated Funds (IGFs) with the governmental promise that they would be refunded yet none of them received a refund from central government after the outbreak. At the same time, the National Health Insurance Authority (NHIA) also over delayed in reimbursing the public hospital insurance claims submitted.

One would think that during such outbreaks, funds would be used from the Contingency Fund to intervene appropriately and not only the meagre IGFs of the public hospitals. It is however commendable to read in the media that government had allocated GHC2.5 million to facilitate preparedness for any possible outbreak of the disease. Let me caution however that if we use the same 2014 cholera treatment approach in handling any Coronavirus cases, then my foreboding is that the disease will wipe off a whole generation or population.

While others are putting pragmatic measures humanly possible in place to deal with such a situation, Ghana is depending heavily on prayers or the finger of God largely.

God cannot come and equip UGMC for instance to enable us test for the virus as Noguchi does. AHSAG also advised in their press release that government should equally equip the infectious disease treatment centre at Tamale Teaching Hospital to cater adequately for the northern sector should Ghana record any Coronavirus cases. Not all the cases in an outbreak must be brought down south for attention.

The procurement of the PPEs must be taken seriously because the virus is so contagious that the treatment of only one patient leads to the use of so many PPEs that must be discarded after use. Coronavirus is a disease and not a political issue so we need to team-up in war against the disease, irrespective of our political affiliations. To designate only three holding and treatment bays and one testing laboratory for over 31 million population of Ghana is too small. We hope that the GHC2.5 million allocated for preparedness for the Coronavirus is used just for that purpose and nothing else.

Anyone who will speak against the National Cathedral will di...
23 minutes ago