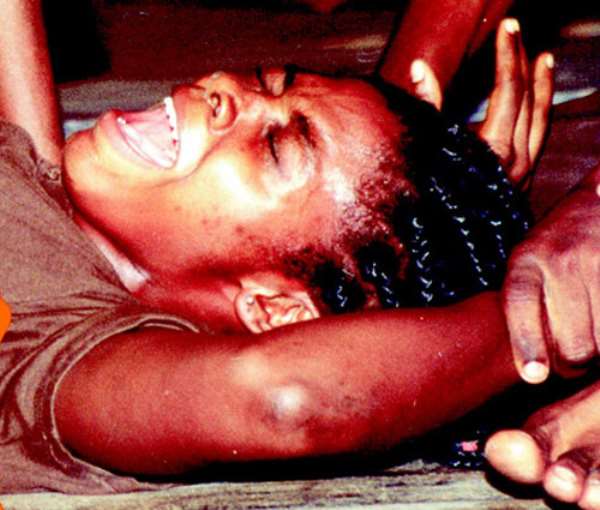 Female genital mutilation (FGM) involves the removal of part, or all, of the female genitalia. The most common form of genital mutilation performed in Ghana is known as the excision which include removal of all, or part of, the labia minora, and cutting of the labia majora to create raw surfaces, which are then stitched or held together in order to form a cover over the vagina when they heal. During this process, a small hole is left to allow urine and menstrual blood to flow. In some less conventional forms, less tissue is removed and a larger opening is left. Other forms, such as clitoridectomy and infibulation are also practiced.

According to International reports and research ,FGM is most prevalent in the regions of the Upper East, Upper West, North and parts of the Volta Region where more than 75% of girls have reportedly undergone excision. In the southern part of Ghana it is practiced among migrants from the northeastern and northwestern parts of Ghana, from Mali, Togo, Niger, Burkina Faso and other neighbouring countries.

Several attitudes and beliefs have been attributed to this practice. Generally, FGM in Ghana appears to be linked with traditional beliefs rather than religion. Some believe it leads to cleanliness and fidelity of the woman. Others believe it will increase fertility and prevent the death of first-born babies. It is also seen as a way to suppress a woman's sexual desires and make her less promiscuous.

In some communities, uncircumcised women are said to be less attractive and less desirable for marriage. Social or peer pressure is also cited as a primary reason why some undergo this procedure.

According to Dr Juliana Aryeh, the effects of genital mutilation can lead to death, as pain, shock, haemorrhage and damage to the organs surrounding the clitoris and labia can occur. She mentioned that urine might be retained and serious infection developed. Chronic urinary tract infections, stones in the bladder and urethra, kidney damage, reproductive tract infections resulting from obstructed menstrual flow, pelvic infections, infertility, excessive scar tissue and many others may also occur.

Use of the same instrument on several girls without sterilization and the lasting damage to the genital area can cause the spread of HIV.

On sexual intercourse, she told me it can be very painful, and said in some cases, cutting of the opening left after mutilation is necessary before intercourse can take place. We went further to look at the issue of childbirth, and she was quick to add that existing scar tissue on excised women may tear and those whose genitals have been tightly closed, have to be cut to allow delivery. After giving birth, these areas are stiched to make them "tight" for their husbands. The constant cutting and restitching of a women's genitals with each birth can result in tough scar tissue in the genital area.

Despite actions by government after passing of legislation in 1994, FGM is still being practised secretly in Ghana. The government in 1989 issued a formal declaration against FGM and other harmful traditional practices. Section 69A of the Criminal Code makes FGM a second degree felony punishable by a fine and imprisonment. Since its enactment in 1994 two practitioners have been convicted. In fact all levels of government have come out strongly against FGM.A lot of NGOs have also condemned it.

In my research into FGM, I managed to speak to a lady who went through this at the age of twelve, below is her story…

“I was about twelve years when I went through the painful ordeal of female circumcision.

After my usual breakfast, I accompanied my auntie to see her friend. At her house, I met other girls and other women who had also come to see my auntie's friend. We later got to know she is a "Wanzam". We entered a room and I was asked to sit on a stone.

My legs were widely spread out as I sat on the stone. Several women surrounded me with each holding me tight. I was given cola nuts to chew whilst they cut me. I felt the pain and screamed but they did not stop. I tried to free myself but they over-powered me.

Within some few minutes it was over, but I was still feeling the pains. In fact I really suffered, it was really difficult for me to urinate. I became sick for some time and fully recovered after several weeks of great pain.

I am now 26 years of age and not married, but in a relationship with an electrical engineer, who has promised to marry me soon.

But I don't really know what my sexual life in marriage would be like. I am still a virgin,” she concluded.

In fact, I was really sorry for her as she described her ordeal. I just said to my self, every Ghanaian must wake up and talk about FGM. She also told me there are people who are not aware of the law against FGM in Ghana especially in our villages. She called for a campaign to fight against FGM and suggested that our churches and other organisations in our remote communities be encouraged to talk loudly about it.

“We must save our young girls from this torture, I suffered and I am still suffering. That painful experience still lives with me”. She sobbed.

To this end I wish to encourage our government, NGOs and everyone to make this issue as important as the issue of politics, health and development. Let us save our young girls from this PAINFUL EXPERIENCE!