Akufo Addo, I Am Not Scared Of You Because You Can't Kill Me 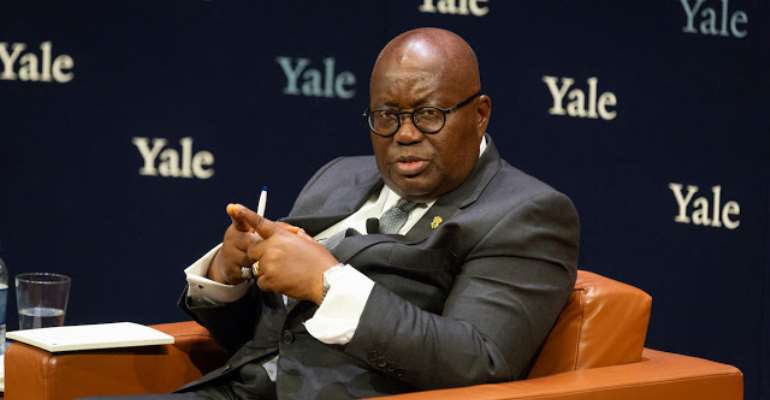 Angry, frustrated, and disappointed Ghanaians have already declared the former Ghanaian leader, John Mahama corrupt, the reason he lost the 2016 elections. Therefore, I don't have anything significant about Mahama to write. I am neutral and not affiliated with any political party in Ghana.

My articles are, therefore, based on the current Ghanaian leader, Nana Akufo Addo, who has won the heart of each Ghanaian that he is pure as snow and above all, the Messiah to save poor Ghanaians and get rid of corruption, while in fact, he is a thief among thieves.

If I am residing in Ghana, my articles wouldn't be different from what I am providing today on ModernGhana news. I am not scared of Akufo Akufo and I believe he knows too well about that. Akufo Addo can't bully, intimidate or kill me. He mustn't even think about it.

I am not hitting against Akufo Addo because I hate him but I want Ghanaians to understand that he is equally corrupt like John Mahama. Above all, in the past in Belgium, I have written similar articles against the Belgian government, its royal family and the police.

I am not like the empty barrel columnist who lives in America, making all that stupid noise, yet so scared to write an article about the US government's role in creating Aids and Ebola in Africa. We need to educate our children to let them know the truth and if you can't write such an article don't be jealous to attack someone who can.

It's clear why Akufo Addo is enjoying the fear which has fallen on Ghana because everyone fears to criticize his bad corrupt government but what he shouldn't forget is, he can enjoy the media silence but his corruption and bad governance are visible.

Free education means something significant since he has given every Ghanaian the opportunity to educate his or her child but he is a bad leader since he lacks the knowledge to create jobs and maintain a flexible sustaining economy.

Look at all the treasures in the country, plus the discovery of oil, yet he can't utilize the resources to create a better future for Ghanaians and the worst of all, his bad leadership has abandoned projects left by the former government. Which intelligent leader will do that?

Do you want me to praise you for doing this? Do you want me to lay the red carpet for you to pass on for abandoning projects which belong to Ghana but not for the NDC? Any intelligent person will never attack me for writing about this because this foolish act in any country will not take Akufo Addo to the next level.

You talk of getting rid of corruption but Ghana at the moment is the third corrupt country in the world. While countries around the globe are evacuating their nationals from coronavirus epidemic China, you have decided not to do that and you think this makes you a good leader?

In our country are foreign embassies of both developing and developed countries, the latter knows about your poor leadership, the fact that it is wrong to interfere in Ghanaian politics they are quiet but that doesn't mean they don't see what is going on in the country.

Akufo Addo, accept the fact you are a bad leader for abandoning projects which have cost Ghana millions of dollars just because they were started by the former government, NDC. Your actions are unprofessional, therefore, next time, Ghanaians mustn't be angry if Trump calls Africa a 'Shithole continent.'

Recently, I wrote an article entitled ' Akufo Addo Must Apologize To Ghanaians And Take Over Uncompleted NDC projects and also on February 2, 2020, submitted an article: A Humble Request From The Minister Of Information, Kojo Oppong Nkrumah, asking him to persuade the Ghanaian leader to take over the projects as soon as possible.

Ghanaians are known to be intelligent people but God only knows the reason they have failed to show that wisdom.

Abandoning educational and medical projects which belong to Ghana uncompleted because they were started by the opposition, NDC doesn't permit Akufo Addo to be in office for the second time.