...With The Launch Of Her Foundation 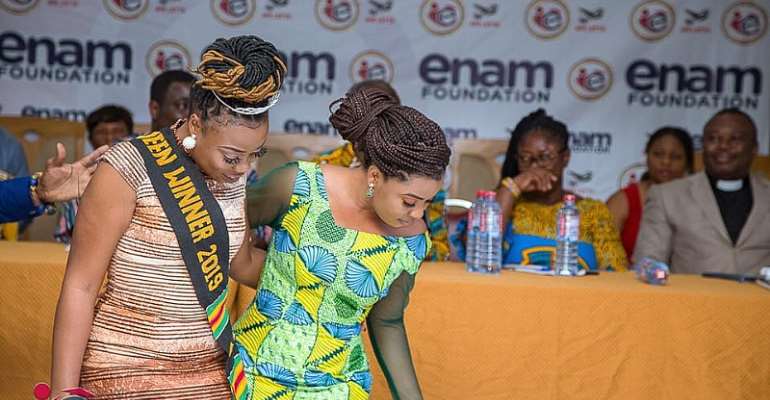 First Runner Up of the 2019 edition of TV3’s Ghana’s Most Beautiful reality show, Anita Enam Bossoh launched her foundation to help reduce the incidence of teenage pregnancy in Ghana.

The Enam Foundation which was launched at Stevens Hotel in Ho on Friday is to campaign against teenage pregnancy so as to promote sustainable development goals 3 and 4.

At the launch, Enam, the Volta regional representative of 2019 Ghana’s Most Beautiful pageant disclosed that she was saddened after seeing tabulated results of teenage pregnancy cases in the country.

She made a firm commitment to helping reduce the high rate of teenage pregnancy, especially in the Volta region.

Launching the Enam Foundation, the guest speaker, Prof. John Gyapong, Vice-Chancellor of the University of Health and Allied Sciences stated that the aims and goals of the foundation would be fulfilled.

In his lecture, he mentioned that the main causes of teenage pregnancy are irresponsible parents, lack of attention and affection from parents, bad company and Peer pressure, poverty, illiteracy, and ignorance.

According to Prof. Gyapong, teenage pregnancy was concentrated among those with less education, who are unemployed, unmarried and with inadequate antenatal care and obstetric risks for poor pregnancy outcomes.

He advised that the Foundation in addressing this social canker should increase the advocacy and awareness campaign using both modern and traditional means to reach out these vulnerable teenage girls.

The special guest of honour and chair person for the launch, Dr. Archibald Yao Letsa and Madam Dzifa Gomashie expressed their total support for the foundation.

Dzifa Gomashie in her speech officially announced an Essay Competition among students in the Volta Region as part of activities for the Enam Foundation.

The winner of the Teenage Pregnancy Essay competition would be awarded an Ipad which will be presented by Hon. Abla Dzifa Gomashie.

The manager of the Enam Foundation, Benedictus Kwoku Ameduma in his speech said the vision of the foundation is to impact the world.

“This is a dream that Enam dreamed 10 years ago. Enam is versatile and it was evident in her disposition at the 2019 Ghana Most Beautiful pageant. They were tasked at the reality show to look for a problem and find solutions. She chose teenage pregnancy because it was influenced by her own life story and the things she has been through. Her mother gave birth to her at the age of 15years and travelled outside the country when Enam was just 13years old. She went through tough times in life and that is what inspired her to use this noble platform to advocate and educate young girls and parents about the effects of teenage pregnancy.” He said.

Enam Foundation as part of its aims and objectives will use the education and awareness drive and collaborate with Health Directorates across the country (Ghana Health Service); and Ghana Education Service (GES) authority for more awareness campaigns at school and community levels.

Other dignitaries who graced the occasion were Ho Municipal Chief Executive, Prosper Pi-Bansah, a representative from the office of Former President Jerry John Rawlings, Traditional rulers and others.