Abraham Jawol To Contest The NPP Primaries In The Saboba Constituency 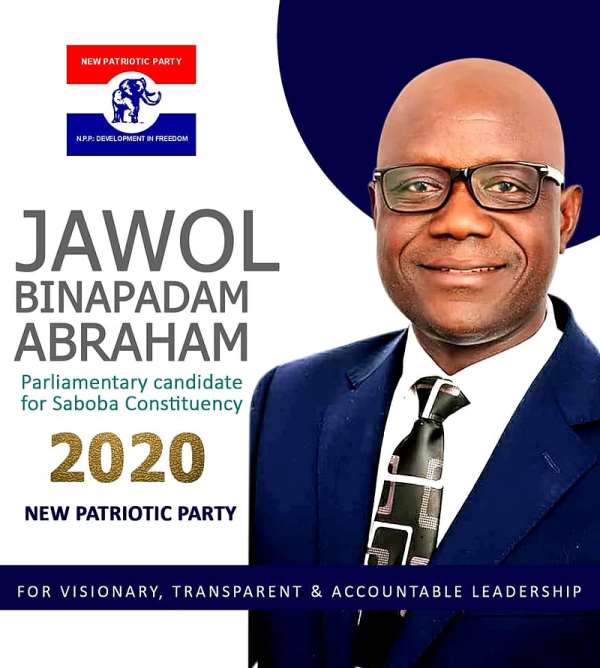 The Managing Director of Ghana Supply Company Mr. Abraham Jawol has declared his intention to contest the upcoming Parliamentary Primaries of the NPP in the Saboba constituency of the Northern Region.

According to Mr. Jawol, his teeming supporters from the rank and file of the Party have hinted that they would pick nominations forms on his behalf voluntarily at their own cost as a proof of their confidence in his bid.

Mr. Jawol has been in the Parliamentary race with the incumbent member of Parliament, Hon. Charles Bintin for three consecutive times.

His party activism, commitment, and dedication to work caught the attention of the President of the Republic, Nana Addo Dankwa Akuffo Addo, who appointed him as the Chief Executive Officer of Ghana Supply company to steer the affairs of the state-owned company in 2017.

Hon Jawol told the Voiceless Media that the strength of any politician is not in the position he occupies nor the wealth he may have accumulated but in the people who have vested their confidence in him and therefore, he was obliged not to abuse the trust of the people for any other consideration.

He also disclosed that he will unite the party in the constituency when elected as the Parliamentary Candidate in preparedness for a resounding NPP victory in December.

The Aspiring Parliamentary Candidate also spoke of his desire to bring peace and stability to the Saboba constituency and to be an MP for all.

The Aspiring Parliamentary Candidate promised to use his experience to help fix the many problems the Constituency was facing when given the nod to serve as MP.

He admonished his supporters to engage in a campaign devoid of insults, lies and character assassination but rather work hard to ensure his victory come 25th April 2020 and that of the Party in the general elections.

Hon Charles B. Bintin is the current Member of Parliament for the Saboba constituency and will be contesting the primaries as well.

The Voiceless Media will monitor events in the Saboba constituency and bring any developments to our readers.