MP For Ada Joins Accra Trotro To Her Ada Town 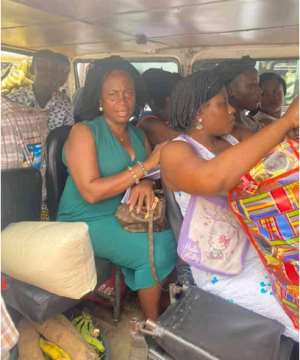 Madam Doyo Cudjoe, the MP for Ada was spotted in a trotro going to Ada. This example set by this woman did not only put her in their category but made her colleague passengers adore her.

Being on the trotro, madam Doyo won the heart of those people who voted for her. For those on the bus the MP has come down to their level.

She is a real human being who feels the cry of her people. Madam Doyo wanted to feel the struggles of those who voted for her. In fact, she subjected herself to the troubles that accompany being on a trotro car; the heat, the sweat, the delay, quarrels, and sometimes the harsh words from some conductors. But are others ready to do the same?

Elsewhere in the civilized world, government officials go to work using public transports. Who cares whether he is the PM and has to go in his on cars followed by numerous cars and yet they don't? This is in the developed world but down here in Ghana, a country whose budget is always staked by those developed countries, we see our leaders drive four cars at the same time. Gosh! Madam Doyo Cudjoe has finally sent a message to her colleagues, that they can also do the same to save Ghana from this adverse poverty. Long live madam Doyo Cudjoe, long live Ghana.