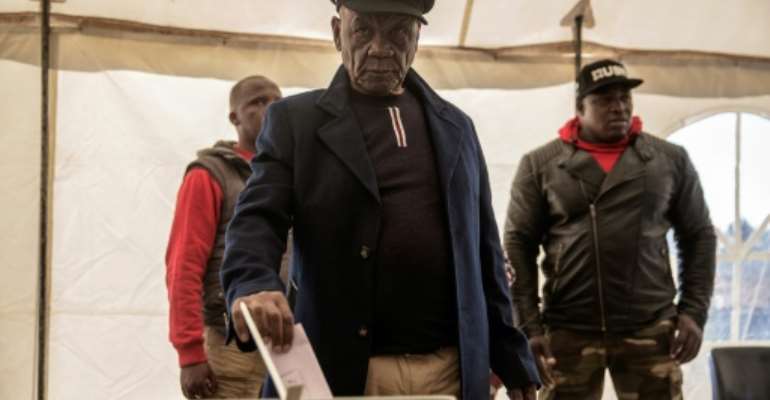 Lesotho Prime Minister Thomas Thabane (C) was summoned by police for questioning over alleged links to the 2017 murder of his estranged wife. By GIANLUIGI GUERCIA (AFP/File)

Lesotho police on Monday summoned Prime Minister Thomas Thabane for questioning over alleged links to the 2017 murder of his estranged wife.

The brutal assassination of Lipolelo Thabane sent shock waves through the tiny mountainous kingdom, which is entirely surrounded by South Africa.

She was gunned down outside her home in Lesotho's capital Maseru on June 2017, two days before the inauguration of her husband -- with whom she had been embroiled in bitter divorce proceedings.

The case was brought back into the spotlight this month by a letter from Lesotho's police chief, which claimed that communication records from the day of the crime picked up Thabane's mobile phone number.

Dated December 23, 2019, it became public in court documents filed over a separate matter.

On Monday, police summoned the prime minister to their office to "cast a light" on the 58-year old's murder.

"This case does not only attract the attention of Basotho nation (Lesotho) but it is of international concern," deputy police commissioner Paseka Mokete said in a statement.

Thabane, 80, said last week he planned to resign after senior members of the All Basotho Convention (ABC) party accused him of hampering investigations into the killing. He gave no timetable for when he would be stepping down.

He is expected to report to the police on Wednesday and vowed to cooperate with the justice system.

"As the prime minister I have undertaken an oath to respect and protect the constitution and all other laws of Lesotho," he told reporters in Maseru, promising to "get to the bottom of this matter".

Several high-profile figures have also been summoned to provide information on the case, including Thabane's current wife Maesaiah Thabane.

But police have been unable to trace her whereabouts since she failed to turn up for questioning on January 10. A court has since issued a warrant for her arrest.