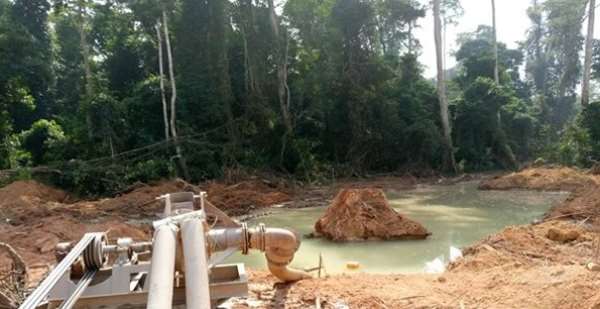 Ghana risk losing one of its important forest reserves due to illegal mining activities popularly known as galamsey.

The Oda River Forest Reserve has come under strong attack from Chinese Illegal gold miners and their Ghanaian collaborators.

Several excavators and other mining equipment have been taken into the reserve and about four mining sites already created, and the illegal miners looking poised to continue their operations despite resistance from State security apparatus.

The Oda River Forest Reserve derives its name from the Oda River that drains through the Reserve.

It lies within the Southwest corner of the Bekwai Forest District.

The Oda River Forest Reserve is U-shaped with a flattered base running North.

It falls under the Amansie Central Administrative District with Headquarters at Jacobu, Ashanti Region.

The Reserve is home to several animal species and as it comes under attack, those animals are at risk of losing either their habitat or lives, something that must be of concern to animal rights advocates and environmentalists.