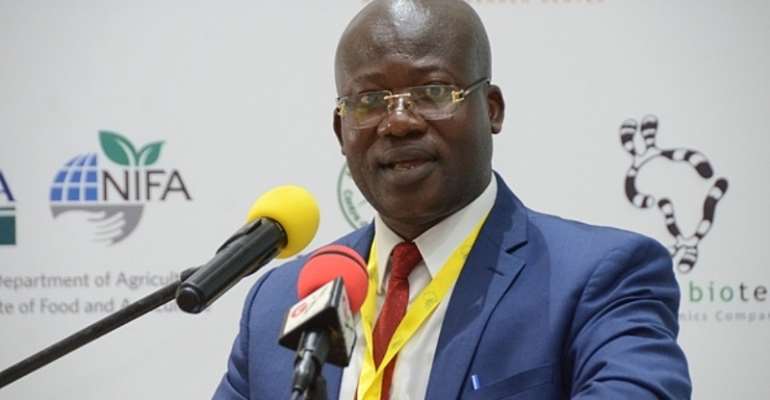 Director of the West Africa Centre for Crop Improvement (WACCI) at the University of Ghana, Prof. Eric Yirenkyi Danquah, has been appointed to serve on the board of a new $25 million United States Agency for International Development (USAID) food security initiative.

The Cornell University-led initiative called the Innovation Lab for Crop Improvement (ILCI) is a new global food crop research program that will work to deliver enhanced agricultural production tools in developing nations across the world. Prof. Danquah will serve on the External Advisory Committee (EAC) of ILCI.

The 5-year initiative will work to advance plant breeding tools, technologies, and methods aimed at delivering staple crops that can increase yields, enhance nutrition and ensure greater resistance to pests and diseases. The ILCI will be an integrated research and delivery program with multidisciplinary expertise in cutting edge agricultural development, from plant breeding and machine learning to quantitative genetics and gender inclusion.

The USAID administrator, Mark Green, announced the establishment of ILCI as part of the U.S. Government’s Feed the Future initiative in October 2019 at the World Food Prize program in Des Moines, Iowa. Feed the Future Innovation Labs are led by U.S. Universities in collaboration with partner country research institutions.

ILCI will be officially launched next week in San Diego, USA at a side event at the Plant and Animal Genomes (PAG) Conference, at which Prof. Danquah will be present.

Prof. Danquah in a comment on his appointment expressed delight at the opportunity to serve on the initiative, noting it opens doors for win-win collaborations. He intimated that under the recently awarded ACE Impact Project grant, WACCI is working with partners globally to transform the Centre into an Agricultural Innovation and Entrepreneurship institution. He called on Africa Governments to invest in Centres of Excellence like WACCI if the governments were serious about ending hunger, achieving food security and improved nutrition and promoting sustainable agriculture by the 2030 set date.

Based at the Global Development Department of Cornell University, previously known as the International Programs in the College of Agriculture and Life Sciences, the project will support national breeding programs in East and West Africa, as well as South Asia and Latin America. The ILCI will serve as a model and catalyst for delivering improved tools, technologies and methods for the breeding of crops such as legumes, roots, sorghum and millet, with the potential to expand to a variety of staple crops. Dr. Stephen Kresovich, Professor of Plant and Environmental Sciences at Clemson University and a former Vice Provost for Life Sciences at Cornell University will lead the ILCI as Director.

Raymond Archer Smells NPP Hands In Demolishing Of His $10m F...
42 minutes ago