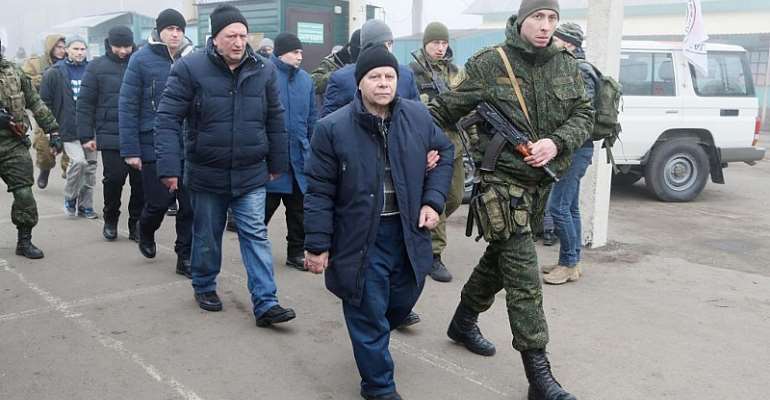 The leaders of France and Germany hailed an exchange of 200 prisoners between pro-government and separatist forces in eastern Ukraine on Sunday, which French President Emmanuel Macron's office said was an outcome of a meeting between leaders of Ukraine and Russia in Paris in December.

Ukraine and Russia-backed separatists swapped detained fighters for civilians and members of armed forces who had in some cases been held for years in a conflict that broke out in 2014, following Moscow's annexation of Crimea.

The exchange followed a Paris meeting between Russian President Vladimir Putin and his Ukrainian counterpart Volodymyr Zelensky in their first face-to-face talks since Zelensky became president earlier this year.

It was “in line with the engagement taken on 9 December, during the 'Normandy' format summit in Paris, to facilitate the release and exchange of prisoners of the conflict by the end of the year”, read a statement released by the French presidential office.

Normandy format refers to talks aiming to end the conflict in Ukraine's eastern Donbass region between leaders of France, Germany, Russia and Ukraine, who first met on the side lines of D-Day ceremonies in Normandy, France, on 6 June 2014.

The four countries secured a ceasefire deal in Minsk in 2015, though it has rarely held in a conflict that has killed more than 13,000 people and displaced hundreds of thousands to date.

The format was resurrected after a three-year lull as part of a shift in Macron's foreign policy priorities towards promoting dialogue with Russia.

It was the second prisoner swap in three months after each side in the conflict released 35 detainees in a long-awaited exchange.

At the December summit in Paris, leaders also discussed the withdrawal of heavy weapons, the restoration of Kiev's control over its borders with Russia and preparation for local elections in the eastern region.

“New work is still needed to allow the exchange of all prisoners linked to the conflict,” read the statement from Macron's office, which also called for “total and unconditional access of international organisations, notably the International Committee of the Red Cross, to all detained persons”.