Born to revolt: Why the French go on strike 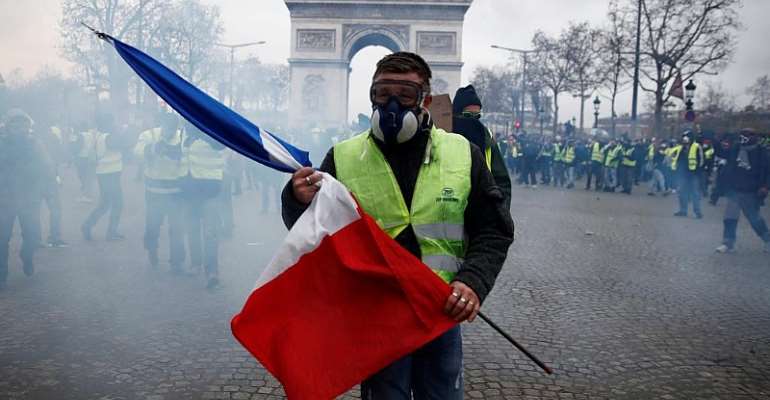 France, it sometimes seems, is either in the throes of a major strike or facing the looming shadow of one. Workers in the country go on strike more than most nations in Europe. The current open-ended stoppages, which began on 5 December, have halted most public transport in Paris and inter-city trains.

The reasons why the French strike so much, analysts say, are multiple and complex, and touch on the French republic's revolutionary origins, its educational philosophy, union traditions and even the electoral system.

"I cannot say if France is the most strike-prone country in the world but it is certainly a country ... that is above the European average, and always near the top," researcher Kurt Vandaele of the European Trade Union Institute (ETUI) said.

Into its fourth week, the transport strike against planned pension reforms is the biggest work stoppage in decades, outlasting the 22-day strike of 1995 that ultimately saw the government capitulate over similar reforms.

France has had a rail strike every year for 72 years since 1947, according to the state-owned SNCF railway company.

And figures from the labour ministry show that between 2005 and 2017, 118 work days were lost to strike action per 1,000 private sector workers on average per year.

The analysis included strikes at state-owned transport companies SNCF, RATP and Air France, but not the public sector where workers are much likelier to down tools.

Among 23 countries for which the International Labour Organisation counted "days not worked per 1,000 workers due to strikes and lockouts" in 2016, France came second after Argentina.

An ETUI chart of average strike days in Europe between 2010 and 2017 lists France second after Cyprus.

A comparison of OECD countries by the Hans Boeckler Foundation saw France top a list of working days lost per 1,000 employees from 2008 to 2017 - beating Denmark, Belgium, Canada, Spain, Norway, Finland, Britain, Germany and the United States, among others.

'Built on revolt'
"Yes, one can say there is a real strike culture in France closely tied to a long history of revolt," said Jean Garrigues, a historian at the University of Orleans.

"Modern France was built on revolt," Garrigues added, pointing to the 1789 revolution that toppled the monarchy and gave rise to the first French Republic in 1792.

"There is a general conviction that revolt is necessary, that violent means or at least forceful means are necessary" when you do not agree with the government, he said.

Polls show a majority still sympathise with the current strikers, despite millions of commuters having to get up earlier, walk further, and jostle for space on infrequent and overcrowded trains and buses.

"The French spirit, if there is one, is one of scepticism," said Jean-Pierre Durand, a professor in labour sociology.

"This means that as soon as any reform is announced, a large number of French people start questioning ... where the traps are."

"It implies a somewhat irrational attachment to one man - a near religious belief in the ability of one man to change everything," he explained.

'Unions unable to influence'
The right to down tools was one of the first social rights acquired by the French, in 1864. And it has been used often, perhaps most prominently in 1968, when the government raised the minimum wage after a student revolt morphed into mass protests and a wildcat strike that paralysed the economy.

In France, unlike many other countries, withholding labour is an individual civil right unrelated to whether one is a union member or not.

French distrust of politics and authority also extends to unions, analysts say, which is why workers are willing to strike, sacrificing their pay, to try to ensure their voice is heard.

According to ILO statistics, only eight percent of French workers - even less in the private sector - belonged to a union in 2015, the latest year for which data was available.

The number is down from about 20 percent in 1970, and a third of the European Union's 23-percent average, according to the ETUI.