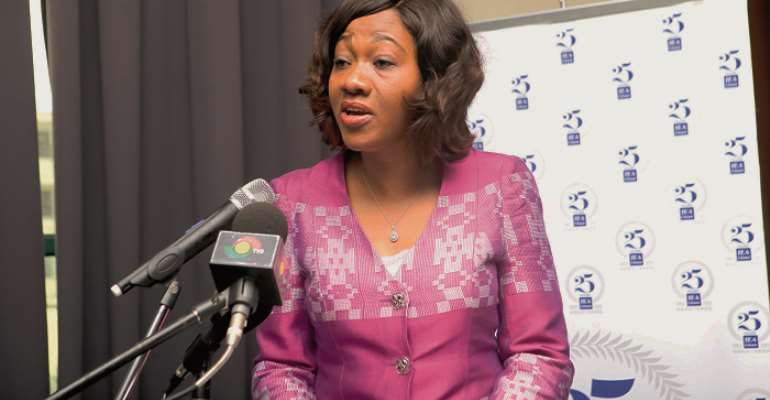 Fellow Ghanaians, isn't it a heartbreaking paradox that Ghanaians will ask Ghanaians to help them make Ghana commit both political and economic harakiri? A practice that has left the country bleeding profusely on daily basis since independence.

The godforsaken amount of ¢444,846,663 that the Electoral Commission is asking the Parliament of Ghana to approve for a new Voter's Register is nothing more than an avenue to create-loot-and-share! It is simply a waste of public funds, finding work for the idle hands so that in the process, some sort of "political carcass" would have been created for unmerciful political vultures to feed.

Corruption in the Akufo Addo led government has been legendary and the most "competently" managed the department. President Akufo Addo indeed deserves a gold medal to that effect.

The President seems to possess the most powerful deodorant. Anytime a corruption rot surfaces up to diffuse, he deodorizes it with immediate effect. A man who should have become the best president ever in our history is fast becoming the worst president ever.

But you see, a man who sends his child to the land of our ancestors alive would certainly have the child returned, only that he won't be able to recognize him or her! Because such a child would return with one eye.

For the record, Ghana is not anybody's personal fiefdom, and certainly cannot be the cash cow of any hungry political gladiators and scavengers who are disguising as leaders. History teachings mankind that those who always want to ride on the back of Tigers for power will finally end up inside the bellies of the Tigers!

Fellow Ghanaians, repetition of history has always been spine-chilling and nauseating in human history. Let desperate power seekers be told. Let political leeches be informed. Let every political parasitic entity knows this! That the God of this country won't sentence us into eternal political torment by politicians. Walahi. God will liberate us from evil rule.

Indeed, the betrayal of honesty, the miscarriage of justice in our justice system, the absence of selfless leadership; the deliberate collapse of commonsense in our governance processes manifested in the misplacement of government priorities, and the expiration and extinction of God-consciousness among majority of our representatives of State in the political discourse of this country, are invariably the factors that have contributed, enormously, to our collective comatose state of affairs as we have it today. Walahi.

Excessive practice of "stomach politics" and the general perception about political leadership not being selfless service to the citizenry, but as an avenue to compensate businessmen who financially contributed to the assumption of power by political parties, is undeniably the reason why many Ghanaian communities have been literally reduced to mere poverty clans in our part of the world. Politicians continue to manufacture and invent idiotic if not stupid standards to satisfy their whims and caprices, mostly, to suit their larger than lifestyles and for the pursuit of illegitimate personal vendetta.

These factors have in combination provoked the old-age underdevelopment we have been battling with for more than sixty years!

Who would have believed that one day the son of the country's second President, 5th head of state, and Ghana's 1970 Chief Justice, Edward Akuffu, could eventually inherit his father as president, and still fixing the mess his father left off?

We simply have leaders who won't make any sacrifices for future generations. Every aspirant merely wants his name in the presidential list of this country. What shall become of his legacy tomorrow is not his portion. If in the end their tenure is used to reward both new and old concubines with massive tweaking backsides, there's no problem. If every member of their families have been able to embezzle and amass wealth more than what they want from the very limited resources of the country in just four years, it is enough as a legacy even if pregnant women in the remotest parts of the country continue to lose their babies through miscarriages due to bad nature of roads and absence of health facilities.

We will continue to struggle, suffer and groan for a very long time under this misrule of these political demons Ghana is afflicted with. I don't know the solution but if we ever have a detribalized president who didn't win power with the proceeds of sponsorships from the ill-gotten opulence of businessmen, Ghana will develop.

Let's now go into the substantive matter of this article. And to do that permit to travel you down memory lane.

On the 29th of October 2015, the Peace Council of Ghana led by Prof. Ashanti as chairman organized a Voter's Register Forum for the political parties in the country. It was done at the behest and bitter complaints of the then opposition New Patriotic Party, NPP. Like an over-pampered child that has misplaced a favorite candid, the party cried that the compilation of the 2012 Voter's register was simply bloated and was not constitutionally sound for the 2016 general elections.

Some of the arguments they raised included: foreigners in the register, minors in the register, and some pictures of electorates in the register they believed were products of Photoshop. The party was not also happy that many Ghanaians used National Health Insurance Card for identification purposes during elections even though it is one of the six other means to identify a Ghanaian.

With the claim of foreigners in the register, Mr. Mac Manu quoted some 76,286 people the NPP's investigative team discovered to be registered voters in Togo as well as in Ghana. He claimed that this figure of foreigners came into Ghana's Voters' Register through the National Health Insurance where massive registration of Togolese was done by the NDC.

How credible this said investigative team of the NPP was left to the wondering of viewers and listeners of that forum.

For the NPP, these irregularities must not be found in a credible voter's register. Many Ghanaians listened with keen interest when Mr. Mac Manu presented to the Peace Council why they demanded the new register.

However, their arguments were soon to be deflated and Pooh poohed when the NDC's General Secretary did his party's side of the presentation. The NDC's political General Mosquito argued that the claim of the NPP about the voter's register being bloated was either an April fool day's joke carried too far, or they were deliberately playing the devil's advocate as far as the compilation of the 2012 voter register was concerned.

All these principles were employed in the 2012 compilation and all participants were satisfied by the outcome including the NPP according to the Mr. General Mosquito. Hence, the NPP's claim of bloated voter's register, couldn't hold water and nothing more than a mischief.

Then, they moved to the claims of foreigners and minors and deceased Ghanaians in the voter register. Over there too, the NPP was whining for nothing. Yes, the NDC agreed with the NPP that possibly these constitutionally disallowed groups (foreigners and minors) who had found their way into the voter's register might be accurate, but what mechanism could be put in place so that in the process of getting a new voters' register, the same mistakes that brought foreigners, minors etc. into the old register could be avoided? Although the NPP traveled all the way to Togo, Burkina Faso, and Côte d'Ivoire inspecting these countries' voters' registers in order to identify non-Ghanaians, they could not tell what to do in order to avoid bloating the new voter's register further if a new one was to be adopted.

As a result, the Peace Council which was chairing the Voter's Register Forum thought it was not necessary raising an alarm over a voter's register they (NPP) took part in its compilation with full satisfaction in 2012, only to make a u-turn to raise challenges they themselves didn't have solutions for. The issue, therefore, died a natural death after that forum and many Ghanaians even cursed and hissed at the NPP for crying wolf where there was not even a cat.

Fellow Ghanaians, have the NPP now found mechanisms to ensure that those challenges they claimed the voter's register was challenged within 2015 which was dismissed by the Peace Council and Ghanaians, or why are they demanding a replacement of a voter's register that brought them into government?

To sincerely answer this compelling question, an honest person can see that, there's really much to this demand than a new voter's register. Perhaps the eight years old hunger in opposition is what the NPP wants to satisfy, so they are looking for every opportunity to create and loot and share political spoil of war! Otherwise, it is for rigging purposes.

Meanwhile, I don't think Ghanaians are ready for any electoral heist in these trying times.

God Bless Us All.

The Writer, Iddrisu Abdul Hakeem, is a MasterCard Foundation Scholar (Alumnus) At KNUST.