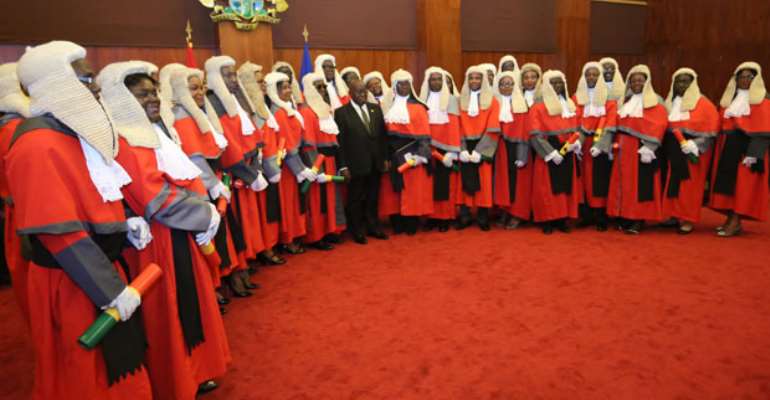 Some of the Superior Court Judges with the President after the swearing in. Picture by Gifty Ama Lawson.

President Akufo-Addo yesterday swore in 45 new judges to the superior courts, with a strong admonition not to engage in corrupt practices.

They included 11 judges to the Court of Appeal comprising five women and six men, and 34 to the High Court comprising 22 women and 12 men.

Administering the oath of secrecy, the President tasked the top judges to always uphold the integrity of the judiciary.

The debate on the fight against corruption in the country was rekindled when the latest Afrobarometer report released by the Center for Democratic Development (CDD) showed that among key public officials in Ghana, the police, judges and magistrates, Members of Parliament, civil servants and tax officials were most widely perceived as corrupt.

The President said at Jubilee House yesterday that “the people of Ghana cannot and will not tolerate a repetition of the abysmal dismal tale of acts of corruption that were revealed. You have a big duty to demonstrate integrity in all your dealings if public support for the judiciary is to be maintained.”

He reminded the judges that “our generation should build a new Ghanaian civilization where the rule of law is not a slogan, but an operating principle for the development of our state, where the separation of powers is real and meaningful, where public officials behave with honesty and trust, where the liberties and rights of our people are fully protected and where law and order provides a firm basis for our social and economic development so that the dreams of freedom and prosperity that animated the great patriots who founded our nation can find expression in our time.”

He said “all of us, from the public sector, the security agencies, the private sector, political parties, civil society, religious bodies and traditional authorities must work together with our different views and different perspectives for the Ghana project.”

He said he wanted to lead “a united Ghana governed according to the rule of law, respect for individual liberties, human rights and the principles of democratic accountability; a Ghana that meets the requirements of social justice and solidarity and a Ghana where we look past commodities to position our country in a global market place,” insisting “it is a collective enterprise to which we should all commit ourselves in unity and in sincerity.”

President Akufo-Addo emphasized “I have an unshakable faith in boundless prospects of the Ghanaian people and of Ghana's future and will work for it.”

On behalf of his colleagues, a newly appointed High Court judge, Justice Aboagye Tandoh, assured the President and to a large extent the government and people of Ghana that “we will be guided by the advice that you gave us in your speech and administer justice for and on behalf of the people of Ghana you have entrusted the task onto us. We shall not disappoint.”

Justice Anthony Oppong, who spoke on behalf of his colleagues at the Court of Appeal, said “we assure your Excellency in particular and the good people of this country in general that we will not and dare not disappoint.”

“We assure you further that we will execute our duty with skill, with knowledge, with wisdom and with understanding, and we will do so without fear, without favour, without ill-will and without affection; we are confident that we will live up to expectation and make the judiciary and Ghana proud,” he added.

The three Supreme Court judges who were vetted and approved by Parliament after the President nominated them were also sworn into office.