Sudan cinema flickers back to life after Bashir ouster 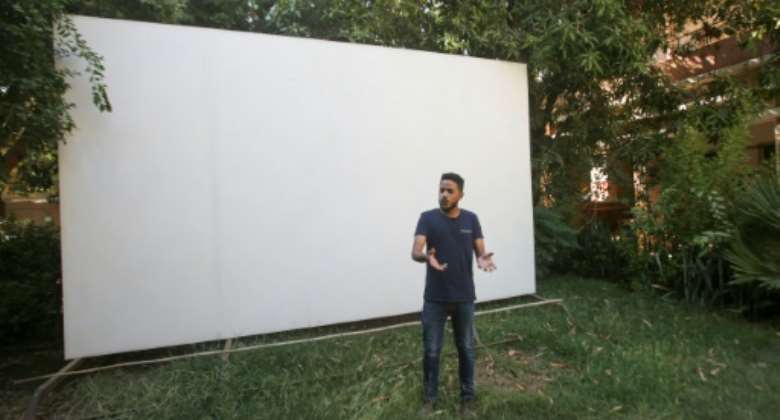 Sudanese cinemas are flickering back to life after the ouster of autocratic president Omar al-Bashir who was deposed by the army following months of street protests. By ASHRAF SHAZLY (AFP)

Talal Afifi has worked for years to revive Sudanese cinema which has languished through decades of authoritarian rule. With the fall of longtime autocrat Omar al-Bashir, he sees new hope.

Bashir's Islamist-backed rule of 30 years had seen cinemas shuttered and US sanctions prevent imports of vital equipment in a country once known as a pioneer for film-making in Africa.

When Afifi attended a 2008 short film festival in Munich, the winning film -- an Iraqi documentary shot on a handycam -- inspired him to return home and set up a training centre and production house.

"I wanted to remind people that there is a place called Sudan, which was once renowned in the field of cinema, and that it still has its heart beating for this art," he told AFP.

The Sudan Film Factory, based in a suburban Khartoum villa, has since trained more than 300 young men and women in various aspects of film-making.

Today, following Bashir's ouster in April, 42-year-old Afifi and his colleagues are hoping film-making will get a fresh boost in the northeast African country.

Sudanese cinema dates back to the shooting of the first silent film in 1898, a few years after the invention of moving images, according to veteran director Ibrahim Shaddad.

By 1946, a fleet of mobile cinemas were travelling across the country showing films under the evening sky.

"There were no closed cinema halls at that time because of extreme heat and lack of air conditioners," said Shaddad.

Legendary film-maker Jadallah Jubara, who recorded such key moments as Sudan's 1956 independence, later made his mark across the continent.

By the 1980s, Sudan had more than 60 cinemas screening Hollywood, Bollywood and Arabic movies.

But Bashir's seizing of power on the back of an Islamist-back coup in 1989 delivered the industry a powerful blow.

"There were five or six different government agencies that had the power to monitor us. That was nerve-wracking," said Afifi.

By 1996, Bashir's conservative Islamist regime had shut down most of the country's cinemas.

On top of that, an American trade embargo made it difficult to import foreign films, update old software or acquire equipment.

Sudanese cinema dates back to the shooting of the first silent film in 1898 and by 1946 a fleet of mobile cinemas were travelling across the country showing films under the evening sky. By Ashraf SHAZLY (AFP)

Despite these hurdles, Afifi and his team kept the art alive even under Bashir's regime, screening documentaries and foreign films on rooftops in the capital.

He recalls an "unforgettable" night in 2010 when he screened six short films on the roof of Khartoum's Goethe Institute shot by 15 students after a training course at the Sudan Film Factory.

It "was probably the first time in a very long time that Sudanese films were shown to a Sudanese audience on Sudanese soil," Afifi said.

Graduates of the institute were heavily involved in producing "You Will Die at Twenty," a critically acclaimed feature about a Sudanese boy cursed by a prophecy of his early death.

"You Will Die at Twenty" was screened at international film festivals in Berlin, Venice and in Egypt's El Gouna. It even won prizes in Venice and El Gouna.

Bashir's ironfisted rule came to an end in April when he was deposed by the army in a palace coup following months of protests.

Talal Afifi has set up a training centre and production house in his native Sudan that has trained more than 300 young men and women in various aspects of film-making. By ASHRAF SHAZLY (AFP)

His overthrow has given film enthusiasts fresh hope of reviving Sudanese film-making.

But Ibrahim, sitting in front of shelves full of old cameras laden with dust, cautioned that the country lacks studios, arts funding and regulations for film-making.

His group has approached the country's new Prime Minister Abdalla Hamdok with proposals to revive the film industry -- but as the country undergoes fundamental political change, cinema is far from being a priority.

Bashir's ouster, however, has given an overall boost to freedom of expression in a country which for decades lived under severe regime-imposed restrictions.

For decades, thousands of women were flogged and fined for "immoral acts" under this law, which was inspired by Islamic sharia law.

Sudanese film-makers know that the road ahead is tough.

"It's not enough to only love cinema to make cinema," said young film-maker Mahira Selim.

"Cinema is an industry... and this industry doesn't exist in Sudan," she said.

"But there is hope now."

Gov’t to set up 5-member committee to lead extensive stakeho...
20 minutes ago