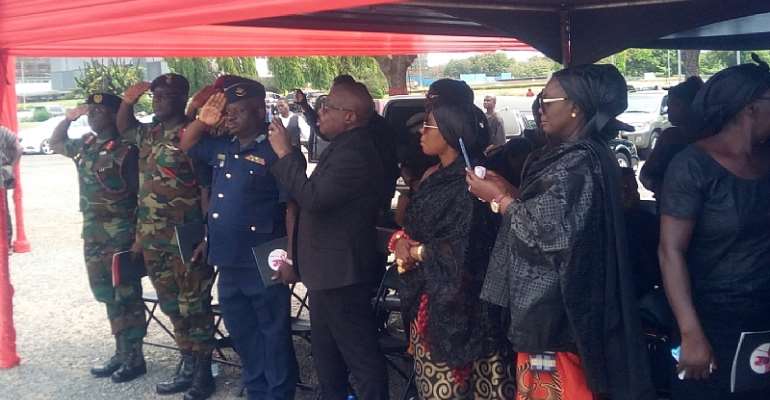 The late Omanhene of Kadjebi- Akan, Nana Ogyeabour Akompi Finam II, known in private life as Lt.Col Joseph K Akompi has been laid to rest in a colourful ceremony held in Accra.

The ceremony was held at the State House, the forecourt of Parliament in a full military parade.

The late Akompi was a retired military officer honorably released from the military after sixteen years of service and in December 1987 as a Lt. Colonel.

He was enstooled as the Paramount Chief of the Kadjebi- Traditional Area, in 1985 under the stool name Nana Ogyeabour Akompi Finam II.

He was a pioneering figure for the creation of the Oti Region.

The ceremony was attended by several traditional authorities such as Nana Kwaku Dua II, Krontihene of Kadjebi.

Nana Kwaku Dua described the late Omanhene as a peace-loving and well-respected chief amongst his subjects.

He said the final funeral is slated for 4th to 9th December 2019, and will be attended by President Nana Akufo Addo Danquah.