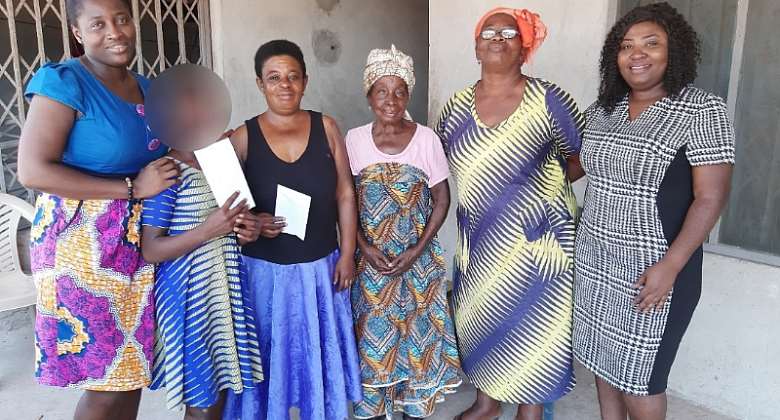 Canadian-based Pastor, Prophet Dr. Kofi Danso who presides over the Miracle Arena for all Nations Church in Toronto, Canada has extended educational support to three girls below age 15 years.

The educational support extended to these girls from the Sowah and the Benyin families amounted to ¢1,500.00. The two families reside at Aplaku and Odorkor respectively, both suburbs of Accra in the Greater Accra Region.

The first girl from the Sowah family is currently seeking justice at the Gender Court 5 in the Greater Accra Region after been defiled by her school mate’s father. The fourteen-year-old was defiled in July 2015 on her way to school and got partially paralyzed.

Although the family has now enrolled her back into school, the family finds it difficult to purchase her educational materials to complement her schooling, hence Prophet Danso's donation of GHC400 to the family to purchase the books for the girl. An additional GHC200 was presented to her mother to purchase medication as the team met her sick on November 12, 2019.

Two girls from the Benyin family also received a cash donation of ¢900.00 for paying fees and buying educational materials for school. The first daughter of the family of five was defiled by her blind father’s senior brother in 2015. The girl then eight-year-old had to undergo vagina surgery at the Korle Bu Teaching Hospital. The perpetrator was sentenced to 20 years in prison.

Presenting the donations on behalf of Prophet Danso, his publicist Eyra Doe who visited the families to interact with them in their homes noted that she had followed the plight of the two defiled girls since the story was aired about four years ago on Atinka FM, hence she felt it was in the right direction to support them through school.

The Sowah and Benyin families expressed their gratitude to Prophet Kofi Danso and the Atinka TV crew for their act of generosity.

Prophet Danso is the Founder and General Overseer of Miracle Arena for All Nations with its headquarters based in Toronto, Canada. Since its inception in Toronto in 2011, the church has now expanded to 18 branches across the world. Prophet Danso’s teachings are widely broadcasted on various TV Networks like Word Network, Yes TV, Vision TV, and many social media channels, enabling the Gospel message to be spread. He has been into ministry for over 20 years and has engaged in many philanthropic activities in Ghana and the world. Highlights of his philanthropic engagements are donations to various orphanage homes in Accra and Kumasi and donations towards the Bahamas Relief for victims.