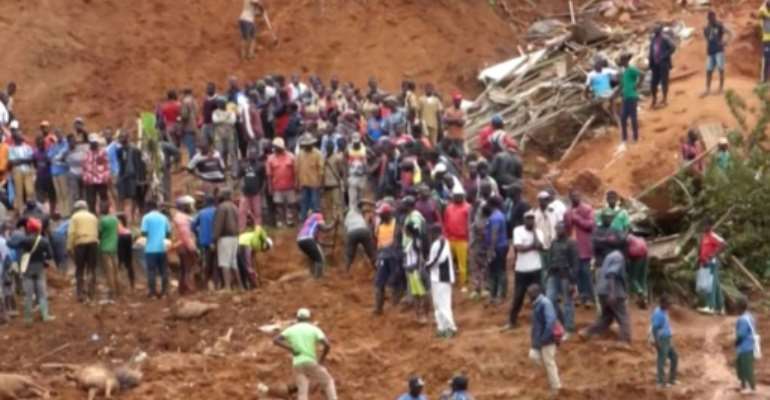 The disaster followed two days of torrential rain in the city of Bafoussam. By - (AFP)

Cameroon rescue workers resumed a grim search for victims Wednesday after torrential rains triggered a mudslide that swept homes off a hillside, killing dozens of people including children.

A number of residents are still missing after part of a hill collapsed in the mudslide that hit the city of Bafoussam in the highlands of western Cameroon on Tuesday.

Among the 42 confirmed dead were 26 children and 14 women, four of whom were pregnant, according to the local authorities.

Rescue workers had suspended the search on Tuesday night because of the dangerous conditions in the area after days of heavy rain.

Pictures social media showed ramshackle houses having crumbled into the ochre-coloured terrain and men in hard hats digging away at piles of mud in the search for survivors.

Map of Cameroon locating deadly landslide in the western city of Bafoussam. By (AFP)

The disaster has triggered an outcry in opposition circles and on social media about the state of urban housing development in the central African country.

"No new body has yet been removed from the rubble," said Francois Fotso, head of the rescue service for the Gouache IV neighbourhood, where dozens of houses that were built precariously on a hillside were swept away.

"There are still people missing but it would be risky to give a figure," Fotso told AFP by telephone.

"I had the impression that the roof of my house had flown away. As I was getting up to check what was happening, the house collapsed on me and my family," Gauche IV resident Victor Tankou told AFP by telephone while being treated in hospital with three of his surviving children.

He said his 16-year-old daughter had died in the tragedy and that "mud completely covered her".

At least 42 people were killed in the landslide in the western Cameroon city of Bafoussam. By - (AFP)

A local administrative officer said the collapsed houses were built on a hillside in a risky area of the city, which lies about 300 kilometres (185 miles) northwest of the capital Yaounde.

"There were sometimes landslides below, but we were far from imagining that this place was a risky area," Fotso added, claiming that the local residents had never been informed of the dangers by the authorities.

The Social Democratic Front (SDF), one of Cameroon's main opposition parties, lashed out at the authorities for "abandoning the vulnerable people" who live in such areas to stay close to urban centres.

Kamto, head of the Movement for the Rebirth of Cameroon (MRC), was released from prison only this month after nine months behind bars.

The rainy season is currently raging in Cameroon, and has hit neighbouring Central African Republic and Nigeria in recent days.

In July last year, five people died in a landslide and flooding in Cameroon's southwestern coastal resort of Limbe, in an area even more prone to such disasters.