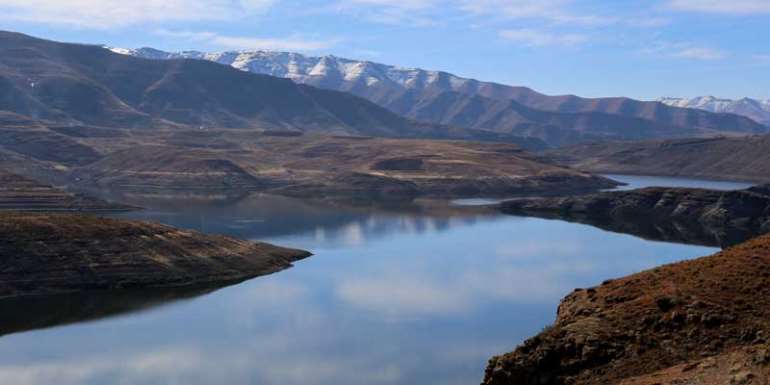 In October 2019, global engineering, design and advisory company Aurecon celebrates thirty years of continuous presence in Lesotho, following many periods of intermittent involvement in Lesotho stretching back to the 1950’s. From the feasibility studies proceeding the mammoth Lesotho Highlands Water Project that continues to reduce poverty and improve the standard of living of the population, to world-class bridges and buildings, as well as corporate social initiatives, Aurecon is proud to be firmly established in an African country committed to making its infrastructure and resources future ready.

From then to now
Sir Evelyn Baring, the British High Commissioner to South Africa and the Protectorates in the early 1950s, had an idea that a dam could be built on the headwaters of the Orange River in Basutoland (now Lesotho). He considered the water could be exported to South Africa – possibly to the expanding Free State goldfields and for irrigation in the Caledon River valley of the Eastern Free State ‒ and commissioned consultants to carry out initial investigations into the potential of such a scheme.

The Basutoland investigations coincided with the arrival of a new Director of Public Works, Sir Peter Ballenden, in the territory in the 1950s. Together with representatives of the consultants, he explored the catchment of the Senqu (as the Orange is known in that part of the world), travelling on horseback in the upper reaches and then down the river by boat.

The plan at the time was to build a dam in the region of Quacha’s Nek, but Ballenden had reservations and he looked for a second opinion. During his first leave, he went to Cape Town and called on an engineer who had impressed him when they had met some years before. This engineer was Ninham Shand, the founder of the engineering consultancy which would later merge with Africon and eventually become Aurecon.

Together, the pair decided to investigate how water could be stored in the mountains and sold to South Africa, generating electricity along the way. And so began an association that ultimately would lead to the Lesotho Highlands Water Project.

Decades of progress
The Lesotho Highland Water Project (LHWP) is one of the largest ongoing development projects in the world and the award-winning, multibillion Rand, bi-national project is widely regarded as an African success story. It has pioneered the way for peaceful cooperation and mutually beneficial socio-economic development across the continent. Aurecon has played various key roles in the project since its inception six decades ago. Phase 1 comprised the major water transfer and hydropower components involving the construction of tunnels and dams, including the iconic 185 metre-high Katse Dam, designed to divert water from the Senqu (Orange) River to the Ash River in South Africa.

Some of the challenges of the project included overcoming the large-scale, technically complex nature of the water transfer project, working in a harsh mountain environment and pioneering new systems to manage the biophysical and social aspects of the project.

In 2006, the South African Institution of Civil Engineering (SAICE) named the LHWP as the Most Outstanding Engineering Achievement of the Century.

World-class engineering
Other notable projects that Aurecon has completed in Lesotho include the Mokhotlong to Sani Pass Road project , which won the 2016 South African Institute of Civil Engineers (SAICE) and South African Forum of Civil Engineering Contractors (SAFCEC) award for Transportation Engineering Project of the Year; the Lesotho Lowlands Water Development Project Phase II , which contributes to a sustainable water supply for around 15% of the country’s population; a number of striking commercial buildings including the Vodacom Head Office in Lesotho , as well as a project that overhauled the country’s health care infrastructure .

Aurecon has forged strong ties with Lesotho and its people. In 2018, the company started to support Kick 4 Life, a football charity that has since grown to establish a football club that is exclusively focused on social change.

“For three decades, Aurecon has continually been providing the technical expertise, advisory services and support that has seen much progress being made in Lesotho. We look forward to the next thirty years,” comments Peter Blersch, Aurecon Contracts Lead, Africa.