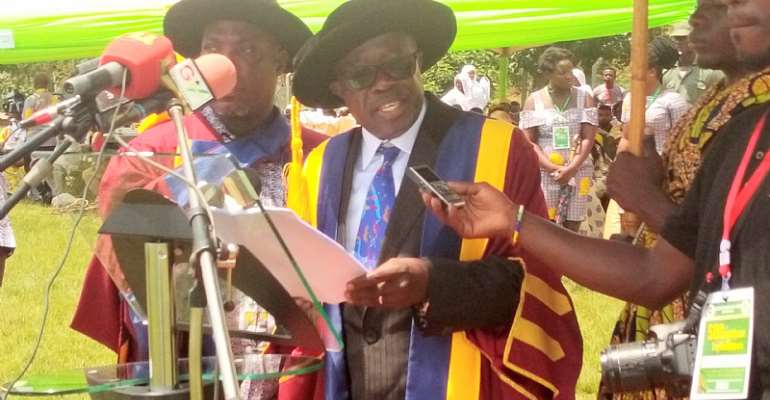 The College of Health and Well-being at Kintampo in the Bono East region has marked its 50th anniversary and the 7th graduation for 2016, 2017 and 2018 graduating students at a colourful durbar at Kintampo.

The college, which used to be known as Kintampo Rural Health Training School, was fully established in 1969 with the mandate to train middle-level health professionals to provide quality and comprehensive health care to people, especially those living in deprived communities.

It has in recent years improved and expanded in programme content, scope and students intake and remains the only health institution of its kind in the country and the West African sub-region; no wonder it continues to attract highly qualified applicants into its 14 programmes of study each year.

The theme for the occasion was “50 years of training health professionals – the relevance of College of Health and Well-being in Ghana and the way forward.”

The Director of the College, Dr. Kwabena Opoku-Adusei said with 16 pioneering students in 1969, the college can now boast of about 4,433 students who are undergoing training to become physician assistants, field technicians as well as in areas such as radiology, dental surgery, disease control nutrition, health promotion and health information among several others.

Dr. Opoku-Adusei called on the government to upgrade the municipal hospital at Kintampo into a Teaching Hospital by expanding the facility to limit the college’s over-reliance on other hospitals across the country for students’ practicals.

He further called on all stakeholders to contribute their quota in making the college a centre of excellence and thanked all those who have contributed in diverse ways to bring the institution to this far.

The Minister of Health, Kwaku Agyeman Manu assured management and students that his ministry and the National Accreditation Board, as well as all other relevant state institutions, are almost done with arrangements for the college to run a degree programme for Physician Assistants.

“I am very happy to announce that the process has moved fast and Kintampo’s accreditation will be announced very soon. I have also directed that no programme should be started in any health training school until accreditation is obtained.”

Mr. Agyeman Manu, who is also the MP for Dormaa Central, further gave the assurance that his ministry would do all it can to address the college’s challenges, especially in the areas of infrastructure, affiliation, accreditation, transportation, utility bills and financial clearance for employment.

The Special Guest of Honour, Prof. Christopher Ameyaw-Akumfi identified financing and inability to adequately contain the growing number of students as some the key bottlenecks militating against the country’s educations system over the years.

“During my days as the Minister of Education, on what we used to label as cost-sharing, it generated a lot of debate between me and governors of higher education. These days, we seem to have come on board and we should congratulate ourselves” and added that with introduction of the Free SHS, parents now can invest more on their wards tertiary education.

The Bono East Regional Minister, Kofi Amoakohene, announced that government has given approval for the siting of the regional health directorate at Kintampo, adding work on a two-storey building which will serve as office accommodation as well as staff bungalows will start by the end of this year at Kintampo.