Sex For Grades Before Another Exposé Strike 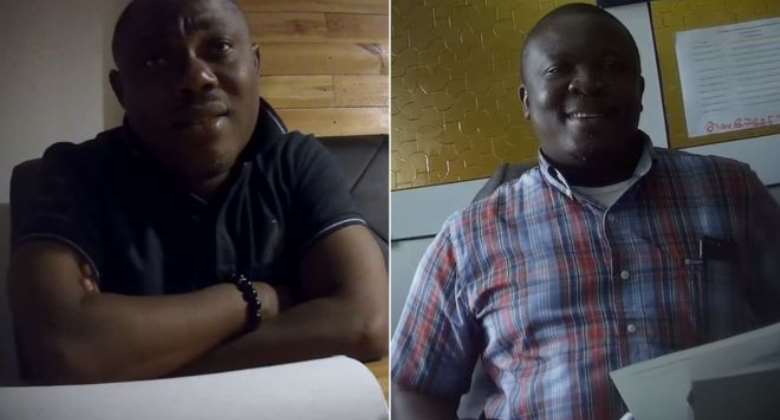 Fellow Ghanaians, nothing more, nothing less. If she wears a short skirt and a tight sweater and her figure describe a set of parabolas, it can definitely cause a cardiac arrest in a yak, to paraphrase Woody Allen, a writer in the late 20th century. The writer of the film "What's New, Pussycat? Take the Money and Run", is also famously known to have said, "I don't know the question, but sex is definitely the answer".

However, the method any sexually hungry man may use to pursue this hedonistic "answer" is capable of landing him in trouble. That's why Robert Frost maintained that "A mother uses twenty years to make a man of her boy, and another woman uses twenty minutes (perhaps fifty-three minutes documentary) to make a fool of him."

Say what you like, men are naturally created to be moved by what they see. And certainly, almost 99.9% of these wonderful creatures of God have their brains relocated and resettled in between their thighs at the sight of certain "vital parts" of the opposite sex. Unfortunately, the female counterparts in the 21st century know this secret of man. Consequently, women have learnt to dress, walk, sit, talk, and even how to look, especially, at men. That's the tragedy of the 21st century man.

At KNUST campus here, even though this West African intellectual giant is usually eulogized as Kwame Nkrumah University of "Spiritual Training" instead of Science and Technology, in commending the level of decency among the university's female students majority whom are prayer warriors, sometimes a lady's makeup alone make you go gaga let alone seeing those "forbidden and sacred territories" in her body. As a matter of fact, some of us male students sometimes wear more than one supporters or boxer shorts in order to prevent the eventuality of having to control and tame the unfortunate erection of your "sausage" in public mostly in classrooms.

I recall when we first came to this corner of West Africa's Temple of Knowledge (KNUST) in 2015-2016 academic year. We used to asked one another after lectures how many "rounds" (of sex defined by the number of times one ejaculates during the act) today. Because, sometimes before you realized you have ejaculated already. A female student can give you a catwalk alone to disarm you religiously and faithfully. Walahi.

Some of their angelic moves and dressing, as if they are being walked down the aisle, have the proclivity of making you as a male student walk in cloud nine!

Fellow Ghanaians, the male lecturers are not bunch of "firewood". Walahi. Their "Bodies no be firewood" to borrow that cliché in recent times. They are human beings and just any other man who are also very prone to temptations of any kind, especially, the biggest temptation of the tempter of man: the woman.

So, just as students put in titanic struggles to cope with the sexual tension being deliberately pumped up by the provocative style of dressing by the university female student, male lecturers are equally suffering and struggling.

Truth be told, majority of female students are experts in seducing both lecturers and students on campus, mostly, in classrooms. A lady will sit in a particular way that reveals her underpants in class, and the strangeness of the color of the pant alone will not only brainwash your definitions memorized over the semesters, but it transports you completely to nirvana.

Fellow Ghanaians, let's be fair, how many men can allow such a temptation to go?

As a male lecturer whose wife is even away for sometime or even around, if you find this underpants color not only fascinating but "smelling good", and you have the power to "taste" the sweetness of what's behind or in this underpants in your capacity as the examiner of this very beautiful young lady, what amount of faith or self-discipline can prevent you from accepting such an invitation?

Listening to Prof. Ransford Gyampo on PointBlank on Eyewitness news, the intellectual role model of the youth of Ghana painted a vivid picture how the said temptress who later to become an undercover journalist, popped out her breasts to "torment" him. A seductive move that perhaps, excited, impressed, seduced, and salivated the nation's outspoken political scientist. And like the biblical Adam, the political science Professor had to find a way of eating the "Apples" displayed.

But you see, if the lessons of history teach us anything it is that nobody learns the lessons that history teaches us they say. How many people have sex scandals brought to their knees? The case of the Father of the entire mankind (Adam) should have been enough for mankind to guard against this temptation. But victims of sexual scandals who have through toil navigated their ways to the top, find themselves brought back to the bottom again due to their inability to zip up at the wrong places.

Should we continue this rigmarole of having our brightening starts and the most accomplished in our society to be bamboozled into condemnation of mess by sexual harassments they appear so weak to avoid? Beyond the dormant and unworkable and unenforceable laws, what can we put in place in order to tone down sexual harassment and its embarrassing effects on well meaning Ghanaians who have been led into it by hedonism? Is there a way we can at least douse the sexual tension pumped up by the wardrobe malfunction of some of our female students in tertiary institutions and wherever, again, this menace exists?

It is often said that the problem with the typical African is that, he cries over consequences and laugh over actions. As as a result, this wonderful race of the Africa have really used over a century fixing problems instead of concentrating on building Africa. It is a sobering epiphany to say the least.

Sexual harassment is not only peculiar among university professors, it cuts across virtually all departments of our social milieu. Bosses of companies harass their female subordinates sexually; Men of God, both genuine and counterfeit ones as sharers of the message of God are the worst partners in this social pathology, including government officials, especially, ministers and MPs. I do not begrudge them much. Anybody in their position may do worse. But what are we doing to minimize this menace beyond our impotent laws and dysfunctional disciplinary committees constituted in our tertiary institutions?

The truth is, we can't engage in one way fight against sexual harassment. It is a phenomenon of two way traffic. If men don't see, they won't harass. Period. Therefore, inasmuch as we emphasize and encourage male lecturers and men in general who have unstable libidos to work on themselves, it is equally paramount to ask women to "hide" what drives men crazy in women.

That's why in Islam, Allah commands the women in Quran 33:59 to cover up their bodies, and commands men in Quran 24:30 to lower their gaze. I believe the Gospel must say same.

Some tertiary schools like the Ghana School of Law, Ghana Institute of Journalism, Islamic University College, including many others I am not aware of have regulated the wardrobe of their students especially, the female students. Why can't we replicate same in other tertiary schools in Ghana as one of the ways of fighting the menace of sexual harassment?

And for me, not only in tertiary institutions should this regulation be taken, in the corporate arena, too, let's regulate and determine what the females should put on decently so as to avoid unnecessary causation of "sexual cardiac arrest" among male workers or lecturers because men must see to walk and work.

Until, we consider what the female students wear on campus, let nobody contemplate about fighting sexual harassment effectively. Because, men are at their lowest ebb having seduced by women.

In fact, I once read somewhere that, if a man is aroused sexually any "hole" is enough for him irrespective of the size the "hole" (tenderness, small or large). What we must understand is that, for some seduced men, they must utilize sex temptation no matter the prison sentence they will serve. It's a matter of priority.

May God help Prof. Gyampo and his colleagues. It was not their fault, our promiscuous environment caused it.

Galamsey fight: Godfathers have disowned their child but wil...
1 hour ago