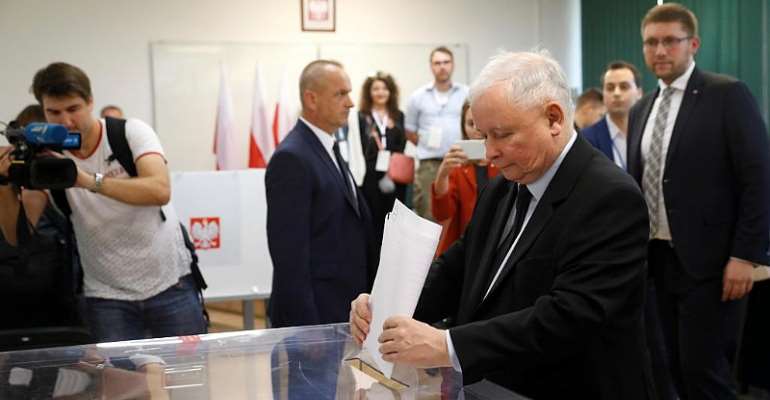 Poland's governing right-wing Law and Justice Party has won parliamentary elections with over 44 percent of the votes. Voters were attracted by an increase in welfare payments, and the party's stance against LGBT rights and immigration.

The triumph by the Law and Justice Party (PiS) followed a campaign focused on a raft of new welfare measures, coupled with attacks on LGBT rights and Western values.

"We have four years of hard work ahead. Poland must change more and it must change for the better," said PiS party leader Jaroslaw Kaczynski after an exit poll showed him winning with an expanded majority.

His party controlled 239 of the 460 seats in the out-going parliament. Near full official results provided by the state elections commission on Monday did not provide a seat count.

Condemning the PiS's anti-LGBT drive and close church ties, but sharing its welfare goals, the left returned to parliament after a four-year gap.

A far-right libertarian party, known for its anti-EU views, also made it over the five percent threshold to enter parliament.

“This was a very unequal campaign,” Marcin Swiecicki, member of parliament for the Civic Platform, told RFI.

PiS could win because it controls the state-run-media, he says. In the countryside, “most of the people just watch public TV,” and the state propaganda “really worked.”

But over its four years in office, Kaczynski's PiS also coupled allowance, tax breaks for low-income earners and hikes to pensions and the minimum wage, creating sympathy with poorer voters in rural areas and small cities.

Welfare state
His party's bid to build a welfare state appeals to Poles who felt left behind amid the explosive growth and unfettered free-market drive after communism fell in 1989.

A last minute attempt by winner of the Nobel Prize for Literature Olga Tokarczuk, who spoke out against the PiS, telling the “people in Poland, let's vote in a right way for democracy,” did not have much effect.

“I think that she was not so widely known in Poland, and her voice worked only for people who had already decided to vote for the opposition parties. I would not over-value her impact on the election result.

Kaczynski is among several populist leaders in the European Union seeking greater national sovereignty over the federalism championed by France and Germany, and the PiS government drew fierce criticism from Brussels after introducing legislation that curtailed the independence of courts. A controversial media law, that was to grant new surveillance powers and allow the government to access digital data was also heavily criticised.

And there's more to come.
“One campaign pledge of Kaczyński was that now the PiS government will try and take over the lower courts by changing those judges that are somehow not with them,” says Swiecicki.

“So we need a very strong input by the European Court of Justice and the European Commission, because our own Constitutional Court is already controlled by Warsaw.”

Just three days before the elections, the European commission announced it was referring Poland to the European Court of Justice over its disciplinary regime for Polish judges.

No “Pexit?”
The PiS government may reject EU criticism, but the stand-off does not risk Brexit-like sentiments emerging any time soon, says Swiecicki.

“The EU is very popular in Poland,” he says.
“It enjoys about the highest level of popularity among EU member states with about 90 percent approval rate. But they will try to weaken the EU, despise the European Parliament, contest the European tribunals, arguing that they should not interfere in internal judiciary.

“They would prefer to look at the EU as an inter-governmental organisation. But they will certainly not propose a withdrawal from the union,” he says.