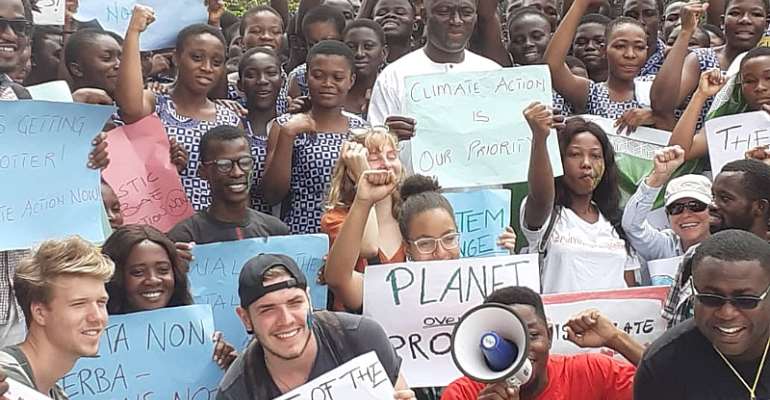 Over 7 million people turn up worldwide from 20th -27th September to protest against the inaction of global leaders to find a lasting solution to combat the increasing rate of climate change and its adverse effect. The movement which was motivated by Swedish climate activist Greta Thunberg about a year ago encourages school children to leave their classrooms on Fridays to demand for climate action as part of efforts to pressure world leaders into action.

The momentum of climate activism in Ghana is growing as more young people are becoming aware of the devastating impact of climate change on their daily lives. With the recent unpredictability of the rainfall pattern in Ghana, and it adverse impact on agriculture, the rising sea leve, influx of pests and increase in temperature with it associated socio-economic challenges, many young people are mobilising to have a collective voice to demand government and leaders to take proactive steps to mitigate and adapt to the changing climate.

Friday For Future activities in Ghana

In Ghana, several CSOs and young people collaborated for the first time to participate in the global climate strike termed Friday for Future. Starting on the 20th of September, the Young Reporters on Environment (YRE) in collaboration with Action Aid Ghana, and members of the SD Goal 13 platform, which is hosted by KASA Initiative Ghana, organised a climate strike march to petition the Mayor of Accra and the Minister for Environment, Science, Technology And Innovation. In the petition which was read by Miss Ellen Awuku, the coordinator for YRE, the group demanded that government commits more to the implementation of the national Climate adaptation policy and commit more resources and investment towards achieving 10% energy mix being renewable based on government’s own objective. She called on the youth to add their voice to the call for climate action from the government and climate justice both locally and globally. In total, about 300 students from second cycle institutions in Ghana took part in the march.

The Strategic Youth Network for Development (SYND) also embarked on a social media campaign, to sensitize people on how human activities contribute to climate change, the facts about the current status of climate change, some mitigation and adaptation tips for government and individuals among other things. The aim of the activity according to Mr. Chibeze Ezekiel was to ensure that young people who are active online are not left behind in the conversation of climate change.

The Ghana march for climate initiative which was spearheaded by Arocha Ghana in collaboration with the Ghana Youth Environmental Movement, Green Youth Alliance and KASA Initiative Ghana organized three zonal marches across the country. In the Northern Zone, the march was held in the Savannah Regional capital, Damango. In the Middle Zone, the march was held in Kumasi, with the southern zone march being held in Accra. The Deputy Director for Arocha Ghana stated that they were motivated to mobilise the youth across the country because “climate action is at the heart of the future of the present generations and posterity and that is “why we are committed to providing a platform for the youth to engage in the climate discourse”. The Deputy Director for Arocha Ghana also stated that he is expectant that, “government will work towards progressively achieving the Nationally Determined Contributions (NDCs) with alacrity. He further stressed that the lack of data and financial resources shouldn't be a limitation. He emphasised the need for government to “enact and implement positive policies that will secure our natural climate, such as the forest reserves which constitute an important factor for socio-economic development”.

Protesters at the march in Damango called on government to protect their Shea trees from being cut down for firewood. They further called on the Yabon Wura, the Paramount Chief of the Region to intercede on their behalf to get government to find sustainable solutions to address climate change.

In Kumasi, the mayor of the city joined protesters to plants about 1000 trees to signify his commitment to re-greening the once garden city of Ghana.

350 Ghana Reducing our Carbon also embarked on a school sensitization campaign and held funfair in Obuasi to educate young children on climate change as future advocates and most vulnerable group affected by the impact of climate change.