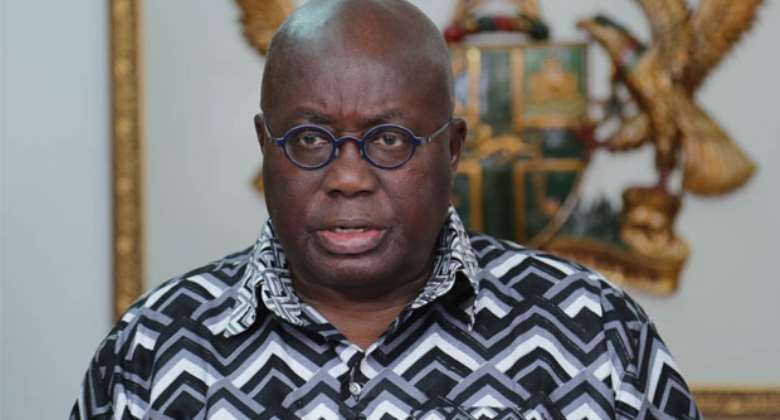 President of the Republic of Ghana, Nana Akufo Addo has earned himself an unenviable title; the Clearing Agent General [CAG] as a result of his penchant to absolve himself and his corrupt appointees from the countless scandals and corruption cases engulfing them.

The pretentious posture and non-commitment to fight corruption and fulfil other promises such as 1Village 1Dam, 1D1F etc made him become a butt of jokes; the latest being a viral video at the graduating ceremony of Police Officers.

“1Village 1Dam, Nana nie, Mr Lomotey nie….,” 2 female voices shouted amidst laughter in the background of the viral video and jeered the President as he frowned during the parade.

It is explained that “Mr Lomotey” was a pioneer and popular clearing agent at the Tema Port and to have President Akufo Addo taken over his job, in this case clearing his appointees of any wrong-doing earned him, “Mr Lomotey,” the Clearing Agent General.

I am told Nana Akufo Addo is never enthused when referred to as the Clearing Agent General or the Corrupt Clearing Agent. But trust me, he is what he is. He should brace up.

Even though they themselves are yet to demonstrate what it means to be competent, Nana Akufo Addo and his clueless but overhyped economist, Dr Mohammadu Bawumia in 2016 consistently called President John Mahama and his government incompetent without anyone raising a figure and so why will Akufo Addo expect anyone to spare him and his ‘tibonko government’ “duidui collection” a tag that appropriately fits?

He must demonstrate to Ghanaians that he is not the Clearing Agent General by punishing himself and his looting brigade in the numerous corruption cases.

As for his speech at the 2019 Bar Conference in Takoradi, it was just a waste of everybody’s time; disgracing us and lawyers. Why? Everyone knows corruption is rife in Ghana and for him to refuse to be candid with Ghanaians on the matter, outlining concrete measure to deal with the menace speaks to his true commitment to the fight.

Nana Akufo Addo claimed he has not come into public life to enrich himself, yet his friend and financier, Kwesi Nyantakyi says he, Nana Addo sold family assets for campaign and had become badly indebted and therefore got his blood brother, Bumpty in-charge of demanding 5% sum of every Government of Ghana contract to clear his indebtedness. How about that?

Now, at the time Mr President was saying it is not his job to clear, he knew deep down his heart that he is the Clearing Agent General just as Felix Kwakye Ofosu has said “Akufo Addo is not fighting corruption, corruption is fighting him.”

When the Bost-Movenpiina-Zup Oil contaminated oil scandal broke, BOST CEO, Alfred Obeng confessed on Atinka Fm that Movenpiina didn’t tender for the contract and that he as CEO just called the company to pick up the product, an act which in itself offends our public procurement laws and warrants his sacking and prosecution. Did it happen?

National Petroleum Authority [NPA] CEO, Hassan Tampuli stated publicly that Movenpiina and Zup Oil were unlicensed to operate for which it promised to take legal action against the 2 firms. Did it happen?

The then Energy Minister, Boakye Agyaako moved to have an 8-member Ministerial Committee to investigate the controversial sale of the contaminated fuel, the Committee never got to work. We later learnt it was Presidential order to halt the investigation.

The last time we heard about the BOST scandal, it was President Akufo Addo who had cleared the CEO of any wrong-doing when we knew there were procurement irregularities and the fact that the companies were not licenced by NPA. Incorruptible Akufo Addo??

The same clearing agent job of our President more than manifested itself again at the ‘Cash4Seat’ Parliamentary Committee probe. Before the Committee completed its work, the President cleared his appointees involved, describing the issues being investigated as bogus, forcing the ‘Cash4Seat’ Committee to present a report that will fit the President’s description.

The Australia Visa scandal is another case in point where a former Director General of National Sports Authority [NSA], Robert Sarfo Mensah had confessed that he and the Board Chairman, Kwadwo Baah Agyemang caused fraudulent names to be added to the Australia games list but have been cleared with a dubious Police CID report just as Pius Hadzide who had been implicated of including fraudulent names as guests in Australia.

It is not contestable that Nana Akufo Addo was the mastermind as opposition leader when NPP’s 1st NPP’s Vice Chairman, Freddie Blay and the party treasurer, Abankwa Yeboah had in clear breaches of the Political Parties Act activated a dormant bank account and operated it without the knowledge of the party’s National Chairman and General Secretary. When the criminal act was reported to the Police for investigation, Freddie Blay with the backing of candidate Akufo Addo became lawless; refusing to cooperate with the Police on the matter.

Baah Acheamfour who lodged the case with the Police became an endangered being. Hired criminal elements looked everywhere for him to “kyre no bribi kakra,” the Atiwa way. At this point, it is the memory of Atluk, Nana Yaw Appenteng and others that filled my mind. Very strong and able bodied NPP guys but are today disabled, they were physically attacked, badly deformed just because they don’t support Nana Akufo Addo.

While at that, it is important to point out that the Sole Commissioner, Justice Yaw Apau who investigated Judgement Debt matters indicted Nana Akufo Addo for causing financial loss to the state through a dubious, cheap disposal of Ghana’s durable Drillship.

It is obvious Nana Akufo Addo’s name, body and everything is mired in graft, not only corruption. Now, anytime he attempts his rhetoric about the fight on corruption, we will have to remind him of our General Secretary’s admonition that “flowery speeches and empty rhetoric delivered in acquired accent doesn’t fight corruption.”