A Market Day In Bolga: The 80s 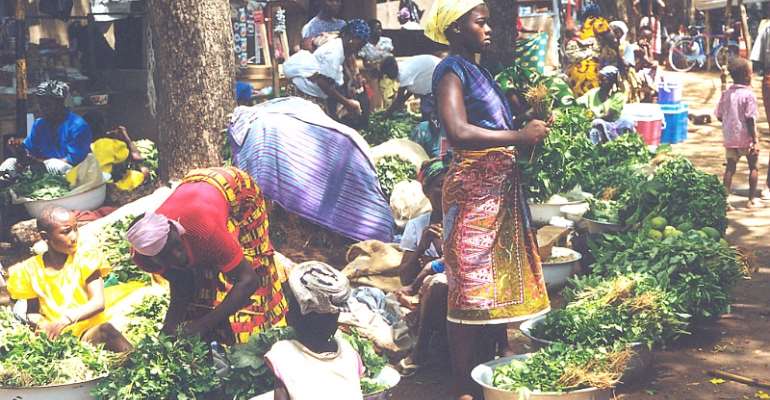 So it will be around 5:00am or earlier when the main roads to Bolga Central ( Wunku-o, Yikine ,Zuo-rungo, SOE, and Zaare ) will attract human and bicycular traffic from persons bringing in wares and more from the hinterlands. The "hinterlanders" will bring in birds, grains, fruits, spices, butter and any associated with rural environs. This was sold at prices considered very cheap by town standards especially if one had the discipline to wake up early enough to catch the traders on the way before they got to the market. That usually was easier because rural folks (not all) would settle for quick cash to enjoy pito (locally brewed beer).

Children loved those days and usually would sound hints that rural folks were passing with goods. 'Atiah toe yoore', children will shout at the sight of a rural folk passing with a fowl, goats, fruits or nothing. They were easy to identify because of their favourite foot wear Nick named Atiah toe yoore. Atiah toe yoore was a particular brand of bathroom slippers. I recall the brand was bluebird. Cognizant that it was not to be worn in public, town folks would mock rural fellas who would wear such prestigiously for all occasions including market days which was also special. Children in those days, me not an exception found this amusing and would wake up earlier in order to mock rural traders coming in with their stuff to sell. Many got angry, others were not bothered. This looks like a digression from the storyline! no it's part of the market day narrative but enough of it.

The highs of the market day in Bolga those days were the evenings and dawns of the day after. Rural folks usually would have made enough money to warrant rewarding themselves with pito. Most would have the beer in excess leading to different behaviour. The very common one was fight. Usually market days would see demonstrations of physical strengths. Weapon fights were not common but a major character of the fights of those days was, one would not ask but help his brother or townsman in a fight, only to ask what caused the fight after there is calm. Alas, people fought for reasons they get to know after the fight. It was fashionable to be a strong man in those days.

Fighting was not the only act attributed to alcoholism on market days. Folks would also pull their bicycles from Bolga to their villages. Why? They were so drunk to ride. This came with the attendant casualties of being knocked down by cars, motorbikes or other bicycles.

In the drunken state, others would not manage to get to their destinations before day break - you would find them lying on the boarders of the streets at dawn while going to school, work, church or nowhere.

But there were the fun times for rural traders too. Those who would rather prefer to buy kulikuli with their transport fares and walk home. Kulikuli was/ is a snack made of extracts of groundnut paste, salted and fried in groundnut oil. It took different shapes but the most popular was circular and resonated very much with the rural folks. It was cheap and rural traders loved it.