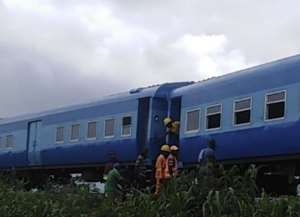 As part of measures to reduce rail accidents in the county, some passengers are calling on Management of the Ghana Railway Authority to clamp down on its trains noted for overloading.

According to them, this when checked will help the Authority identify the number of casualties whenever trains derail from its tracks.

Samuel Obeng, a passenger at Nsawam said "Management must take a cue from what happened in October last year. Since the train conveyed the exact number of passengers, it was easy for Authorities to identify and Government gave support by paying compensations to bereaved families."

He spoke exclusively to ModernGhana on the sidelines of the Ghana Railway Authority's test-drive organised to test the fitness level of its coaches from Accra to Nsawam on Thursday.

However, the seemingly smooth journey came to a halt at Chinto, a suburb of Accra after the train developed a minor derailment on its track.

Addressing the media on the challenge, an Official with the Railway Authority, Comfort Awunya said "This is a minor derailment. There are engineers on the ground working on it. These things do happen most times."

She however disclosed that since issues of derailment happens often thus the Authority's idea of test-driving the train.

After an hour, the engineers managed to reposition the derailed tyre on the track making the train continue its journey.

The test-drive brought together some officials of the Authority as well as some selected Journalists.

Beginning its operations in 1898 under the Gold Coast Civil Service with headquarters in Sekondi, the headquarters were transferred to Takoradi after the building of Takoradi Harbour, and railways and ports were jointly administered as the Ghana Railway & Ports Authority. In 1976, SMCD 95 separated the railway from ports as the Ghana Railway Corporation. The company enjoyed the status of a public corporation until 19 March 2001, when it became a limited liability company.

The original 304-kilometre (189 mi) Eastern Railway was built in 1923 by the British for the purpose of hauling minerals and cocoa. Construction of the Ghana Railways started before there were any port facilities, and locomotives and other equipment had to be lightered over the beach.