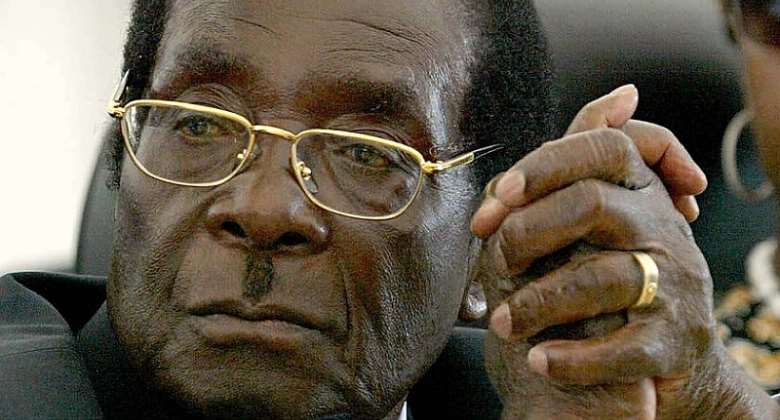 Comrade, Soldier, Mentor, Robert Gabriel Mugabe, rest in perfect Peace.
At 95, we still needed you. But who can begrudge the heavens that bless our land with your type?

Take the lead, prepare the better place for our coming to you on the pantheon.

Carry from us our regards to the saints that will welcome you on the holy mountain.
Tell Kwame Nkrumah that Ghanaians miss him, and now regret it why we chased him out to die a miserable one in another man's land.
Today, his Ghana is a pale shadow of its beautiful past.

Tell Nelson Mandela that the rainbow nation he envisaged for South Africans has now turned into a slaughter house, where the hopelessness of the youth today makes them butcher their own brethren from Africa, those they think are stealing from them what they deserve. But fear to attack the Boer that still imprisons and enslaves them.

Great soldier, my in-law, tell Thomas Sankara, Col. Gaddafi, that the Paradise in Africa they started creating has been given back to the lions and the eagles, and the land is now a forest where hunting for the small animals is not strained.

Tell them that siphoning of the betters from our beautiful and blessed African soil knows no bounds.
Libya is now desolate.

Burkina Faso is a battle ground.

Fare thee well Bob, you were a warrior. Your name is etched in gold, and would never get erased from the annals of Africa and world history.

You shot the lion, the lion was wounded by your bullet. But those for whom you shot the preying lion fought an internal war, deciding who should eat the head, and the tail of the lion.

Their fight resulted in them slaying themselves.
The already wounded lion, who just needed some food to revive, crept and ate the fallen greedy combatants. The lion got better and stronger, and now he preys on the innocent, the poor, the vulnerable.

In your stead, our cedar, our iroko, our odum, our mahogany, the not fancied kwaebofr3 (hollow shrub), has been planted.

He promised milk and Honey, but it was to milking us dry.

Can we have again a brave warrior that will ever face the lion?

Oh Africa, can we ever have again a hunter whose pellet reaches the high soaring eagle who frightens and swoop on our chickens?
We've allowed ourselves to be stolen of our brave ones,our wise men.

Those of us who bought into your philosophy will continue what you left undone, Uncle Bob, our great warrior.

We'll erect again the fallen walls of Africa, and make it great again.

In our hearts we'll build your statues, and immortalise your ideas.
The revolution you started and waged, the ones for which you were pilloried, impaled, hounded and disgraced, would see a revival.
And in yonder, by the fire you sit on the pantheon, warriors, you'll admire our boldness, and the swiftness with which we'll approach and defeat the enemy that devoured you✊🏾

‘Akonta Mining Ltd has no lease to mine in Tano Nimiri Fores...
37 minutes ago

BoG was ordered to kill Heritage Bank on political grounds t...
40 minutes ago