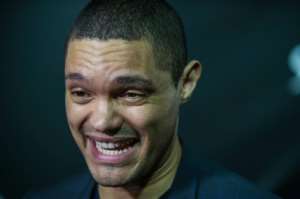 That's all, Trevor Noah.
You don't just make us happy on your American most watched comedy show, *TONIGHT*.

You've spoken as a well fed and learned guy. And a brilliant guy from South Africa.

But like you ended it, " *That's all*".......
Yeah, that's all.
Who needs this backlash of yours, Trevor?
Whose duty it is to tell the uneducated South African who sits by the riverside and is forced by the power that be, the nominal elected leaders who are puppets of the apartheid government to "wash his hands with spittle"?

Who has been given the voice to sound it loud in their ears that: "black migrants in South Africa do not even control 0.1% of the country's economy" (Sic) as you said. And for that matter attacking black businesses is a misplaced anger?

South Africans are angered by their present and past Presidents, the elected leaders. Trevor, as one who reported from South Africa before your current takeover at the *Tonight* show as the main boss behind the comedy desk, you're definitely not a stranger to this.

The parents of today's generation laid down their lives and fought the whiteman till Mandela walked out of jail, and the country was declared a republic to the indigenous South Africans, with the rights to franchise.

Today, those leaders whose hands they encrusted the future of the struggle have reneged on their promises.

The average South African sees himself as hopeless.

Because he all the time wonder why his country is bequeathed with such abundant resources, but hardly makes ends meet. He wonders why his mother and father faced the whiteman's bullet to let him have better opportunities but now gets not good accommodation and three-square-meal a day.

He cannot attack the elite whiteman who controls more than 85% of the country's economy, for he does so at the peril of his life.

It's a shame to African leaders, my country Ghana not excluded, for selling our birthright, our wealth, our country back to the whiteman from whose hands we just fought for our freedom.

Youth of Africa, comrades in South Africa, let no one discourage you that you have no course for fighting. You do. Your swords are even blunt now. They are not the best weapons you're to wield for this fate decider battle. I'll prescribe the best weapon, the impregnable arsenals, as we progress.

But, cautiously, don't attack the also struggling black migrant. The Ghanaian, the Zimbabwean, the Mozambique...... who is running away from misery and poverty to skim water out of stone in your country, a place he see better chances than his home country.

Attack not your fellow African who also finds himself in the same hopeless situation you're fried and defied, when he goes to where he'd ran away from.

Look, we have no caring elected leaders today in the African soil, safe the one rising in Rwanda, Paul Kagame, "the new Kwame Nkrumah and Col. Gaddafi of Africa".

The rest are there for their myopic personal parochial interest.

Those misleaders, the stomach-directed politicians, they are the very ones you're to attack.

Use no weapons, they don't kill as faster as the tongue. They pierce not deeper than the pointed end of the pen. Yes, weapons don't sail through rough waters than the human soul, the strugglers' soul.

Let's march towards them. Let's attack them from all fronts. We have behind us the wailing spirits of Kwame Nkrumah, Nelson Mandela, Thomas Sankara, Col. Gaddafi and the other good souls that fought for the good of the African, and paid with the precious life.

These tactics we'll employ
Our movies depicting dying kids in the streets because of poverty and curable diseases will accost them from the front, if they get eyes to see that, it'll either blind them or enlightens them.

From their behind, cries of the widows whose husbands were gunned down by the mine owner, the landowner, because he demanded his due will assail them. If they don't fall prostrate, they'll feel the push and remind themselves of their supposed sacred oaths.

From the ground, on the soil they stand, our forebears who well pilloried and cut open for their blood to gush out, and dogs feasting on their meat, will let them shiver. If they don't run to the physician for treatment, they will know the sacred land on which they stand is reminding them of where they should direct their paths - visiting the sick.

If none of our tactics carries the day, this last one will.

They will pray to the heavens to let them sink dead. But from there, the saints on the pantheon, the good spirits that weeps for the hopeless and the already dying African will hit them in the head. Their destroyed brains would be our victory, thrusting us to the place of royalty, where we'll build what they wickedly failed to build.

Armed we go. We're taking over.
Trevor Noah, we leave you not behind. If where you sit today does not only make you: "the guy whose palm kernels were cracked for him by benevolent spirit, and turns to laugh at the man without teeth, the one without hands", join our march, our *REVOLUTION*✊🏾