If Dr Bawumia Has Any Clue, Should Direct It At Fixing Their Own Mess!!! 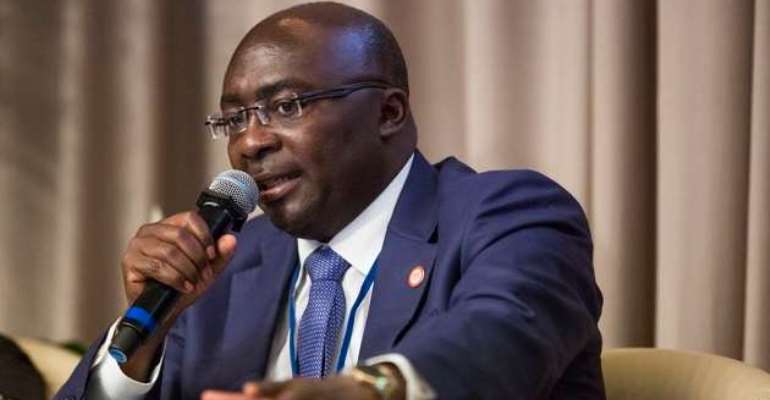 At a time that the Akufo Addo/Dr Bawumia regime is grappling with the smelly PDS scandal, Vice President, Dr Mohammadu Bawumia emerged from a hide-out known to only him and sought to throw a challenge to H.E. John Mahama on free SHS.

I have said it was a feeble challenge which didn’t even require our flagbearer’s response since it is only to divert attention from the biting PDS scandal, insecurity, unemployment, hardship among other issues that the scandal-ridden Akufo Addo-led government is reeling under.

To be honest, but for Dr Bawumia’s voice, I would not have made him out as the one speaking. From the video in circulation, it all looked a vainly agitated Jalabia-wearing Aflao border black-market-money-dealer who was speaking into microphones, while at it, swung his head innumerably.

Realising he was the one, I paused to ask myself where he had emerged from? There is a rift at the Presidency for which his visibility lately appears curtailed. His sudden emergence and the distraught look on his face as he spoke into the microphones were enough to tell he might have been unleashed.

In between time, the numerous 2016 NPP promises jumped to mind. Ghanaians were promised a rare kind of a Vice President, one who has a magic wand to Ghana’s economic challenges.

The claim in opposition as I vividly recalled was that Dr Bawumia is an economic Messiah. President Akufo Addo, infact at the NPP’s last rally at the Ayawaso West Wuogon bye-election repeated it that God has granted his Vice all the worldly economic knowledge to solve the country’s problems.

And so, if Dr Bawumia has any clue, should direct it at fixing the stinking mess the government is.

It has been almost three [3] years in government and as head of the economic management team, nothing depicting the status of an economic guru he has yet proven.

Since his status as a Vice President, he is either an ICT guru or drone expert or pretending to be a pharmacist; as these are the areas he is focused on as the economy [including unfulfilled fiscal deficit targets] which we were told is his expert area keep worsening.

Vindictiveness; targeting for collapse banks owned by persons perceived as political opponents and a claimed reform program resulting in the collapse of about 420 financial institutions, that directly affecting about 20,000 Ghanaians through job losses, leaving the economy in a mess.

Still on job losses, a UNDP report had indicated that about one million Ghanaians lost their jobs due to the collapse of the legitimate small-scale mining.

Others include declining capital investment; dropping from 2.1% to 1.6% - accounting for the poor infrastructure base of our economy, increasing cases of Non-Performing Loans [NPLs] of Banks, underperforming Agricultural sector, unemployment etc.

As if that is not enough, Dr Bawumia in 2016 said Ghanaians could not feel single digit inflation in the market as well as in their pockets and that prices of goods were increasing in the face of the success. Almost three years into an Akufo Addo/Dr Bawumia government, single digit inflation is being touted as an achievement without it reflecting in the people’s pockets as prices of goods skyrocket.

Also, the current regime’s penchant for excessive loans had forced the World Bank to in a recent report warn of our new status as “high risk debt distress country.” Meanwhile, it is a political party that promised in 2016 never to borrow and that the resources to develop abound here in Ghana but got power and are borrowing senselessly and have nothing to show for the loans.

Dr Bawumia, if you have any clue, cut the long but needless talk and practicalize the content of your opposition lectures by making better the economy for the poor and struggling Ghanaian.