Whether Founder's Or Founders' Day; Man Will Not Stay In Power Forever 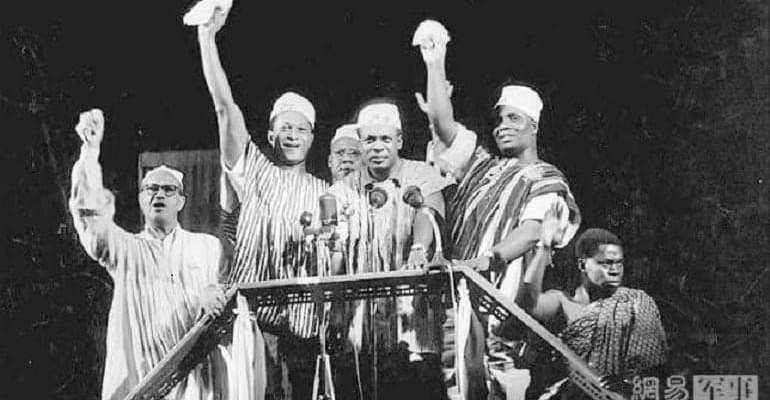 Fellow Ghanaians, in the timeless and immortal words of Francois-Marie Arouet popularly known as Voltaire: "it is dangerous to be right when the government is wrong."

According to Robert Frost "the brain is an interesting organ. It functions when you wake up in the morning but ceases to function immediately you enter your office". For me, not only in office, it ceases functioning even in government!

A clinical appraisal of the current clannish government of President Akufo Addo suggests, there's no scintilla of doubt, that that gathering of angels' party has so soon reached "ETC" (End of Thinking Capacity) in government.

How sad!
Our elders say a pot retailer is not in business. Likewise a party that came to power on the back of mouthwatering campaign promises. It is not the fault of such a government. According to Shakespeare "the fault does not lie in our 'stars' but in ourselves."

And in the most powerful words of Dr. Martin Luther King Jr.: "we shall overcome because the arc of the moral universe is long but it bends toward justice." Ghana shall overcome. Ghana shall be free from the icy and incompetent hands of president Akufo Addo.

In a speech on valentine's day 1965, what is today known in Malcolm X-ism scholarship cycles as the "Malcolm-Xian logic" was unveiled by Malcom X as a way to counter the Ku Klux Klan (White Supremacists of USA).

These nigro-phobic group of white Americans intimidated and tormented the black people in America. So Malcolm X told a crowd of black people on 14th February 1965 that they had to employ the "language of the enemy" to be able to defeat him. According to Malcolm X, if a man is speaking in Chinese, you can't come to common terms with him when you are speaking in German. Hence, the Ku Klux Klan members being violent toward blacks could only be contained by "speaking their language" of violence by unleashing retaliatory violence on them (the Ku Klux Klan members) as well.

To Malcolm X, if a man is violent you don't approach him in peace. This priceless logic seems to have been the case in every given situation. President Akufo Addo obviously didn't "speak the language" of the country's greatest enemy of chronic poverty and hunger growing up. Let's understand.

You see, majority fail to realize when the gods wish to punish us they answer our prayers according to Oscar Wilde, and probably, it was a punishment from the God of Ghana for lack of appreciation by Ghanaians to Him when He decided to entrust our wellbeing in the hands of an individual whose experience of "suffering" was just boarding a taxi back home from school when his driver couldn't make it. That was the only form of "Wahala" our dear president went through in a society octopus of hardship and naked poverty and hunger is a household name. How do we expect him to clean the mess of our forebears who messed up Ghana because of their children Wahala-free life?

No wonder when president Akufo Addo wanted to experience the sufferings Ghanaians go through he boarded taxi. Because riding in taxi to school once was the day he suffered.

Why won't president Akufo Addo be governing this country as if he is a president for cosmetic reasons in this country such as building of Cathedral, and subsidizing history through arm-twisting of justice and negotiation of truth to revise the history Ghana?

On February 3 1959, Dr. Kwame Nkrumah visited the Eastern House of Assembly at Enugu. This was what Nnamdi Azikiwe, the governor general of the federation of Nigeria had to say: "We sincerely appreciate this visit and we welcome to this House, with hearts overflowing with joy, Dr. the Honourable Kwame Nkrumah and his galaxy of patriots. It is a very special pleasure to us, because Dr. Nkrumah is not MERELY the Prime Minister of Ghana, but is an OUTSTANDING pioneer in the fight for the freedom of a sister nation in West Africa."

Those were the immortal words of Dr. Nnamdi Azikiwe, the governor general of the Nigerian federation.

There's no doubt the August 4th has historical basis in the annals of our history. But it is not related to founding of Ghana. Maybe it does relate to the birthday of the president's uncle.

Those who argue August 4 does have something to do with our foundation as a country only refer to the formation of the Aborigines Rights Protection Society in August 4, 1897 that was led by John Mensah sabah against the Land's Bill; and the other reason cited is the foundation of the United Gold Coast Convention on August 4, 1947,that until the arrival of Dr. Kwame Nkrumah, had a rickety foundation.

It is true that the UGCC invited Dr. Kwame Nkrumah to help in the nationalist struggle in 1948 at a cost of hundred pounds that was paid by Paa Grant, the chairman of UGCC.

In the first place, if John Mensah Sabah who led the Aborigines Rights Protection Society (ARPS) in 1897 is to be crowned founding fathership of Ghana, and because the ARPS was founded on August 4, I think it's fair to include the chiefs who partook in the Bond of 1844 as founding fathers. Because, the struggle started on the arrival of Commander Hill, and the chiefs did have a better deal with the British for the peace and stability of the then Gold Coast.

Again, the 1897 Aborigines Rights Protection movement led by John Mensah Sabah, was not an immediate fight for independence, it was about the Land's bill.

In the second place, members of the United Gold Coast Convention, UGCC, should not be counted members of founding fathers of modern Ghana and post Convention People's Party, CPP. Because, left to these group of people (William Ofori-Atta, Obetsebi Lamptey, Ernest Ako Adjei, Edward Akufo-Addo, and Dr. Joseph Boakye Danquah) who were obviously uncertain in respect of Ghana's Independence, Ghana could have still been under British colonial rule up till now. And as history has it, when Nkrumah left the UGCC in 1949 to form the CPP, both the former and the latter political parties had their ideological incubators. Whilst the UGCC believed in "self government within the shortest possible time", the Nkrumah led CPP believed in "self government now".

As a result, Nkrumah was not only fighting the colonial masters for Ghana's Independence, he had to safeguard himself against "inside" attacks for his believe in self government immediately. What led to the Kulungugu bomb attack on Dr. Kwame Nkrumah in 1962?

When Dr. Nkrumah broke away from the UGCC their paths separated and Nkrumah became the object of hatred of the UGCC.

And that was a clear evidence the UGCC had lost interest in the vanguard of Ghana's Independence struggle because they constantly served as barricades to Nkrumah's efforts to realize his "self government now" that the UGCC didn't believe in. At least, not at the time Dr. Kwame Nkrumah applied himself to that sacred course fighting tooth-and-nail to liberate Ghana from the manacles and bondage of British imperialism. And he must be credited as the only founding father of modern Ghana.

The members of the UGCC were clearly not more part of the struggle due to the ideological differences, and it took the indomitableness of Dr. Kwame Nkrumah to fight on till the battle was won. Of course, they were others who supported him, but since Dr. Nkrumah was the live wire, outstanding and the capo di tutti capi of the struggle, he should be recognized and credited as the founder of Ghana. Because, again, his colleagues abandoned the course and even fought that course because Dr. Kwame Nkrumah's ideology did not align with theirs.

Nobody can take the credit away from the other galaxy of patriots in the creation of the UGCC. However, they mainly part-time nationalists who couldn't manage the party by marshalling the rallying masses in the right direction until Dr. Kwame Nkrumah came down to Ghana at the members of the UGCC's invitation. It is also important to realize that before the formation of the UGCC in August 4, 1947 for that sacred course, Dr. Nkrumah was already active in the vanguard of Africa's liberation as an executive of the West African students Union and the Manchester Conference of 1945.

There are some misinformed Ghanaians who hold the warped view that the Americans have founding fathers and not a founding father in the person of George Washington who became the first president of America. This misdirected citizens who belong to this school of thought argue that Benjamin Franklin, Alexander Hamilton, Thomas Jefferson George Washington himself and others, were all referred to as founding fathers of America. But it was so because, if you read the American history carefully you realize that they all were contemporary of one another, dedicated their lives to the same course. They all engaged in a sort of division of labour in drafting a charter on how the federation of the USA could be ran.

However, that wasn't the case in the Gold Coast. The fight deluded the likes of John Mensah Sabah and his cohorts. Besides, as I earlier stated, if by mere fact that because of John Mensah Sabah's participation in the struggle against the Land's Bill by the British Crown he must be part of founding fathers of Ghana, then the eight Fante Chiefs who engaged Commander Hill in the negotiation of the peace pact of the Bond of 1844 must all be founding fathers. Their birthdays must be recognized as well.

Dr. Kwame Nkrumah is the African of the Millennium according to the BBC survey because of his pioneering role in our independence struggle. And in my humble opinion, if the whole of south Sahara Africa is to celebrate their various founders' days, it must be on the birthday of Osagyfo Dr. Kwame Nkrumah who candled the spirit in most African leaders.

It will therefore be a gross miscarriage of justice orchestrated by depletion of integrity, to attribute founding fathership of Ghana to any other persons or dates other than Dr. Kwame Nkrumah or his birthday. And it must be founder's day and not founders' day. Which in my candid opinion must be celebrated on his birthday, September 21 and not August 4 that is unrelated to our independence (that marked the foundation of Ghana anyway).

Our dear president Akufo Addo should know man will not live in power forever. His commando-style approach to governance and deliberate attempt to use political power as a weapon of mass distortion of Ghana's history have only one more year to survive come 2020.

Man shall not live by power alone and Karma is not an April fool day's joke.

It is real and posterity is the greatest judge!
Long Live Ghana.
God Bless us all.
The Writer, Iddrisu Abdul Hakeem, is an MCF Scholar (Alunus) at KNUST.